Kentucky Kingdom To Re-Open in 2014 With New Attractions!

After four years of being closed, Kentucky Kingdom (previously known as Six Flags Kentucky Kingdom) will shine once again with big thrills! Today the park announced plans of a huge expansion featuring a new coaster and several new attractions!

After several failed attempts to revive the park, including an attempt by the owners of Holiday World, the park remained closed. The former operator of Kentucky Kingdom, Ed Hart, along with several other investors formed the Kentucky Kingdom Redevelopment Company. Their aim was to reopen the park by Memorial Day Weekend the year after funding and their plans were approved. After 16 months trying to get funding approved, that plan fell through as well.

On August 15, 2012, it was announced that Ed Hart of Themeparks LLC and the Kentucky Kingdom Redevelopment Company would be working to open the park by 2014. 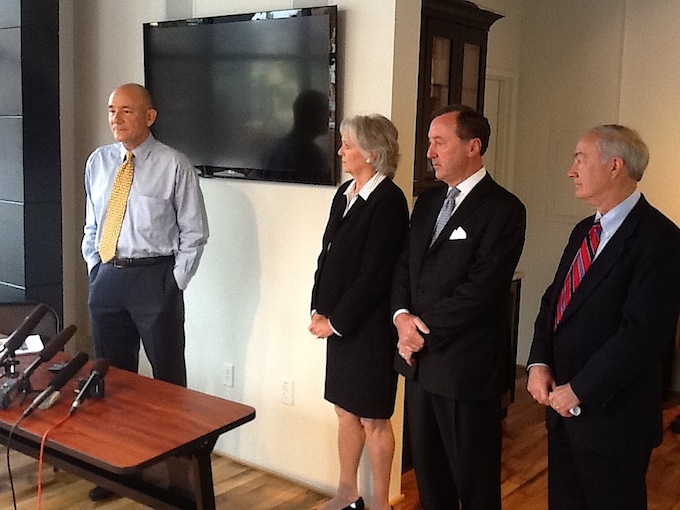 Yesterday, June 26, 2013, Hart made a public financial announcement as follows:

“Kentucky Kingdom has been closed for four long years,”.  “My partners and I are proud to announce our plans to spend $43.5 million to return the park to its former position as Kentucky’s number one paid tourist attraction.”

The partners in Kentucky Kingdom, LLLP will provide $28.5 million in capital for the purpose of redeveloping the theme park.  Of this total, $18.5 million is equity and the remaining $10 million is a loan.  The partners have formed Themeparks II, LLC as a special purpose entity to make that $10-million loan.  In addition, The Bank of Kentucky is providing a $15-million loan. 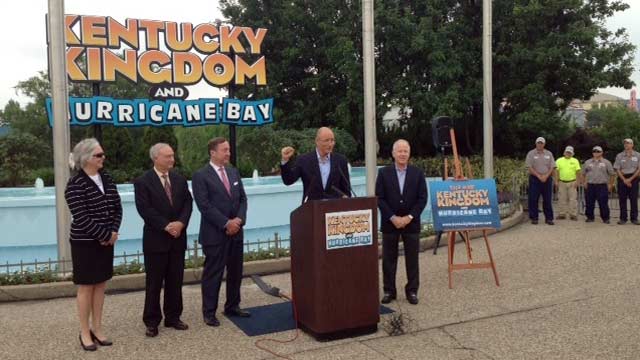 Ed Hart, President of Kentucky Kingdom, LLP, along with his partners Ed Glasscock, Bruce Lunsford, and the Al J. Schneider Company, today, June 27, 2013, announced the biggest expansion in Kentucky Kingdom’s 25-year history.  The announcement was made just an hour after representatives of the Commonwealth of Kentucky, Metro Louisville, the Louisville Convention & Visitors Bureau, the Kentucky State Fair Board, and The Bank of Kentucky signed the agreements required for the official reopening of Kentucky Kingdom.

Standing just inside the front entrance to the theme park, Hart remarked,

“The highlights of the new Kentucky Kingdom will be the addition of the first new rollercoaster in 17 years and a large expansion of the Hurricane Bay water park.  We are doubling the size of the water park, adding three new waterslide complexes, a 12-000-square-foot wave lagoon, and an “adventure river”, which is six times faster than the existing lazy river.  All in all, we will have one of the largest water parks in the region.”

“We will also reopen such signature rides as the Thunder Run wooden coaster, the Mile High Falls giant spill ride, the 150-foot-tall Giant Wheel, the rapid river raft ride, and the Thrill Park Theatre, as well as all of the park’s remaining rides and attractions.”

Added Hart, “We’re not stopping there.  In 2015, we will unveil a complete makeover of our suspended looping coaster, T2, and we are well on our way to converting the two intertwined wooden coasters known as Twisted Twins into a much superior ride, which will debut in 2016.  We will continue to introduce new attractions each season.  In fact, per our lease with the state, we have an obligation to invest as much as $2.5 million each year for as many as 70 years.  That would equal an investment of more than $200 million, including our initial outlay of $43.5 million.”

Hart thanked the Governor, the Mayor, the Metro Council, Jim King, other state and local officials, and particularly Dr. Mark Lynn, Chairman of the Fair Board, for recognizing the importance of Kentucky Kingdom to the state and the local community.”

Mr. Lynn commented, “Ed Hart and his partners, all respected local businesspersons, are the right people at the right time to restore Kentucky Kingdom to its previous success.  A full-scale renovation of the park’s more than 100 buildings and 40 rides is already underway.”

Be sure to keep an eye on our facebook and twitter feeds. We will be reporting on all the updates as progress continues on all the happenings at Kentucky Kingdom.