Summer is known for two things, heat and big blocbuster movies. While Kings Island has a sure fire way to beat the heat at their huge Soak City waterpark, the blockbuster summer movies are just a tad out of reach. Or are they? Beginning this month Kings Island will offer Dive-In Movies at Soak City. 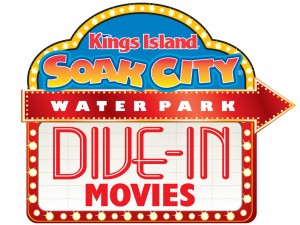 Beginning June 21st through July 26th as the sun goes down on Friday Nights, guests can pile into the huge 650,000 Tidal Wave Bay wave pool and catch one of the family friendly flicks free of charge. Either lounge in the shallows, float on a tube or just wade around as you watch one of the huge hits on one of two large screens.

The movies are included with theme park admission, and space is available on a first come, first serve basis.