Universal Orlando has recently pulled back the curtain on just a part of their all new Springfield area. Fast Food Boulevard takes the fictional shops and restaurants of The Simpsons and brings them to life in an all new way. An all new part of the area is scheduled to open later this summer, and incorporate all the flavors of Springfield into an all new immersive Simpsons experience. We recently were able to speak with the members of Universal creative and culinary who brought the world to life. 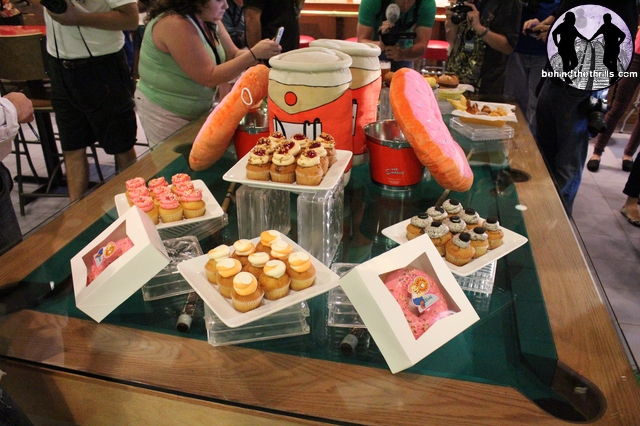 Donuts, cupcakes, burgers, all great food, but rarely are they something of a big deal. Universal’s all new Fast Food Boulevard, part of Springfield U.S.A. changes all. What is seemingly All-American food is taken to a whole new level as it is taken from the small screen and brought to life. Things like Krusty Burgers, Flaming Moe’s and Lard Lad Donuts take on a whole new life.

“What we wanted to do was make it as authentic to the fiction of the Simpson’s as we could” said Ric Florell Senior Vice President Operations as he held up a massive Simpsons Encyclopedia “We are trying to enhance the guest experience, not just to come into a building, but to actually experience it. It looks right, it feels right, so the authenticity to the fiction is extremely important.” 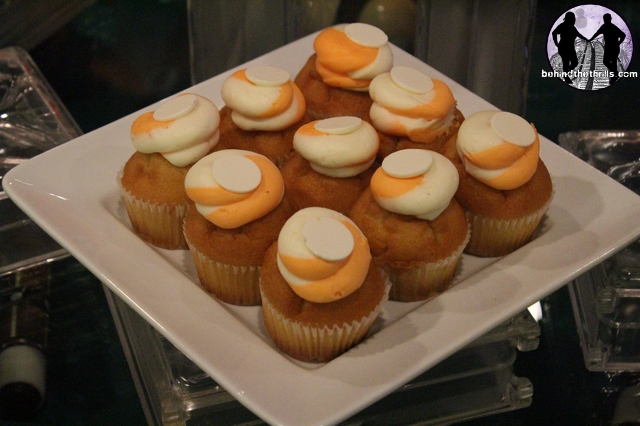 To get that authenticity right, the creative and culinary team sat down with show creators, including Matt Groening and had them sample everything that they were thinking of bringing to guests to make sure it actually met their standards.

“When we took everything out to the creators, there wasn’t ONE thing that they were overly impressed with, they were impressed by how much fun everything was.” said Florell “Between giggling at everything, they actually ate some of the food. They loved the Krusty Burger, they were intrigued by the Clogger, especially the writer who originally came up with it she said “That’s exactly what I had in mind when I put it into the show!” It was across the board.”

Universal’s creative reach doesn’t stop at the food, they took it to the authentic level when it came down to beverages as well, especially the beer.

“Duff Beer is an Icon of the fiction” continued Florell.

Duff Beer is the signature beer of the show and to bring that to life, they couldn’t use just any old beer, it had to be special. So they turned to Florida Beer Company, the same company that makes the parks Hogs Head Ale for the Wizarding World of Harry Potter.

“The only place in the world you can get this hand crafted beer is from Springfield.”

The other major part of the lore of the show is the signature drink called the Flaming Moe. In the show, the drink is alcoholic, and purple due to the cough syrup used. Naturally Universal couldn’t use cough syrup, and having something as special and as signature a Flaming Moe means that it has to appeal to as wide an audience as possible. But why not purple? Surely it could be dyed to make it look like the show? Well, maybe, but there’s a reason for the color.

“We wanted the drink to appear to be burning from the bottom up, so it looks more like a flame.” said Florell “It’s a smoldering of some really great stuff.”

While getting writer’s approval for the products that represent their show was important, it wasn’t the only driving force. We live in a time where every single park is now cashing in on things like food and merchandise tie ins to attractions. Sometimes they are just that, they are just tie-ins. They serve no other purpose, other than to move a plastic goblet or cup with a characters face on it. They can be moved to other parks, called another name, and have another character’s face on it.

Then you have other times when the food and beverages aren’t just tie-ins, but actual pieces of the story. You can’t have the Wizarding World of Harry Potter without Butterbeer..I mean you can but it will a place of very thirsty Muggles. And that seems to be the same case with Springfield. You can’t have Moe’s Tavern without Duff Beer, or a Flaming Moe. A Krusty Burger just seems to wash down better with a Buzz Cola. It’s all apart of the folklore, the story that the Simpsons crafts.

While coming up with the actual dishes and ideas were very important, if you don’t have something that tastes good and is different, you won’t have an audience very long.

Enter Executive Chef, Steve Jayson. He’s one of the chefs responsible for how the food tastes and is prepared in Springfield. While it’s very important to get the look of the food right, it’s even more important to get the flavors down perfectly. Flavor is the ultimate goal, and Springfield’s Fast Food Boulevard achieves the goal in buckets. From the various sauces used on Krusty Burgers, to the texture of the fried seafood, even down to the maple mayonnaise (sounds gross but is amazing) used on the Chicken and Waffle sandwich.

Chef Steve Jayson doesn’t just work for Universal, he enjoys the flavor of the food he gets to create. We recently spoke with him, and it was clear that he loves his work.

Watch the interview below, and watch him go from being interviewed, to be being genuinely excited about the food.

“We wanted to make the sandwich like Homer, he’s a big guy that’s very silly and sloppy” exclaims Jayson. He’s right, the burger is every bit as silly and sloppy as Homer is, and while it’s a very All-American burger, it stands out, just like Homer.

The new area is an amazing addition to Universal Orlando, not only because of the great work the creative and culinary teams put into research and approval, but because at the end of the day, they love what they do. Chef Steve Jayson positively puts his love of food and flavor into the food he helps to create. He loves to talk about it, but most of all he loves to create it, and he loves to see reactions. It’s a level of creativity that you can not only see, but you can also taste in every bite. It’s something that Universal has cornered the market on, despite the number of foam topped drinks that are out there.

For more information about Springfield’s Fast Food Boulevard, or any other information, visit the official Universal Orlando website by clicking here!