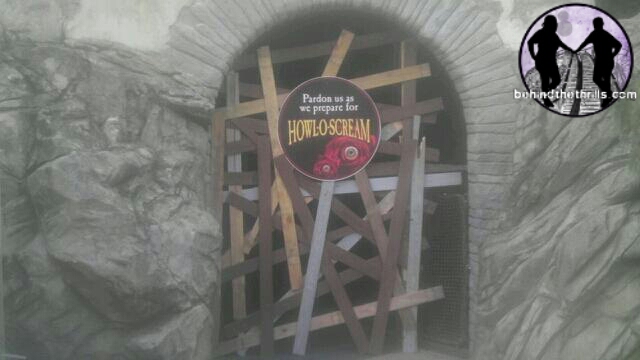 We were sent a photo this afternoon that Europe in the Air is closed to make way for Howl-o-Scream.

The building has been used for a few years in the past to house the park’s haunted houses in. In 2009, the park housed Cavern in the Darkness within the building, and then the following season, the ride opened as Europe in the Air (not Corkscrew Hill). The park also used the building in 2011 and 2012 to host 13: Your Number’s Up. The park has already revealed several returning houses for Howl-o-Scream, including 13: Your Number’s Up, which made it’s debut in 2011. With that said, Europe in the Air is probably going to be used to house it again this year.

Let’s take a quick look at some of the speculation that has swirled around the attraction since it’s sudden closure though. Keep in mind, these are just rumors and thoughts and may have no truth to them.

Budget cuts – According to Screamscape, SeaWorld Parks and Entertainment has seemed to kick off chain-wide budget cuts, which may have been a reason to close the attraction without notice before the busy July 4th holiday.

Ride problems – In doing some research on my own, the ride system originally installed for Questor was built by ReflectOne, which has since gone out of business. Several years later and several buy-outs later, the current company is BAE Systems of Tampa. BAE is now a company which makes military training equipment. We’ve seen rides in the past have been built and then years down the road, the manufactures have gone out of business. With the company out of business, when a part goes bad, it can cause havoc and keep the ride closed for extended periods of time while new parts are created to replace old, worn out parts. While sometimes the problem can be fixed, other times it’s easier to just rip out the system and come up with an all new attraction. Perfect example of this is when Earthquake closed in 2007 at Universal Studios Florida and became Disaster. Same ride system, only used in a diminished capacity.

We don’t know for sure if the ride is just closed so Howl-o-Scream can come to life or if there’s really another reason responsible for the closure of the ride, and we probably never will. It is unknown whether or not Europe in the Air will re-open for the 2014 season at this time. Stay tuned for more information.

For more information about Howl-o-Scream at Busch Gardens Williamsburg, visit the official website by clicking here.