If you’ve been following Howl O Scream at Busch Gardens Tampa, you’ll know that they are unleashing 13 evils at this year’s event. If you haven’t been, well, you’re in over your head now. There’s no turning back. So far we’ve met The Voodoo Queen (#6) and The Butcher (#4), both who will be in their own respective houses, both of which are all new for 2013. Now we get to meet two more of the 13, and where they’ll find you, no one knows. 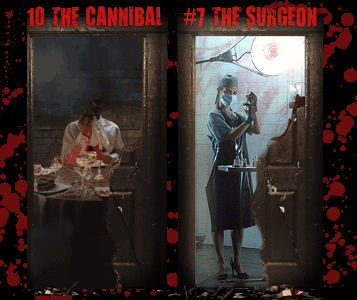 We’ve gotten a better look at Howl O Scream’s two newest evils. Who are they? What do they want with you? And most importantly, where will they fit in once all the madness starts?

She can fix whatever ails you. But she won’t. She takes her time, nice and slow, making a slice with every slash of the scalpel. Fortunately for you, you’re not who she’s after….so your ending will be quick.

There’s no clue about where we will see the Surgeon. Will she be in a new house, or will we see her in an existing house. While it would be great to see a each character get a house, it’s most likely we’ll see this one in Blood Asylum.

This is where the story gets fun. A young architect by the name of Herbert Jeffries goes to Fiji…no he doesn’t meet your mother there..we’ll get to that. Instead he meets a group of tribesmen who invite him to a unique dinner. When he returns home, he has an insatiable hunger for flesh…of the human variety. He quits his Architect job and instead goes to work for the local morgue, where he can divulge in his delicacy unnoticed. The only problem…it’s not exactly fresh. So he’s out looking for something a little more lively.

Where will we find Mr. Jeffries? It’s very odd to find a character with such a unique story nestled into an old house with several older characters…unnoticed. It’s very likely we’ll see him elsewhere, as we are told that the experience with the 13 will extend throughout the whole park.

The story lines are really catching attention this year at Howl O Scream. If the event lives up to the hype, this could be one of the best years yet. Rumors are calling for two new houses, and some new themes to some of the older ones. Also we could be seeing a new show and perhaps more roaming performances. Fingers crossed, because the effort being put into the story alone is a lot of fun.