The Walking Dead returning to Halloween Horror Nights in Orlando and Hollywood!

They rise from the dead, to scare the living hell out of you and make you one of them. Just when you think you’ve gotten rid of them, they come back yet again for one more go! The Walking Dead is a worldwide phenomenon, and last year helped Halloween Horror Nights in both Orlando and Hollywood break records. This year they’re coming back, and they’re even hungrier! 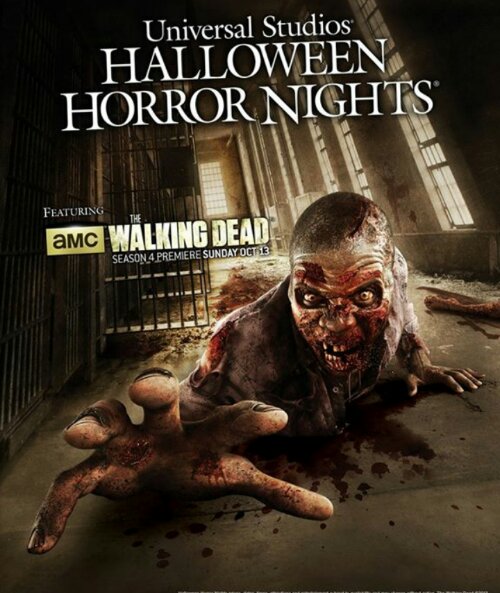 This year Universal is once again bringing the world wide phenomenon of The Walking Dead back to Halloween Horror Nights. Both Universal Studios in Hollywood and Orlando will once again share in the zombie goodness with houses based on season 3 of The Walking Dead.
Here’s Greg Nicotero, Glenn and Darryl with more info on the new experiences:

Guests will fight through hordes of zombies as the navigate through the prison that the survivors call home, and into the town of Woodbury. Everything isn’t as it seems in this haven from the apocalypse. Once you’re inside your thread of the Dead is over, but now you have to fear the living.

” What’s great about working with a property like ‘The Walking Dead’ is that each season presents new environments and characters for us to draw inspiration,” said John Murdy, Creative Director for Universal Studios Hollywood.  “With the prison as the main setting of Season 3, we seized this opportunity to recreate that very environment, down to the last detail, to be as genuine and authentic to the show as possible. Using movie-quality production value, our goal is to make guests feel as if they are mired in the world of blood-thirsty zombies, which is something you can only do at ‘Halloween Horror Nights.’”

Also this year in Orlando at Halloween Horror Nights 23, The Walking Dead will take over the entire Street Experience. Around every corner, on every street, on every side walk no place is safe from the dead. Where will you hide?

“The goal is always to surround guests with authentic and terrifying experiences,” said Michael Aiello, Creative Development Director for Universal Orlando’s Entertainment team. “The combination of ‘The Walking Dead’ themed street experiences and the haunted maze will make it difficult for our guests to escape the hordes of ravenous walkers they’ve seen on their television.  The moment you pass through our gate, you become a survivor fighting for your life.”

This is the first time in Halloween Horror Nights history thats universal has used one huge theme in all of the street experiences. While it may be upsetting to fans, it will be a delight to everyone who is a fan of the TV series. The show will be making it’s season 4 premiere on October 13th, right in the middle of haunt season.
While it is said the entire street experience will be Walking Dead, according to Rick over at Inside the Magic The Walking Dead will be the main attraction, but it will not be the only thing that guests will see in the streets. Other scare zones and properties may be used, but no word on what just yet. It’s very possible we could see Walkers all over the event, invading other experiences as well…or something a little more evil setting up residence.
Also in Hollywood, the Walking Dead will take over most of the park as the Terror Tram is transformed into the Town of Woodbury. You’ll see the governors head aquarium, Micchones pets and more!

Check out our video from last years Walking Dead experience at Halloween Horror Nights in Orlando:

For more information about the Walking Dead Halloween Horror Nights in Orlando visit the official website by clicking here!