There are only two naughty doors left. What horrors will they unleash when they are open? The 13 have been very busy preparing for Howl O Scream at Busch Gardens Tampa. The annual Halloween event has unveiled 11 of the 13, with the latest two revealing houses, and now the first scare zone of the season. 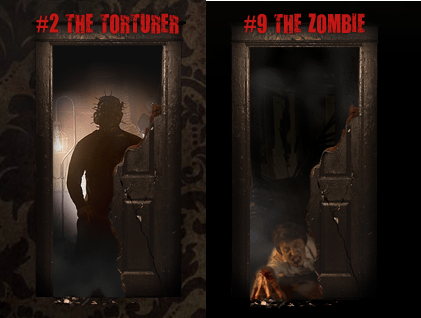 The zombie, or should we say Zombies, are back. The fourth house announced is yet another returning house. Zombie Mortuary is back for the third year. The house takes place in a funeral home, where the dead just can’t seem to stay dead. It’s a unique take on the classic mortuary theme, and has a few very cool scenes, including one where you get a feeling of what it’s like to be buried alive.

This guy likes your pain. He’s looking to inflict it, and he doesn’t care if you use a safe word or not. There are no safe words.

We are finally starting to see some Scare Zones as The Torturer, and the Hangman are both announced to be appearing in the all new scare zone “Pain Lane”. The area is being described as a “darkened alley”. How perfect would it be if the area was right by “The Basement”? At any rate, that makes a total of One scare zone, two new houses and two returning houses for Howl O Scream.

If the rumors are correct we should see just one more scare zone announced, and three more houses, including a new upcharge house to replace Alone.

Stay tuned for more as The 13 are revealed. Be sure to follow us on Twitter @BehindThrills for the latest information.