Greetings…You may call me keeper…for I am the Keeper of theme park tales. For today’s tale  you have to know some history, so come back with me….

July 20, 1969 10:56PM: a young storyteller lays on the floor in his PJs hypnotized by a grainy black and white image of a man slowly climbing down a ladder. Slowly, madingly, until his boot reached the last rung and he stepped unhesitant onto an alien world. That single moment linking his name to the likes of Drake, Magellan and Columbus….and ,what my younger self didn’t understand, to ourselves. To the spirit of adventure and discovery that humanity always craves. 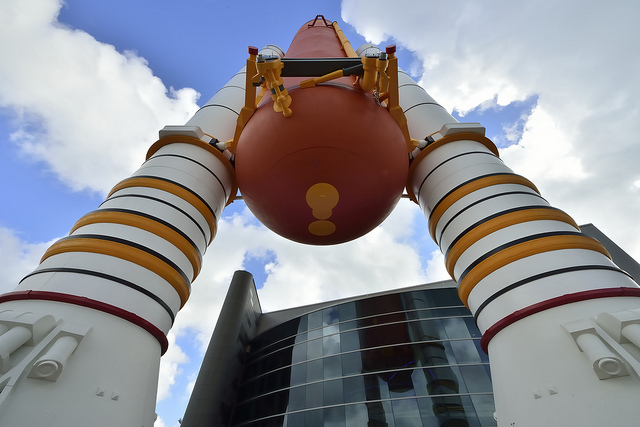 So yes, I have always been a fan of space, NASA, the astronauts and what they represent. No, I never wanted to be an astronaut when I grew up, no I didn’t build model rockets, and with the exception of a handful of mission patches, never collected space memorabilia as a child. Although this spirit of discovery manifests itself mostly in my theme park travels, the space nut in me comes to the surface whenever I visit the Kennedy Space Center.

I try to get out a couple times a year to visit, its close enough to Orlando, the annual pass is a good price, and it’s a slower paced visit compared to the glitz of Disney and Universal. It’s sad that its’ rarely mentioned by theme park sites and that the inspiring history is overshadowed by our fantasy worlds.

Keeper’s lightning fast tip-This might be a good time to speak about pricing. At BTT we try to not date articles by speaking of specific pricing but I need to do so to illustrate a tip from your pal Keeper. Even if you are NOT planning on going to KSC this lesson can be valuable at other attractions. As we all know with the advent of new adventures comes higher prices, KSC not only adjusted its prices but also added on a parking charge where before parking was free. One day admission is now (August 2013) at $50 and annual pass is at $63. Pretty easy if you plan a return trip within a year but I would suggest even if not this might be worth looking in to if you purchase your tickets in advance of your trip. Let’s say that you are coming with a guest—easy two tickets at $100 but there’s that parking thing to deal with too so let’s make that $110. If you buy one annual pass for yourself at $63 it will cover your parking making your total $63 + $50 or $113. Still $3 more this way but your annual pass gives you 10% off merchandise and 20% off food which will easily put you ahead in the price wars…food for thought.

Anyhoo my goal for today’s adventure was, of course, the new Atlantis exhibit and it illustrates everything that’s good about KSC. I was in the park the day it was announced that they were getting Atlantis and the unbridled joy that the staff had, from the people cleaning the rest rooms, to the cashiers, to the tour guides, to the managers…showed their pride in what they are …and in what the shuttles legacy is to us. I knew Atlantis was in good hands but they exceeded even my expectations.

You enter into a big dramatic building and work your way thru the high-capacity walkways reading quotes about the shuttle program that decorate the walls. After a wait you are let into a pre-show where you follow a pair of scientists thru many, many years (and hairstyles) as they illustrate the teamwork and planning involved with getting the first shuttle off the ground. After that you go into a unique theatre where you stand and watch a film that showcases the strength and size of the shuttle and illustrates a lift off. This theater is worth discussing, as it’s a bit different from those we’ve seen before. The closest thing to compare it to, would be a cross between Disney’s circle 360 theater, and Sea World’s Turtle Trek theater. The image is in front, on your sides, and above you, and is projected on stylized ribbons of screen that mesh together as a canvas for the images. When the shuttle “flies” over your head and the speakers kick in, it really makes the design shine. At the end of the film the dramatic music plays as the screen goes black, the front screen becomes transparent and you see Atlantis, in person, suspended before you. Just when the audience has soaked that in the music swells, the screen raises and you walk into the main exhibit. Well at this point I had completely regressed but I would suspect that it would be hard not to feel proud to be an American…scratch that…proud to be a member of humanity, when looking up to see what we truly are capable of. Between Atlantis itself and the dozens of interactive exhibits you could easily spend a couple of hours, and a hundred photos in the two floors dedicated to the shuttle. You can examine facts about the shuttle, watch a movie that explores its historical significance, get a picture in a cockpit and even do some simulated space walk tasks in a spacesuit. The icing on the cake is the skillful way this building was constructed to butt up to the existing Shuttle Launch Experience ride. This popular attraction is now enclosed by the Atlantis exhibit, and makes an incredible finale to this must see attraction.

KSC anticipated this attraction to be a huge draw and did a lot of extra work all around to really bring the center up to the next level. Earlier in the year they added the Angry Birds exhibit which is a cute, low-tech diversion for the younger fans with the hidden surprise of a decent, but small, laser maze…which is something that Orlando does not have in any of its attractions. KSC also made a new more dramatic entrance way with a fountain, music, lighting and new ticket windows and gift shop. The park entrance which used to be more towards the center of the park is now at the far end near the rocket garden and Gemini exhibit. This is a subtle twist that lets guests enter in the past and as they move through the park they next encounter the buses to the Apollo exhibit, which exits right outside the new home of Atlantis, which is nestled in the shadow of the astronaut memorial. Maybe that’s the best way to sum up what NASA as always stood for, even before my younger self fully understood it. They help educate us by honoring and celebrating the past while always moving and inspiring us toward our future and feeding our adventurous spirit or as I like to say…..

For more information about Kennedy Space Center, and the all new Atlantis Exhibit, visit the official website by clicking here!