Goretorium was praised by creator Eli Roth as the “Disneyland of haunt fans”. Unfortunately, the blood has stopped splattering and the chainsaws will no longer rev through the hallowed halls of Goretorium as of October 2nd. The year round haunt has announced, via their official Facebook page, that they are closing their doors. Eli Roth himself will be on hand for one last round of haunts as the horror shop on the Vegas Strip closes it’s doors for good. 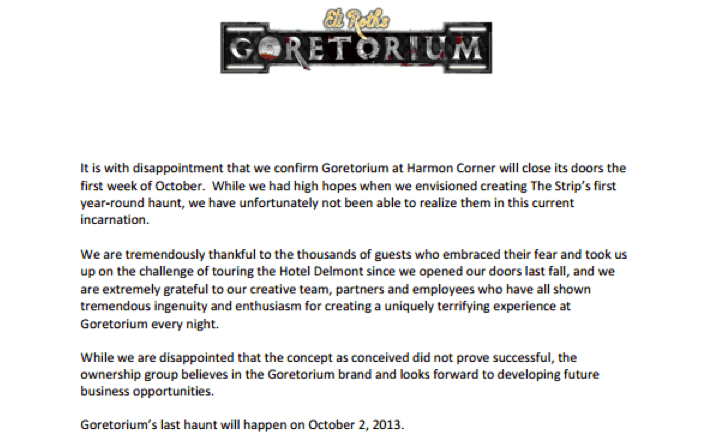 Pretty much from opening, many critics had lauded Goretorium, and said that it would not work. In recent months, legal troubles started to follow the haunt as several firms and former employees began filing lawsuits. The rumors started a few weeks ago that Goretorium would close at the end of October, but then more rumors came saying that it wouldn’t make it a full year, as it would close at the end of September. Goretorium officially opened on September 28th, 2012 and will close 369 days later.

The haunt opened in gruesome haunt style as Goretorium sent out gifts to select members of the media announcing the opening. Check out our video of the Goretorium media gift:

The haunt was more Vegas than Halloween and featured several Vegas touches like gored up show girls and a great view of the Las Vegas Strip. While we had a positive review of the haunt (click here to read our coverage of Goretorium!) many others did not, which added to the troubles. The haunt did feature several huge events, however, like a vampire Halloween party, a countdown to the Apocalypse on December 21st 2012, and of course A very Gory Christmas.

Still, just because Goretorium is down, don’t count them out just yet. The official Facebook page has said they will return, and will come back soon with a pop up haunt:

It is with disappointment that we confirm Goretorium at Harmon Corner will close its doors the first week of October.

Eli Roth himself will personally be there tomorrow night. We’ll also be having $10 haunts and $2 drinks. It’s not goodbye, it’s more like “see you later”. We’ll be having a special pop-up haunt coming soon.

Thank you to the 1000’s of guests that have supported our establishment over the year.

Most year round haunts don’t last forever,with only a few exceptions. Perhaps they’ll be back with a more seasonal offering, and a more hardcore haunted attraction in the future.

We will have to see what happens to Goretorium in the future. Hey Eli, I hear Orlando is ripe for the picking!

Stay tuned for more on Goretorium as it develops. Be sure to follow us on Twitter @BehindThrills for the latest info!

What do you think? Should Goretorium try again in Vegas? We want to know in the comments below!