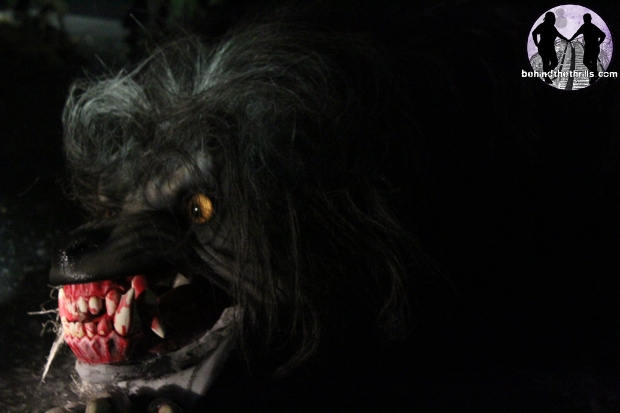 An American Werewolf in London is a classic 1981 film directed by John Landis. The film tells the story of two friends who backpack across Europe, and are viciously attacked by some kind of creature. One is lucky and dies, the other one..well he ends up with a terrible affliction. The film was a breakthrough in the realm of creature effects and even special effects. It was done in a day before CGI was invented and everything was done with physical effects….which means everything you see in the movie, actually happened. It was the groundbreaking transformation scene that gave make-up artist Rick Baker his first of many Oscars. 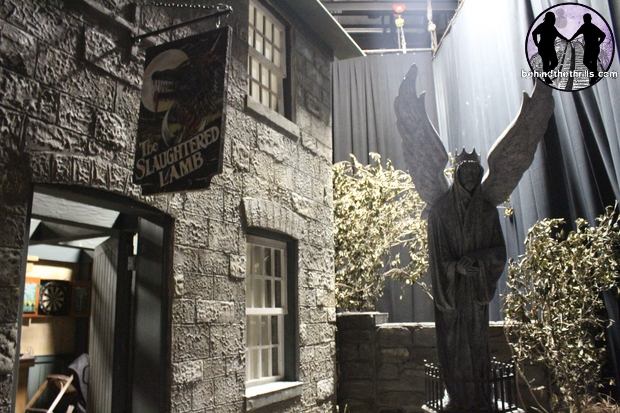 Fast forward 32 years and you finally have the haunted house version of it at Halloween Horror Nights 23. This wasn’t the first time the house was tried, in fact it was the third. When the creative department files permits, they give each house a code name, as to keep the identity of each house a secret. This house was called “Trinity” because it was the third time they had pitched the idea to director John Landis. The director had turned it down, not thinking that a haunted house could possibly do the film justice. It wasn’t until he came to the event and was sent out screaming that he was convinced.

The first thing you see as you walk into the maze is the facade, which is the Slaughtered Lamb pub. Everything that happens in the house, happens in the movie. The first few rooms, there is nothing happening, no actors, no scares. It’s one of the first houses that has done this, just to build up the story. What you hear and see instead are clips from the film, and scenes recreated down to the writing on the wall. The designers built the story going from the pub, right up to the first attack scene using only sounds, and smells. As you leave the pub and go down into the moors, you go through three stages of darkness, until you pass right by the graveyard. 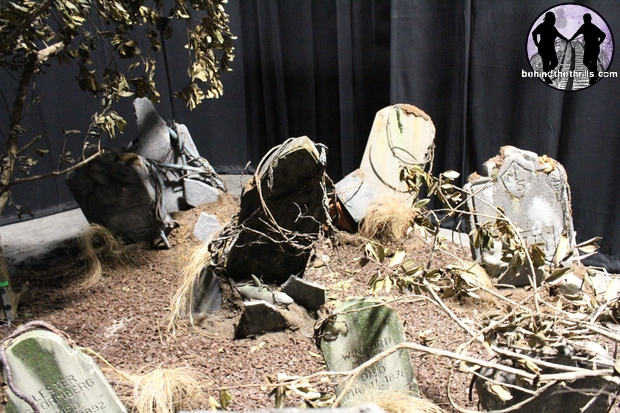 The graveyard itself is made up of props from old houses, and scarezones. You’ll see tombstones used from Dead Silence back in 2007, as well as Winter’s Night back in 2011. Scattered among the graves are little tributes to King Kong and JAWS, both former attractions at Universal Studios Florida. 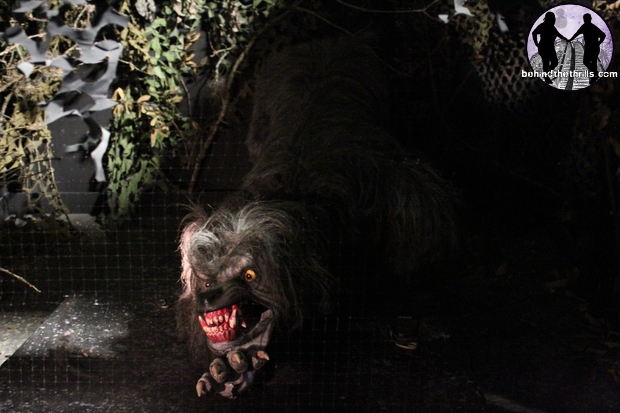 The first werewolf comes in at the moor attack. You’ll see an actor laying on the ground as the puppet lunges around on top of him. Yes, these big menacing beasts are really just puppets with very fluid controls. The actor can out as far as he needs to go in order to make a great scare. This particular scare comes from the sheer surprise….but it’s not the only one in the scene. 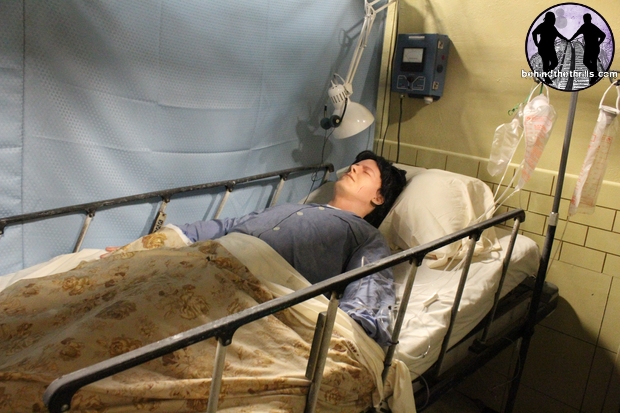 The next scene that you walk into is the hospital scene. While it could be more effective to have an actor lie in the bed, this scene is meant to depict the horrible nightmares that David has once he’s been bitten, so we see a sleeping David. This is a great place for scares. 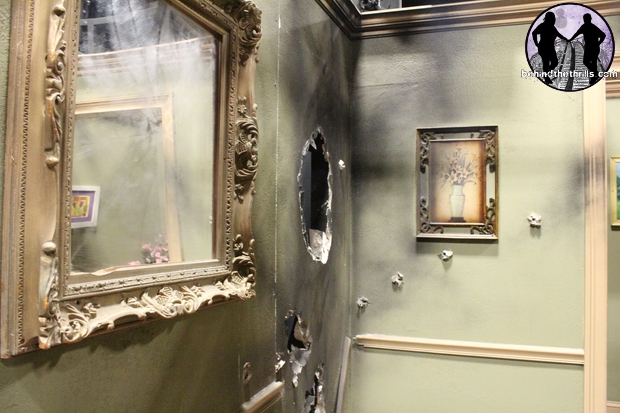 The scene in the dream sequence has David dreaming about Nazi’s…because he’s Jewish (tour guide’s words not mine!) and that’s the sterotype that the film makes is that all Jewish people have nightmares about Nazi’s. Of course, this is a movie and it’s meant to be a horrific comedy. The design team had realistic bullet holes in the walls, and even a huge hole in the paneling. When guests looked through the hole, they would be able to see the backstage area, so to keep guests in the movie they painted the behind the hole to match the rest of the area. 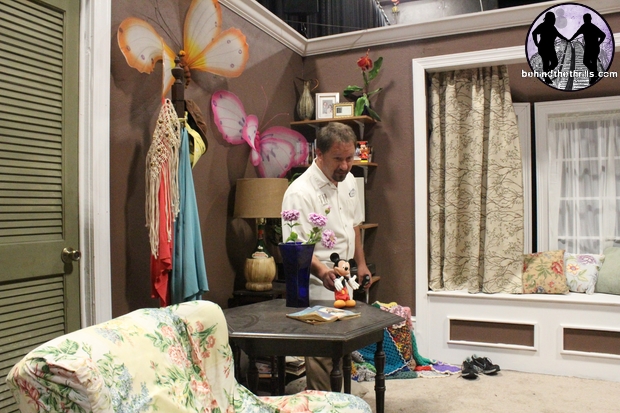 There’s a hidden Mickey in one scene of the house…a hidden Donald too! No, this isn’t some little dig at the competition down the street, this was actually in the film. The transformation scene is done identical to the film, and yes, you see a hideous werewolf transformation right in front of your eyes. 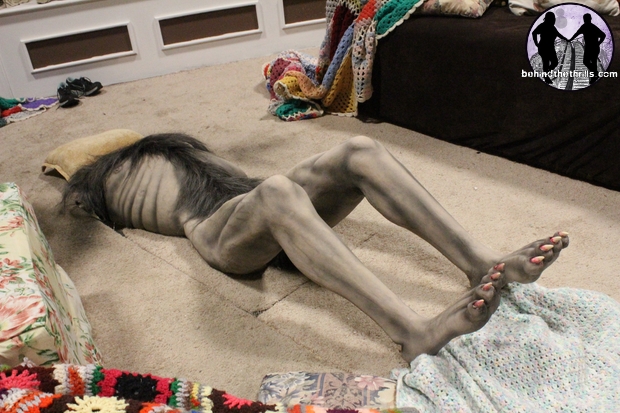 There is a very well hidden trap door right there in the floor that allows the actor to blend in with the animatronic wolf body. The actors top half is exposed, leaving him free to act and thrash, while the bottom half is covered by the floor. The creative team doesn’t want people to be taken out of the film, so when there’s a cast change, they simply close the doors and bring in a new person. 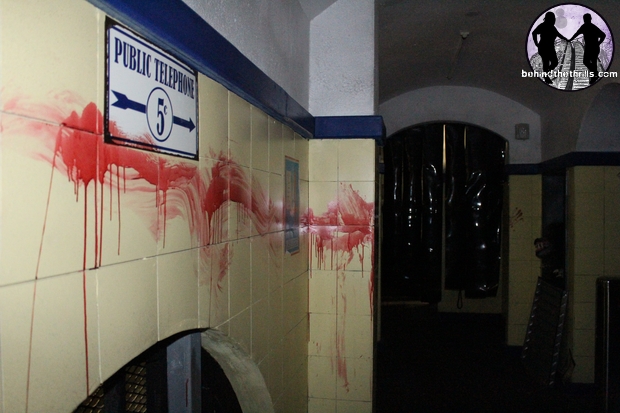 The design team stuck so close to the film that they built a full sized replica of the Tube station from the film. All the little things from the 80’s are there like payphones and cigarette machines. And oh, yeah, there’s a werewolf! They use a cool projection shadow technique to give the feel that the wolf is lurking around the corner. And the biggest thing about this scene, there’s a roof! While that may not seem like a big deal, most houses at HHN have been just scenic pieces, meaning that they are only built as tall as they are effective. If you’re not paying attention to the roof, why build it? In this scene it was very important to create a very claustrophobic environment, and to create the look of the movie. 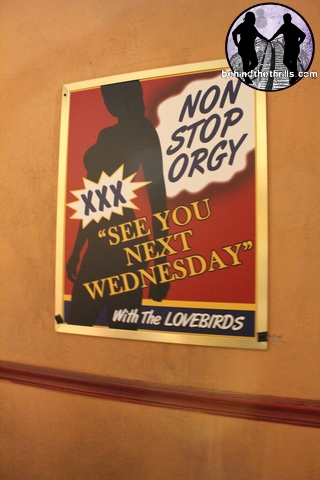 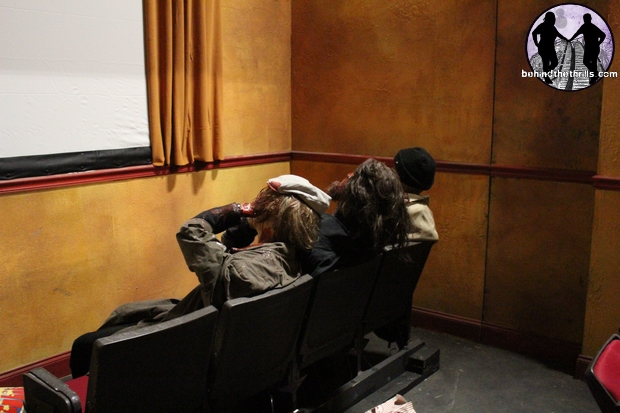 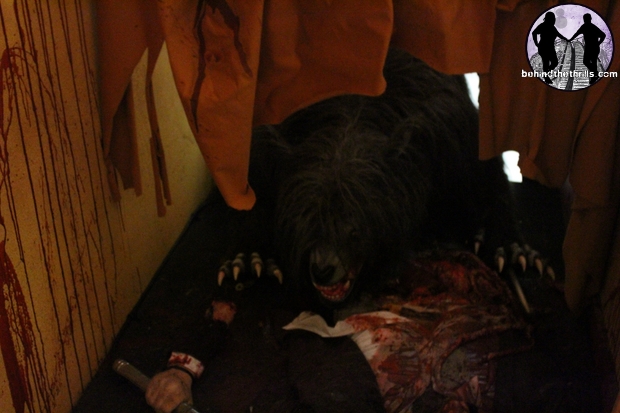 When you see the next wolf, he has a little snack from the lobby. That Usher isn’t just some random nod to HHN Past…it IS HHN Past. One arm and torch of a Mr. Julien Brown, also known as The Usher from HHN 19. 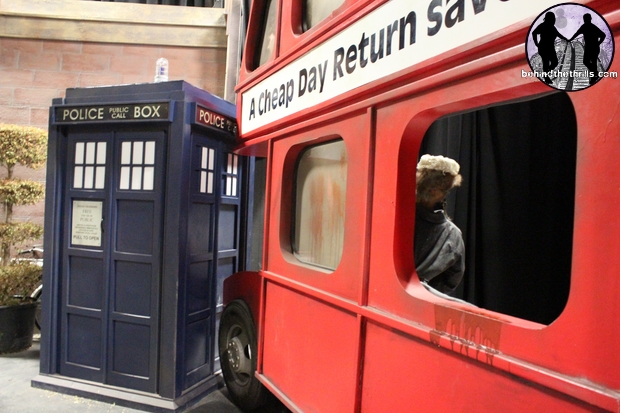 Piccadilly Circus is recreated beautifully in one of the last scenes of the house. While you may be saying “WHO!” it could be a just an ordinary police call box! There is also a double decker bus, and a hidden raven. For some reason there are ravens hidden in every single house this year. 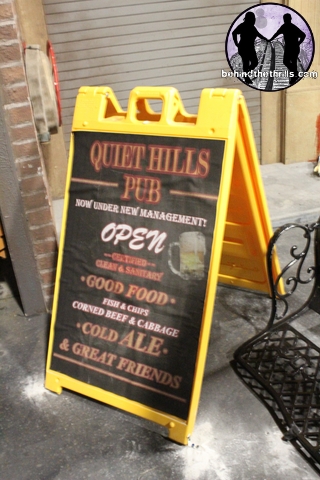 There’s also a subtle nod to a HHN house last year. Can you guess which one it is? The Unmasking the Horror Tour is good to see all the little details like “Quiet Hills” that you may not notice as you go screaming through. 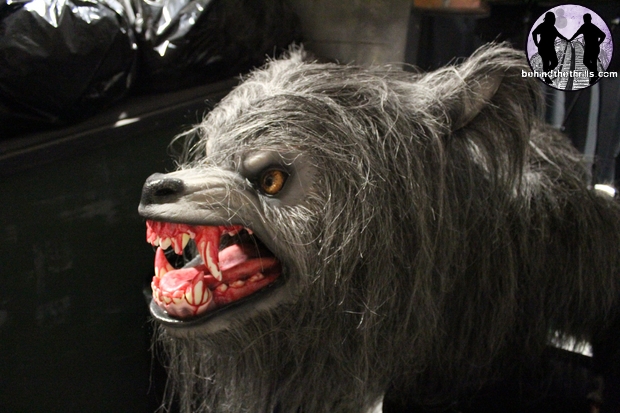 Once again you catch a glimpse of the werewolf as he is being dispatched by the police officer. It makes for a great last reminder that this film is still terrifying after 30 years. It also gets our vote for the best house ever at Halloween Horror Nights.

Check out even more little details in our Unmasking the Horror slideshow!

Can’t view the slideshow? Click here for all the picture goodness!