You may call me….Keeper….for I am the keeper of theme park tales….

Many have already shared opinions and reviews on this year’s Halloween Horror Nights in Orlando and your pal, keeper doesn’t like chiming in on a topic unless he has a perspective on it that might be worthy of your time. An interesting revelation for me this year that I thought I’d share and it, I hope, is of equal interest to those that have not gone to this event. 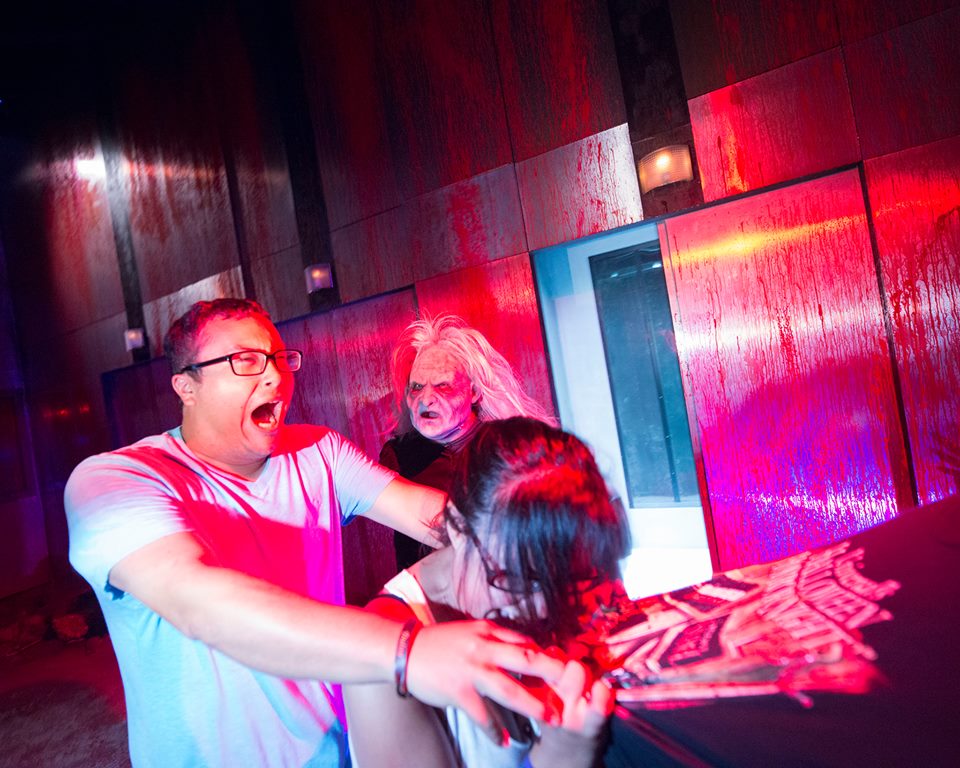 I, like many, cringed when I saw an abundance of IPs (intellectual properties) being announced for the event this year. I’ve studied the event since the start and have learned to not make judgments without experiencing things but have always felt that the creative A & D team is at their best when dealing with their own tales and not someone else’s.

This year in a darkened part of the Cabin in the Woods house I had a moment. A revelation on how at times a well constructed IP house can take the haunt experience to the next level. I call it an OH “FUDGE” MOMENT !!

I should explain…I use the term FUDGE as Ted Mosbey might when cleaning up a story he’s telling to his kids or like Ralphie might when he’s worried he had shot his eye out after finally getting a Red Ryder bb gun. When not on these pages as Ted would say “but he didn’t say fudge kids.

Anyways where was I, oh yes Cabin in the Woods…I walked around the corner and was standing in the bloodied elevator corridor. Now don’t mistake me, not A bloodied elevator corridor THE bloodied elevator corridor. The lights were flickering, there were human remains on the floor and walls, noise of screams in the background and then BING a noise to my right as the elevator opened right in front of me. Powerful stuff my friends, an OH FUDGE MOMENT that could not have happened without the backstory of the movie I brought into the house with me. With an IP the design team does not have to explain their story in detail and can concentrate on details that enhance the groundwork already laid by the film, book, or video game makers.

My first memory of this was the Saw house a few years back, again walking around the corner and I was in THE BATHROOM….I said it out loud …OH FUDGE!! I find that it’s the only way I can express where my head was at that moment in time. I was transported from a plywood tunnel with actors jumping out at me and INTO one of Jigsaws traps. That’s powerful stuff my friends, stuff that would not be possible WITHOUT the IP that came before.

There have been others, the pool room in the Thing, the Welcome to Silent Hill sign, the iconic girl under the floor in the Evil Dead, the governor’s fish tanks, and pretty much EVERY SCENE in the American Werewolf in London house. I mean I was IN the Slaughtered Lamb, the cinema, the subway, the moors, and the amazing Piccadilly Square!

Remember, my friends my message is always consistent on this weather criticizing Mystic Manor (See Story) or praising the Be Our Guest restaurant (See another Story). Its story, story, story that take a ride or show to the next level and make them an attraction, and event, an experience. A ride gives us a momentary thrill but a well woven story, ahh well that’s what stands the test of time. That’s what’s passed down thru the ages from generation to generation.

Yes, I will still mourn the loss in the quantity of original houses; and I will still sing the praises to the top of the lighthouse of original adventures like those in Orphanage, The Skool and countless others. But let’s face it, IPs sell tickets and the event is not just for us fans but for a general public that needs a known commodity to draw them in. IPs are here to stay so let’s embrace them, keep an open mind and use them to bring ourselves deep into their stories to fully experience all that they have to bring to the event.

For your own “oh fudge” moments, visit the official HHN Website by clicking here!

TAGHalloween 2013 HHN 23 Keeper's Tales
Previous PostHarry Potter and the Hogwarts Express on track at Harry Potter for 2014 expansion! Next PostMondays just got a new enemy as Garfield set to come to a theme park near you