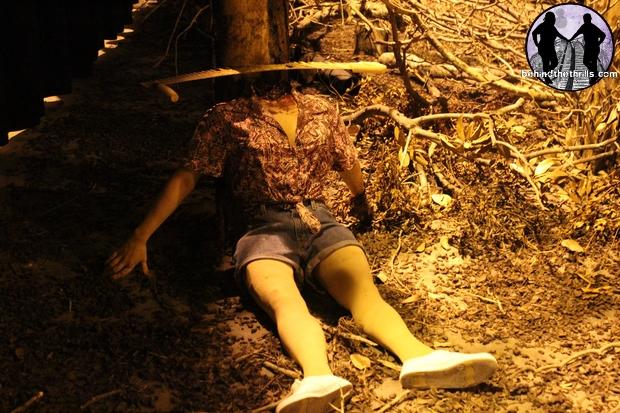 Unmasking the Horror Part 2-The Cabin in the Woods

The Cabin in the Woods is a 2012 horror film written by Joss Whedon and Drew Goddard and directed by Drew Goddard.  The film takes the very predictable story of five friends who go to the woods and puts a new spin on the classic horror genre.

The cabin is only part of a ritual sacrifice to the elder gods that we must make of young people every year in order to keep the gods at peace and continue our way of life. Every country has their own way of doing things, but they’ve all failed so far this year and it’s up to the United States to get the job done. Unfortunately things don’t go right.

In the house we are sent in as camera repair people and must help get things back on track before the gods rise up against us and destroy humanity as we know it.

As you walk in, you start to notice trees and a setting in the woods as we walk into the cabin. The trees are real, and are coated with a special flame retardant to prevent wildfires…in a soundstage. 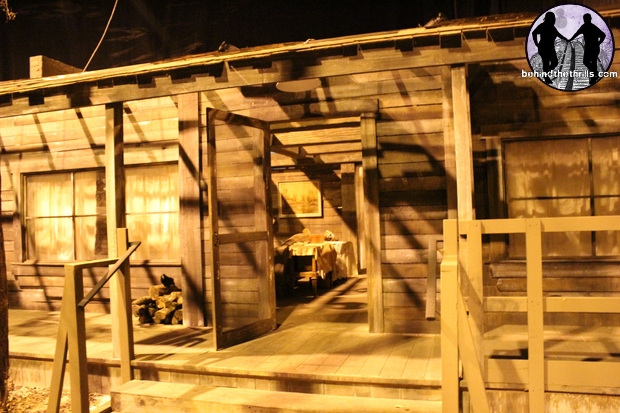 AS you walk into the cabin there are several things to note here. First off, this is an exact replica from the movie. Also there is a raven hidden in the scene somewhere. For some reason there’s a raven hidden in every single house this year, but no one knows quite sure why or where every raven is. 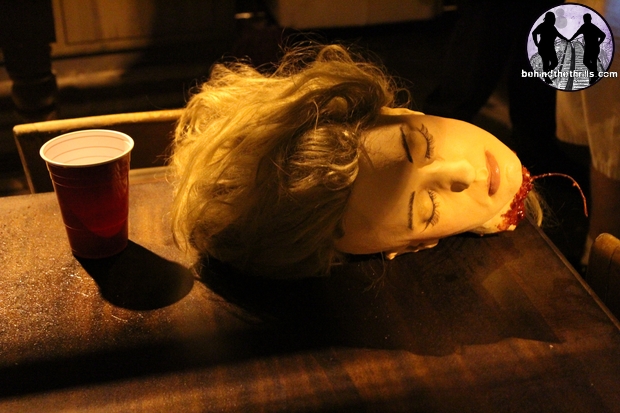 Pay close attention outside, and you’ll notice that there’s a body missing a head. You’ll see that head again as soon as you enter the house. Many miss it because they are petrified beyond belief by what is happening to it. There’s also a great scare set up on the couch that uses a prosthetic back and an actor. 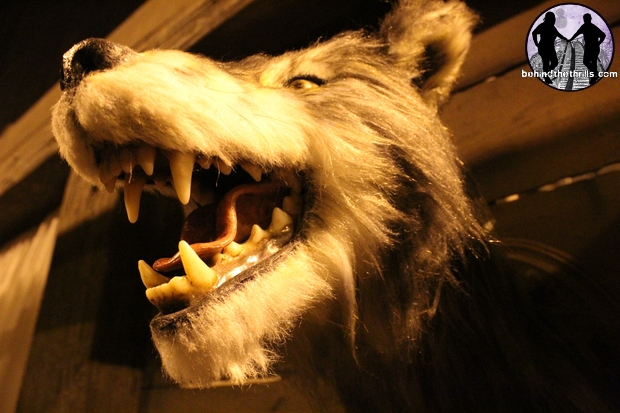 I dare you to make out with that Moose! A very familiar scene is recreated here. In the film, they wanted the actress to enjoy making out with the wolf head, so they used a special flavoring. In the house they want people to avoid recreating the scene so they made it a little higher up, and flavored the mouth with something gross. 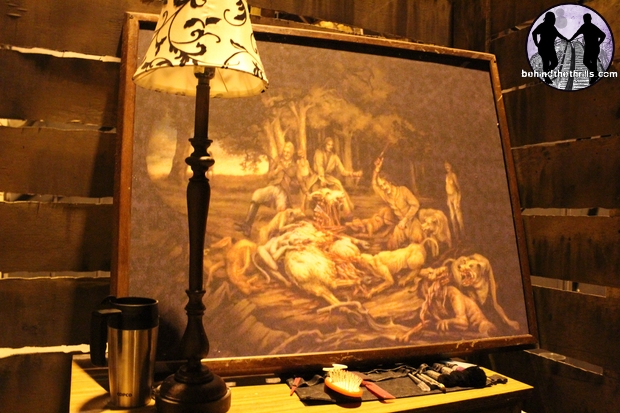 The painting that gives the kids that uneasy feeling is also there. In the movie there was a special cup that had a duel purpose (say it with me…a BONG!) that cost over a thousand dollars to make. They have the same cup, that cost about four dollars…of course, it’s just a cup. 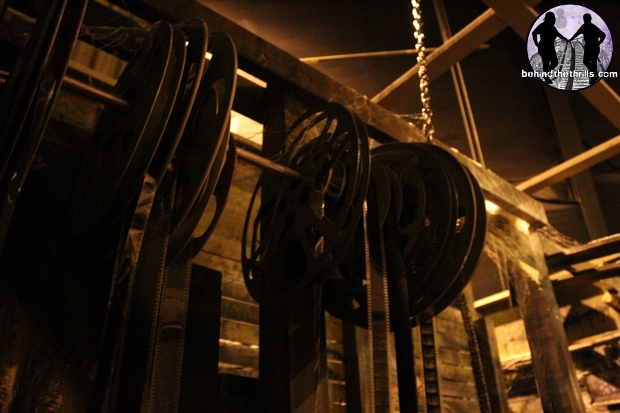 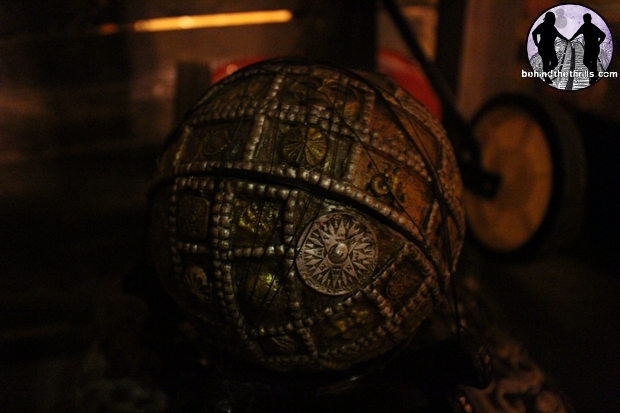 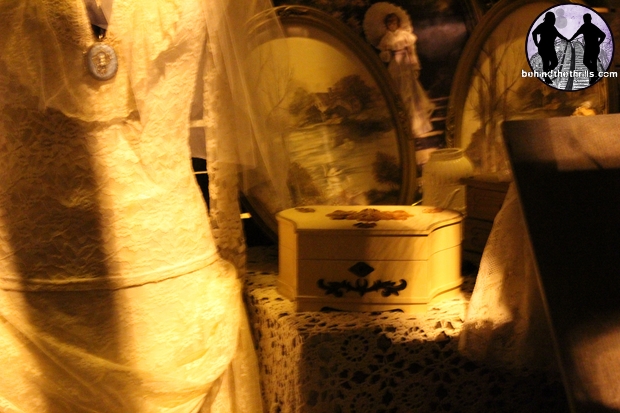 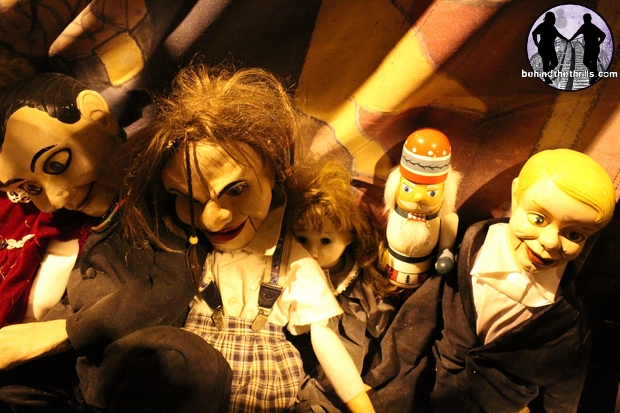 The basement is a lot of fun, simply because there is so much hidden there. In the movie, the kids go down into the basement and basically choose their destruction. Here it’s just filled with all kinds of cool props from both the movie and Universal’s past. There’s the puzzle ball, the conch shell, the dress and of course the book. There’s also a film hanging which is actually Alfred Hitchcock’s Psycho. And of course the dolls are from Dead Silence back in 2007. There are scares in this room so trying to get a good look is next to impossible. 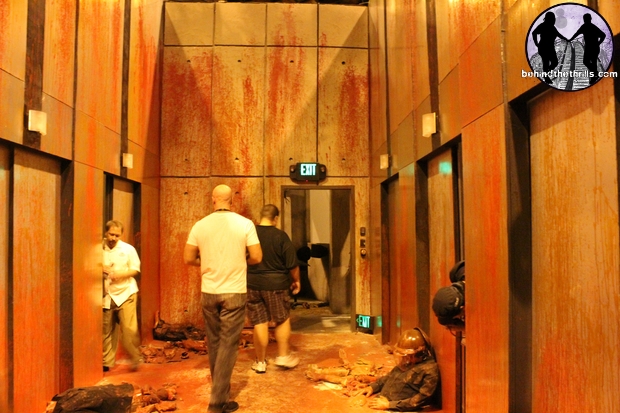 The glass cube room makes way to the elevator room. There’s not a lot of secrets in either one, but there is a lot of blood guts and gore. The elevator doors are slid open from the inside and the actors pop out from one of two possible locations. There are also actors on spots in the floor that can reach and grab at you. 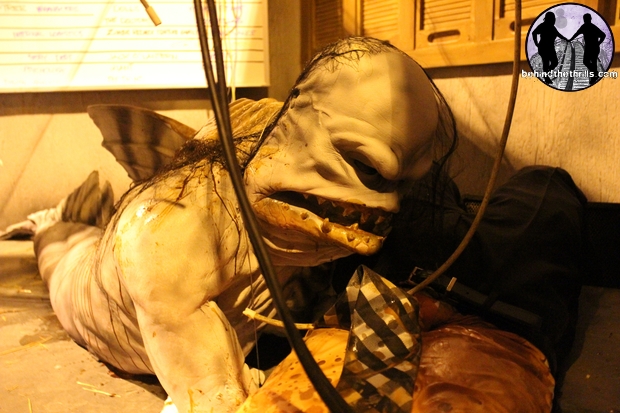 The control room takes you to all the chaos that has finally broken down the barriers, and now you’re just running for your life. On the wall of monitors are videos from the film that show different nightmare creatures, as well as the unicorn! Yes the unicorn is here! And of course then you have the merman who is munching down.

In of of the final rooms you find tentacles hanging as you are inundated with scares. You also will find a sign from a past house, Zombiegeddon in 2010. It is  a nice little touch that gives fans a nod as well as makes use of a sign. 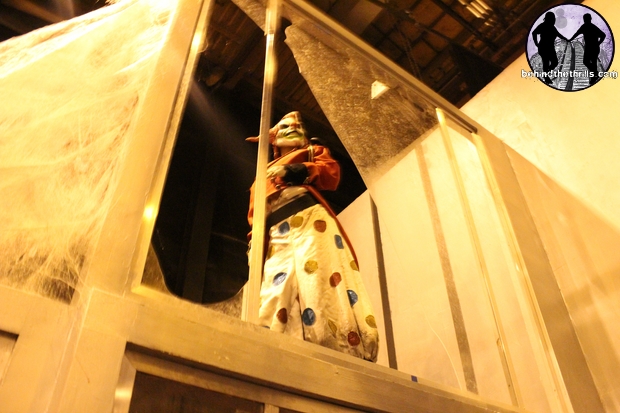 The final room has all hell breaking loose, and you find all sorts of creatures roaming and popping around. You see several creatures from Universal’s past, such as The Thing and The Strangers…but if you look close you’ll see the Caretaker and even Jack!

The final scene is nothing but chaos and has tons of things happening from all directions. Get a glimpse of more pictures in our slideshow below!

Having trouble viewing the slideshow above? Click here to see all the picture goodness!

Now that you’ve seen the terror with the lights on, and the horror unmasked, take a look at the Cabin in the Woods the way it was intended to be seen…with the lights off!