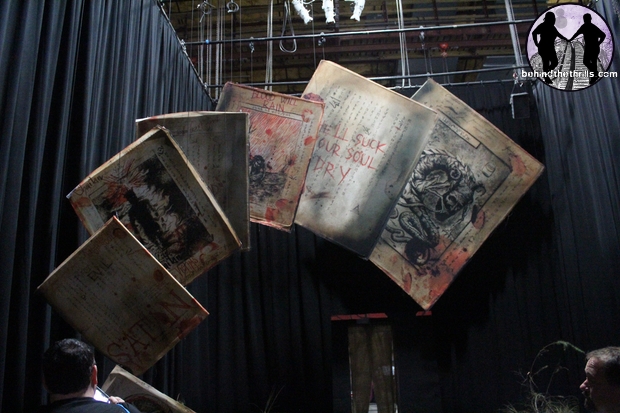 Unmasking the Horror #3-The Evil Dead

Evil Dead started life as a film in the 80’s that was before it’s time in terms of gore and story. The film directed by Sam Raimi spawned two sequels that went down the path more of comedy than horror and has been cemented as a classic trilogy. The house takes the story of the 2013 remake/reboot/reimagining which was a huge commercial and critical success, and brings it to life with shocking detail. The house is also featured at Universal Studios Hollywood, but unlike that house, this house takes a more organic approach. In the Orlando version the facade of the house is the book of the dead, and you make the poor choice of ignoring the warnings and entering tje pages of the book of the dead. As you enter you hear the voice of the professor reading the book, and unleashing the demons. In fact the characters of the film are a warning themselves. Danielle, Erik, Mia, Olivia and Natasha are the five friends…take the first letter of their name and you get DEMON. Is that going to stop you? 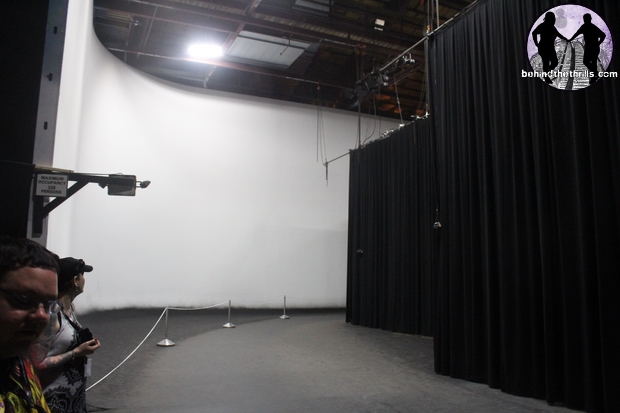 The actual first thing guests see is the infinity wall, which is used to set the mood. The wall is actually used the rest of the year to shoot commercials amd shows. The wall helps the film wrap down and give the impression of a never ending roadway or water way. 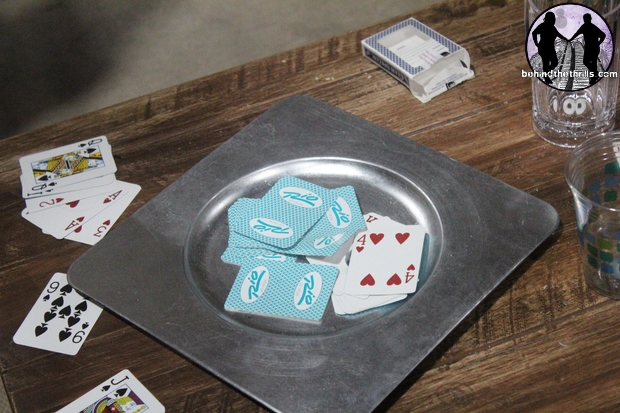 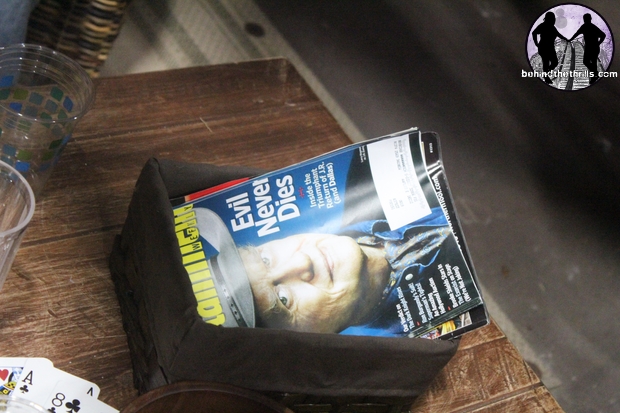 Evil Never Dies seems to be a common theme in Evil Dead from the house itself, all the way down to the props that are used. From board games, and playing cards from last year’s Penn&Teller Newkd Las Vegas even to Dallas returning, there are little nods to just about everything evil to prove the point. Even the VHS tapes are from Swamp Thing which was produced at Universal. 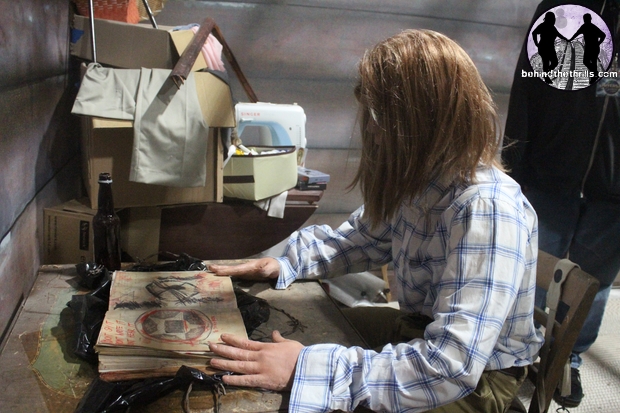 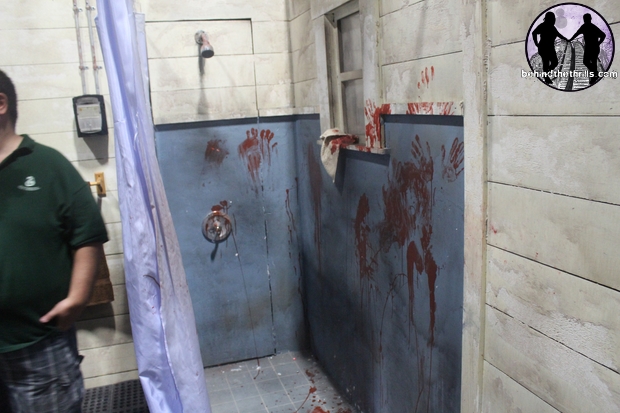 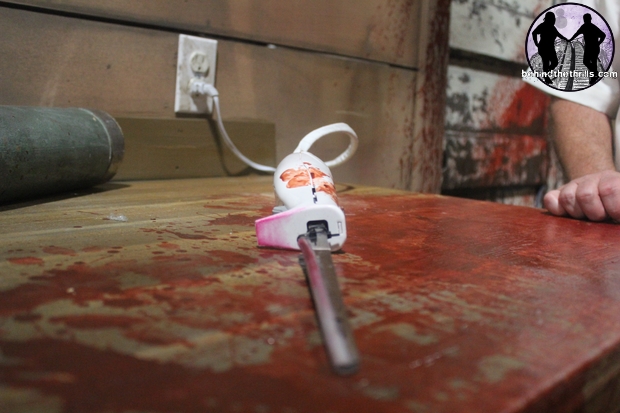 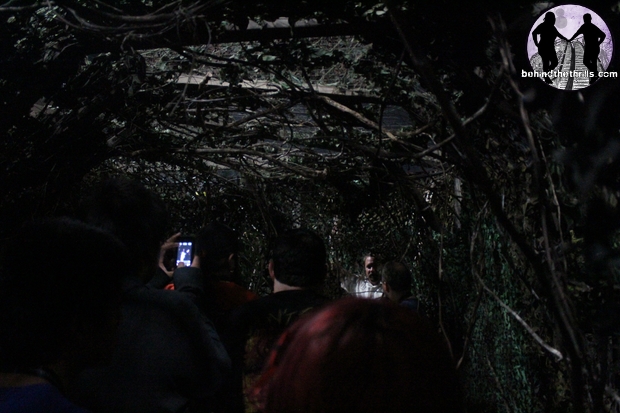 The house takes some of the most iconic scenes from the film and brings them to life in ways you never thought imaginable. The scene in which Mia is raped by a tree is done by having an actress tangled in vines amd thrashing around with strobe lights. The shower scene has so much fake blood and water that the floor has to have special mats to keep guests from slipping and drains. The scene in which a girl cuts her arm off is done with a fake arm and a very real electric knife that has a guard in place to give the ultra realism, and remain safe. 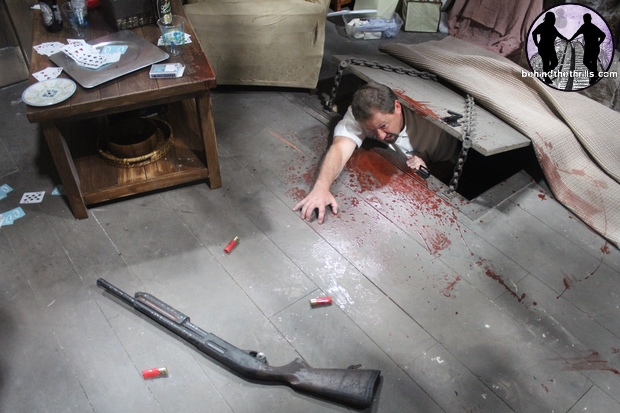 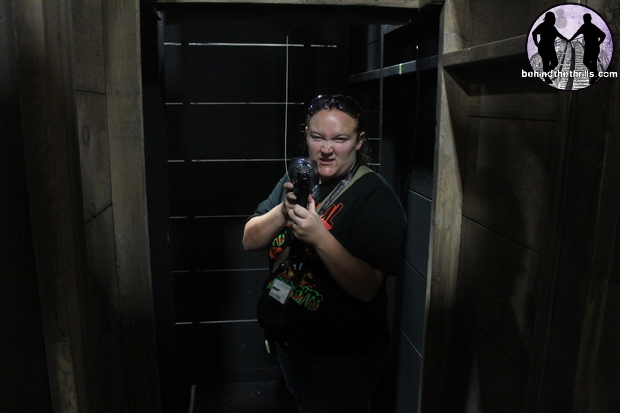 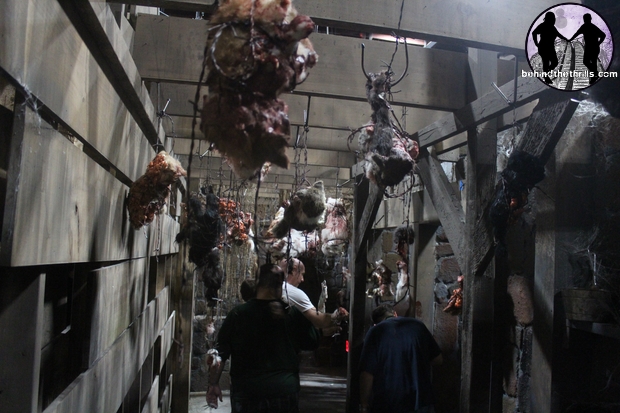 One scene gives an actress a microphone from underneath the set. The actor is actually underneath you shouting with a voice distorter to give that demonic sound. An actual nail gun that shoots air is used to simulate a scene in which a deadite is trying to kill the others. Fake cats, mostly toy stuffed animals hang from one room to simulate the nasty dead cats in the cellar. There is even the smell of rotting flesh to make your stomach turn. But don’t worry, no real cats were harmed. 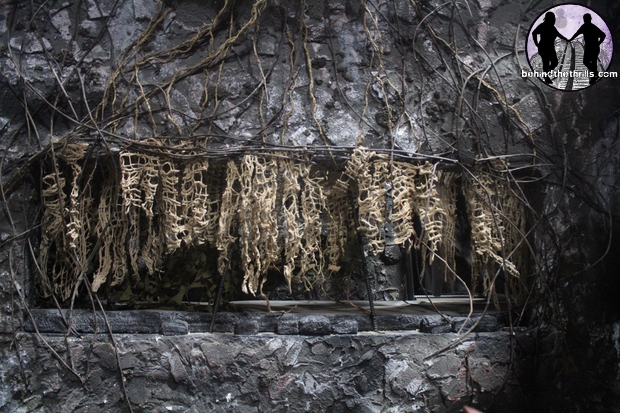 The story gets so in depth that you go underground where an actor has a mock bag over their head, to simulate being buried alive. 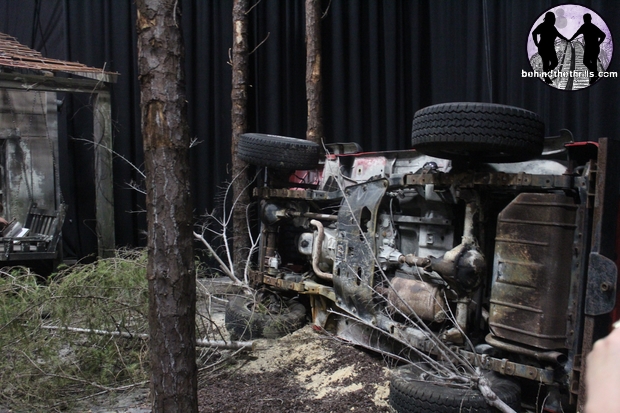 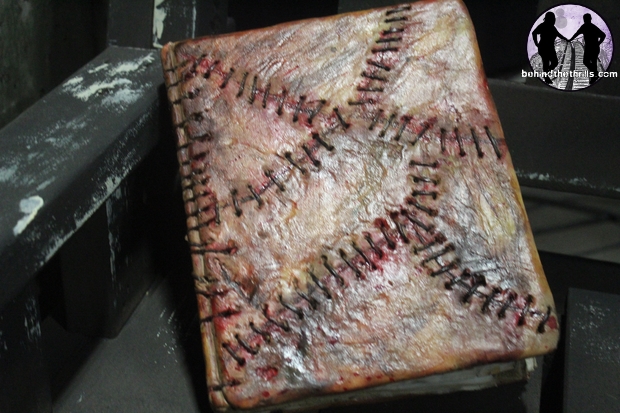 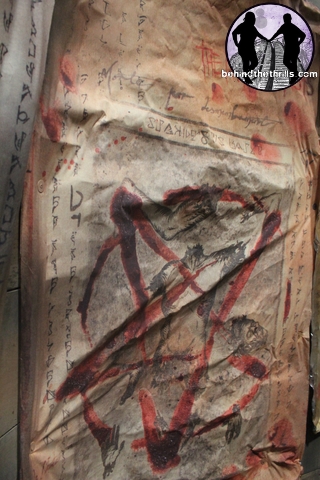 The final scene in Evil Dead is one of the most elaborate that has been in any haunted house. The reason? IT RAINS BLOOD! Sprinklers and misters have been set up to create a very realistic, yet not completely drenching scene where it actually rains blood. You will get wet in this scene, and you will see the final demon pretty much as she is in the movie. Naked. Not really naked, but using a nude form fitting body suit that gives the impression that this monster just rose from the grave to bring darkness to the earth.

Other things that you’ll see is, a raven. In fact there is a raven in every single house this year, though no one exactly knows why. There’s also an overturned car and we see the book of the dead, bound in flesh, on the front porch. Once we leave the burning cabin you walk out once again through the pages of the book. One more little tidbit, this is literally the bloodiest house that HHN has ever done, using almost 15 gallons of blood. All the other houses use an average of 7 gallons. The film itself used 90,000 gallons of blood, with 70,000 of those being used in the final scene..going for the bloodiest movie of all time….until the next one.

See more of The Evil Dead in our slideshow below!

Having trouble viewing the slideshow above? View all the picture goodness here!

Now that you’ve seen the power of the book of the dead with the lights on, see The Evil Dead as it was meant to be seen…in the dark!