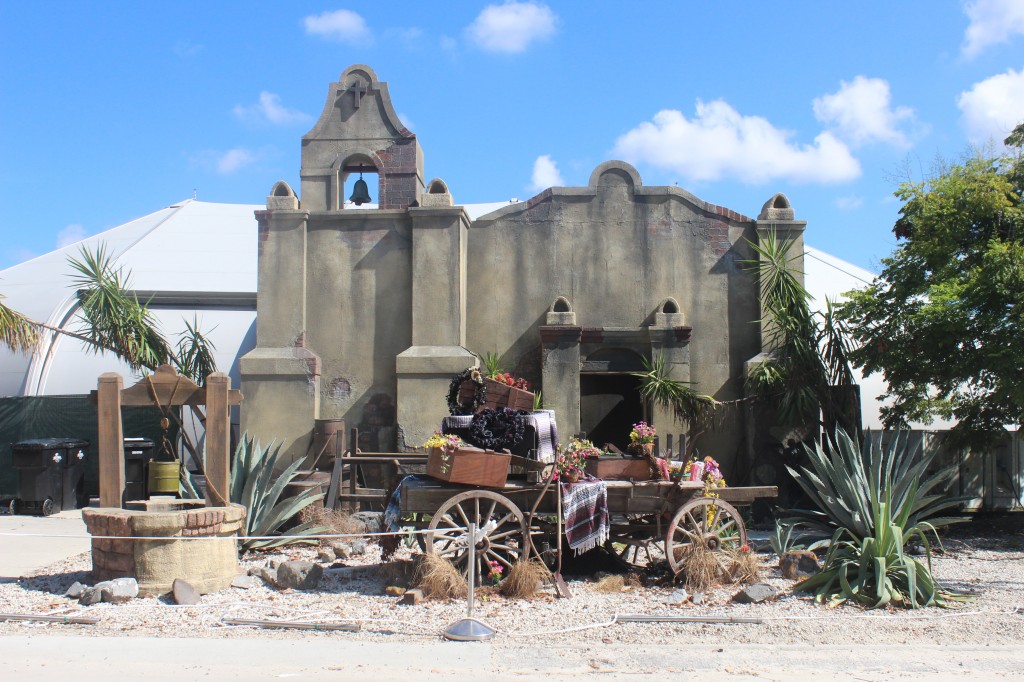 The Mexican Urban Legend of La Llorona is one that is really a warning about greed and responsibility. Long ago, Maria, a single mother of three, was in love with a rich man who didn’t like children. So, Maria drowned her children so that the man would want to be with her. When she told him what she did, he was disgusted and turned her away. Distraught at doing so much and still without the one she wanted, she drowned herself. When she got to the gates of heaven, St. Peter asked where her children. She had drowned them, and they had already gone into heaven…yet she didn’t know that. Telling St. Peter that she didn’t know, he cast her out and told her to not come back until she finds them. Doomed to an eternity of looking for her children, she began taking other people’s children and drowning them so that she could finally enter the afterlife. She is the ghost that cries for her misfortune, and she is the taker of children. 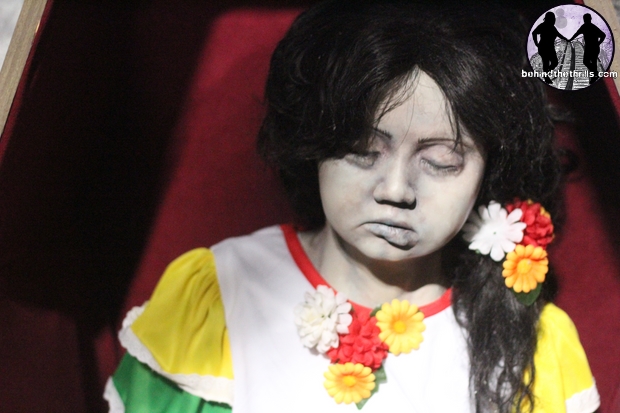 La Llorona (pronounced La Ya Row Na) started life as a haunted maze in Hollywood at Halloween Horror Nights. The maze was so popular with locals that it spawned a sequel. The creative team in Orlando took the Mexican legend and put their own spin on it, calling it an “Urban Legend”.  In fact, La Llorona is the first in the hopeful Urban Legend franchise of haunted mazes at Universal Orlando. The team made the facade of the house a church in a Mexican village. As guests walk in they are hit with the smell of incense burning, and the crying of women at a funeral. There are three dead children, who look as if they were drowned. The house is very bold in the fact that it takes guests right through a child’s funeral..one of the darkest subjects that HHN has tackled to date. 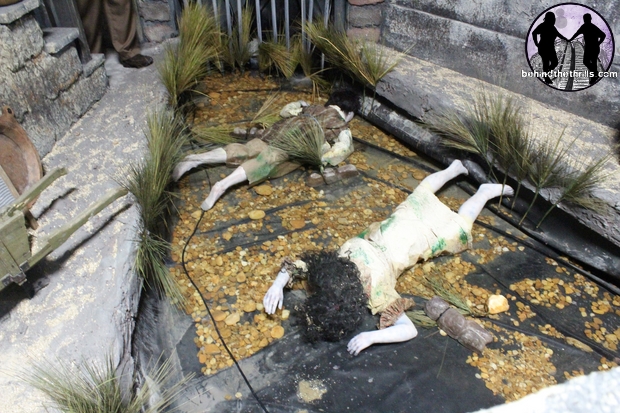 The house is one of the most beautiful that HHN has ever built, despite the fact that it’s one of the most sinister and darkest. The team built an entire Mexican Village, complete with a running stream. The stream is drained every night and cleaned. The area is worked for quite a few scares, with stairs and doors that allow access to multiple scares. The village is also where you will find the raven. Every house this year has a raven perched somewhere in the house, for some inexplicable reason. 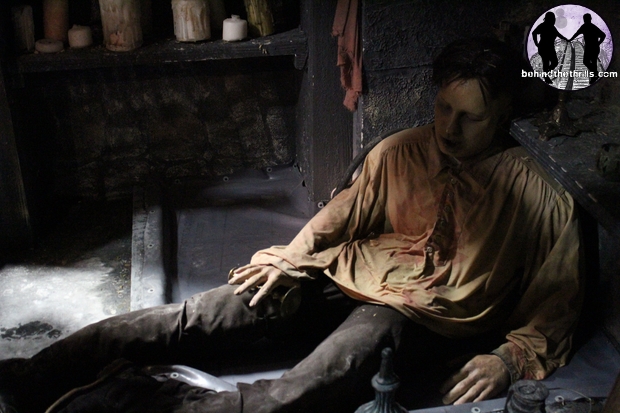 Most of the victims in the house have met an untimely demise by drowning, even though there’s no water around. This young man was trying to break in through the wine cellar into La Llorona’s crypt to find his lost children. 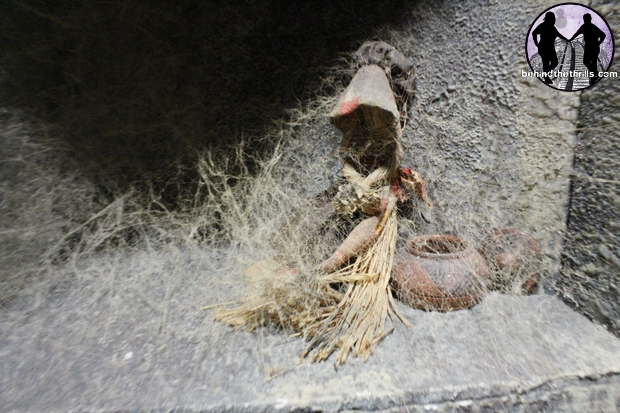 Special material keeps the spider webs, and cob webs looking real, without disintegrating away with time and the millions of people that want to touch it. All of La Llorona’s crypt features little skeletons, to represent all of the children that she has brought to an untimely demise. 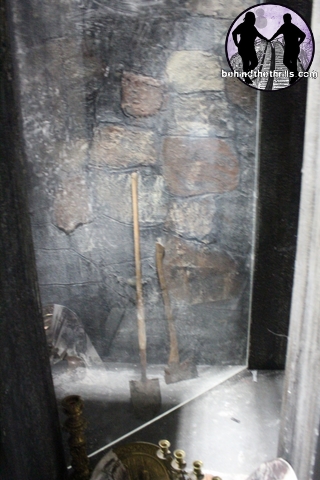 A very old technique with a new spin called Pepper’s Ghost is used to create the watery images of La Llorona in the house. The team uses projection on glass to create a ghostly apparition, only to have a real life actor in your face as you turn the corner. It’s a rather effective technique. 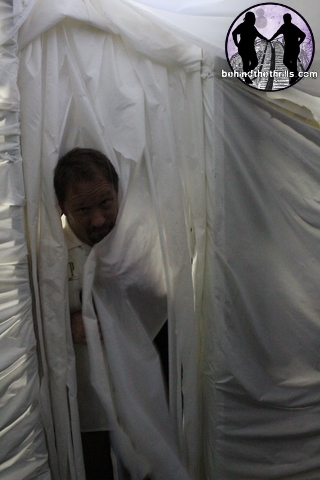 The biggest difference between the California Version and the Orlando version of La Llorona is that the Hollywood version ends with La Llorona taking the children away. With the Orlando version, they change it up completely. Guests are taken to an underwater realm where we see La Llorona deteriorate from the person she was, to the beast that she’s become. The portal is done by using fog, strobes and billowing sheets that actors pop in and out of. 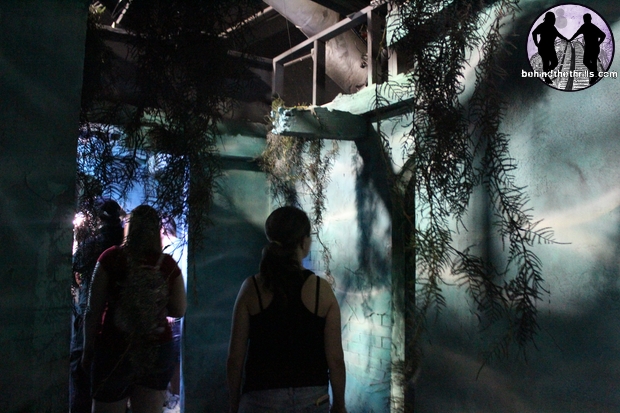 Once in the realm, you have to try and escape a watery grave as you are confronted with the ever changing face of La Llorona. Her face changes and you end up seeing the beastly monster that she is. It’s the same face that children face once they follow her into their graves.

Want more from the weeping woman? Check out tons more pictures in our slideshow below!

Having trouble viewing the slideshow above? Check out all the picture goodness by clicking here!
Now that you’ve seen the human realm, go into the darkness…and we do mean darkness..of La Llorona with this full POV walkthrough!