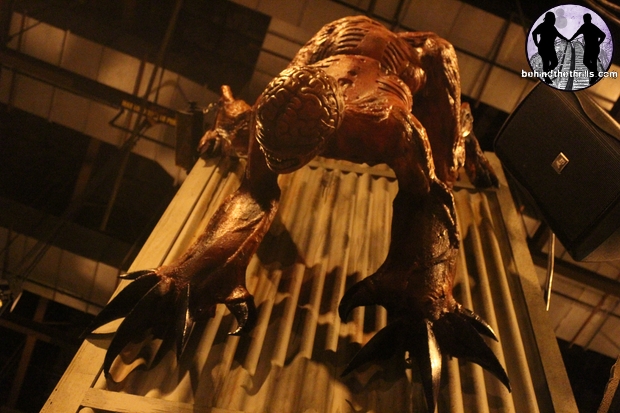 Resident Evil Escape from Raccoon City is based on the hit Resident Evil game series. Specifically, games 2 and 3. You follow Leon through the city to try and escape the hordes of zombies that have taken over. The house is full of everything that fans of the game series love, and has tons of great little nods to the game. It’s the first time that Universal Orlando has dedicated a house solely to a video game. They’ve toyed with the idea before last year with Silent Hill, but that was mostly based on the film series. Way in the past they had a house called Nightmare Creatures 2-named after the video game of the same name, but it barely resembled the game at all. Resident Evil changes all that and sticks strictly to the video game series, so fans of the movie series may be disappointed. But fans of the game series…boy do we have a treat for you! 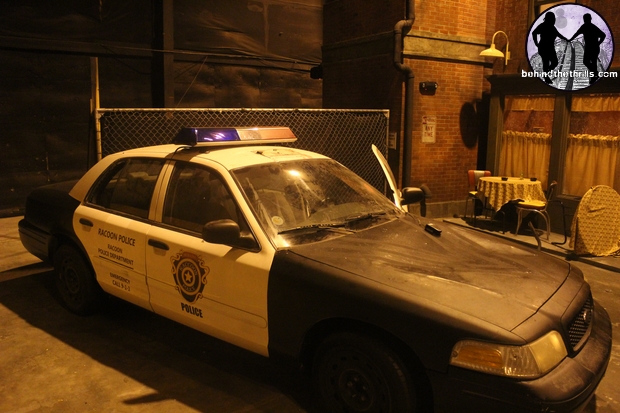 The first thing that guests will see is a full size, fully operational police car. This is where we first meet Leon. He’s busy battling an undead member of the police force. We will see Leon a few times, and hear voices of other characters throughout the house. 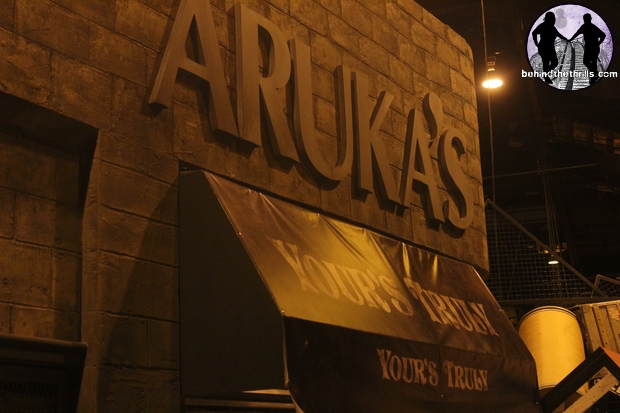 The facade of Raccoon City has some nods to the universe. Arukas is actually Sakura spelled backwards, which means nothing to us. But if you’re a fan, you’re supposed to know exactly what that means. It’s just one of the many little hidden gems that huge game fans will notice. 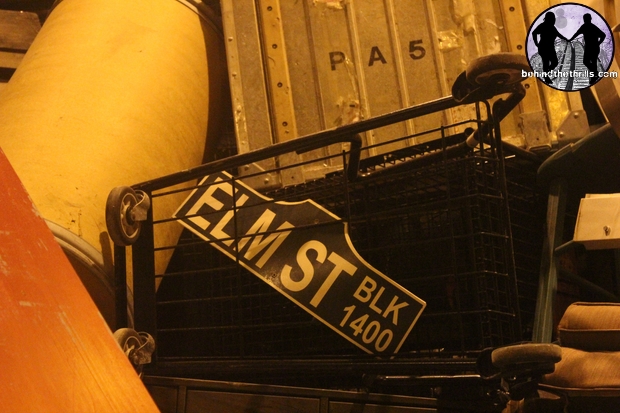 HHN fans have other stuff to look for, like this sign from a certain house on a certain street. Nightmare on Elm Street was a house at HHN in 2007, and what better way to pay tribute to the nightmare situation of a zombie invasion than with a tribute to the mother of all nightmare movies. 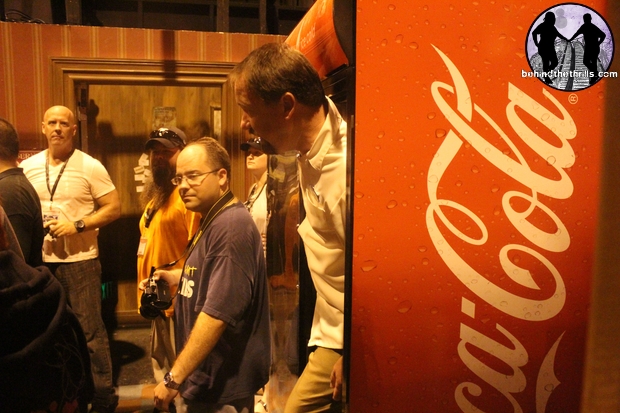 The next stop is Tony’s Pizzeria. Several things are going on when you walk in, the first is that Tony is having himself a snack. He has a corpse pinned down taking a bite out of it, which squirts blood on passersby. It’s done by using a water jet tucked under the spine which squirts when lifted. The other big scare comes as you’re looking at pizza boy. Coke girl jumps out of the cooler to scare the collective hell out of you. 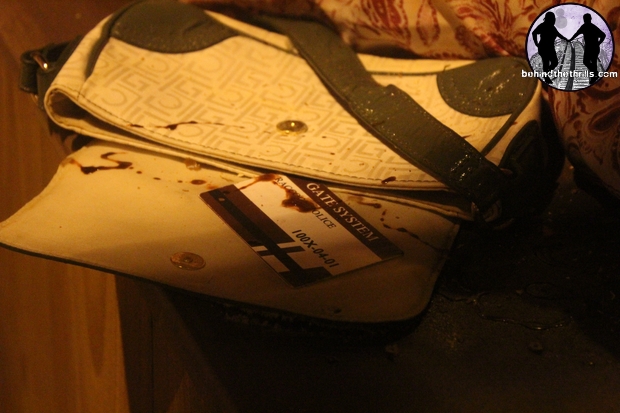 For gamers, you know that to get ahead to the next level you’ll need an access card. Lucky for you it’s sitting right on the counter, as it’s former owner is getting chomped on. 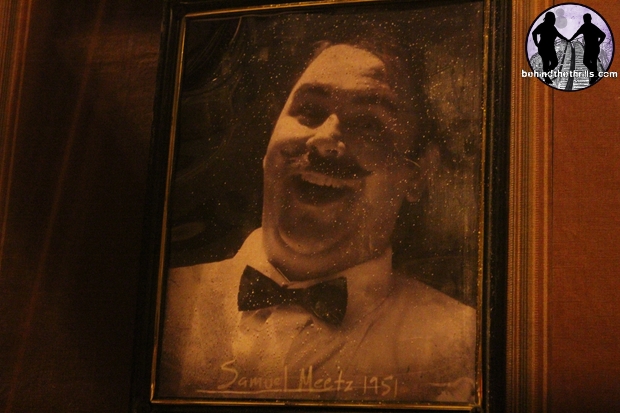 For HHN fans, it looks like Tony was either related or was a huge fan of Samuel Meetz, the purveyor of Meetz Meats and the scurge of Carey Ohio. Samuel Meetz is actually creative team member Mike Aiello, looking proud and pudgy as the shop owner of the 2009 house Leave it to Cleaver. 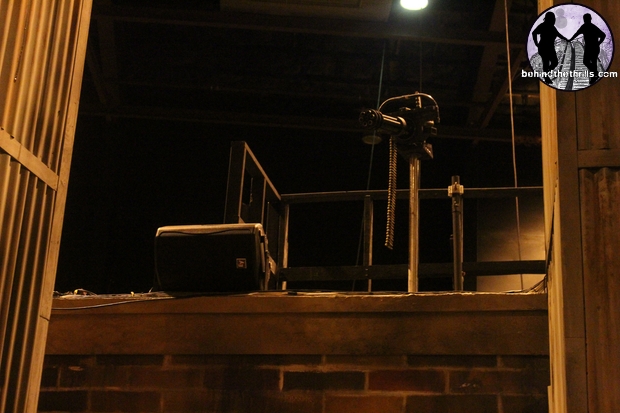 The biggest baddie of them all, Nemesis will be here perched upon his Gatling Gun, trying to mow you down as you try to make it through the game. He actually is part of a distraction scare, which has you looking at him in awe and amazement, when something else is looking to get you from below. 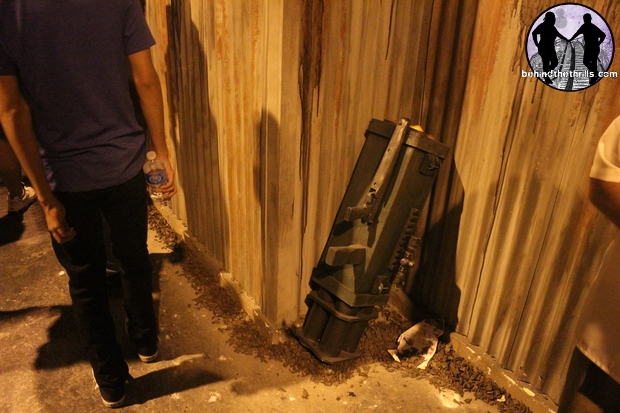 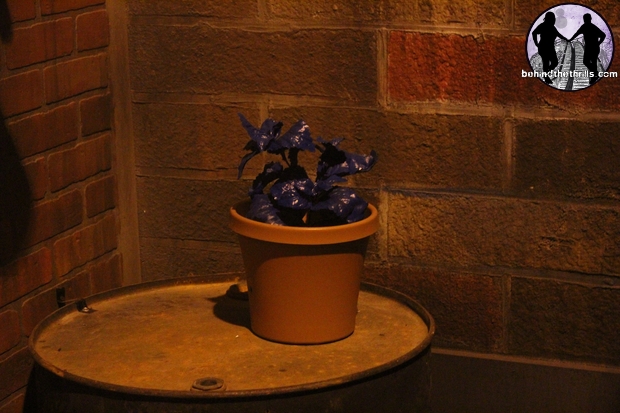 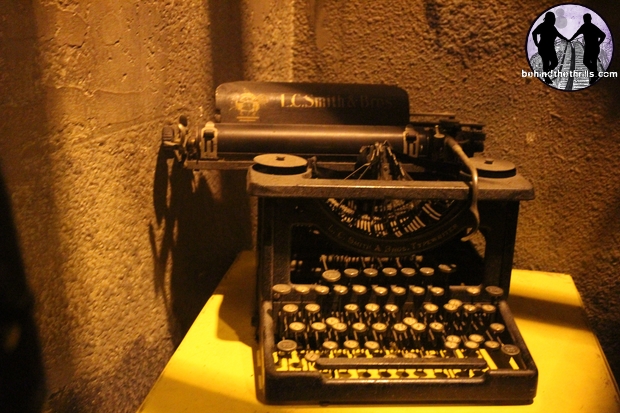 Items play an important part in the Resident Evil franchise. What seems like everyday objects to you have huge meaning, and they are all here. Whether it’s a blue plant that heals poison, a rocket launcher that helps you get past Nemesis, or a typewriter that let’s you save your progress, it’s all here. How many can you spot as you walk through? 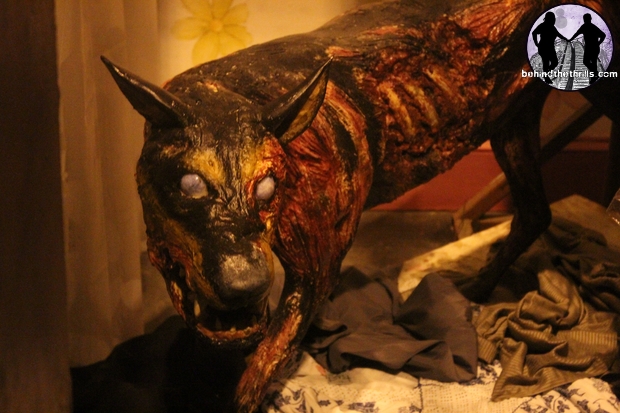 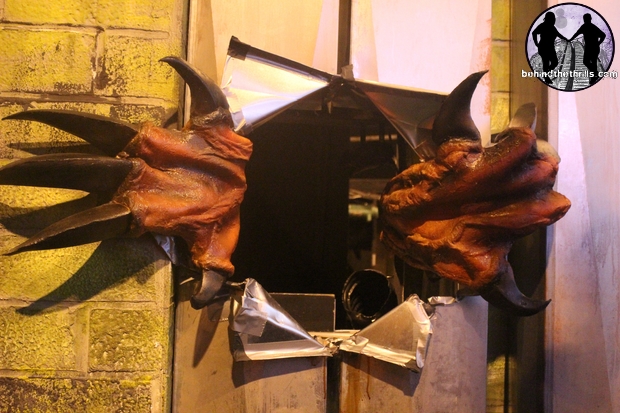 While we’re talking important items from the game, let’s talk creatures. They’re all here to destroy you as you try to survive. Of course you have Nemesis, but you also have lickers and the zombie dogs. You also get a glimpse of Cerebrus (same but different!) as you walk along the path. 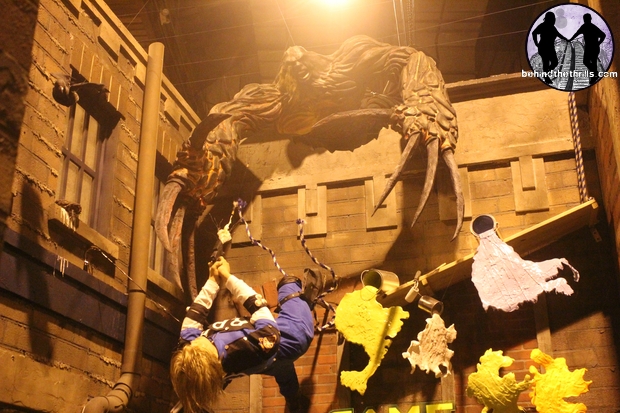 As in any video game, you sometimes have to take a break from the action. In this room you hit the pause button and see all the characters in paused mode. You can even see a raven in the room somewhere, in pause as it’s getting the crap scared out of it. For some reason, every house at HHN has a raven hidden somewhere in it. 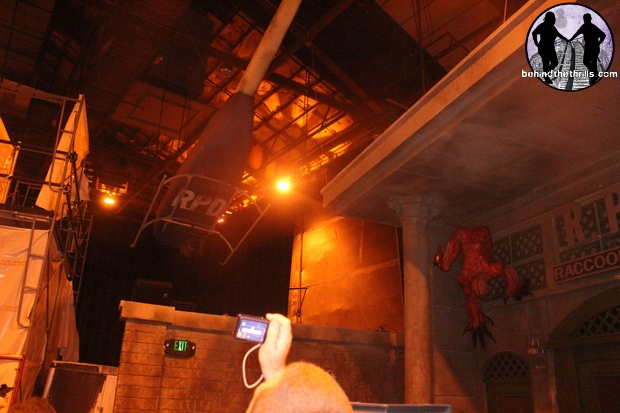 The final scene of the house features a huge helicopter that’s come to rescue you. It’s a piece of a real helicopter and it’s hovering around the Raccoon City Police Department as Lickers invade. You get one final assault here by all manners of zombies, and even Nemesis. After all that, how do you think you fared? Did you make it through the game alive? 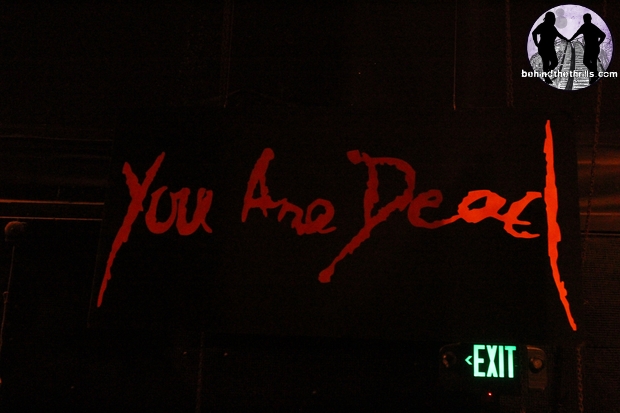 Nope, you failed and you are dead. Better get in line and try again. In fact, this is the only downside to the house, no one lives, no one survives. You all die!

Escape from Raccoon City with even more pictures from inside Resident Evil! Having trouble viewing the slideshow above? Check out all the picture goodness by clicking here! Now that you’ve seen all the cheat codes, play the game and try to survive in our full POV walkthrough video! http://www.youtube.com/watch?v=O322Y7UeAnc The Unmasking the Horror Tour runs only on event days. Each tour includes three houses, and there are two tours daily, one in the morning and one in the afternoon. Each tour runs $79 dollars for one tour, or $99 for both tours and last approximately two hours. For more information on Unmasking the Horror visit the official website by clicking here! Be sure to follow along with us for more tours and HHN goodness! Follow us on Twitter @BehindThrills for the latest updates! Want more Unmasking The Horror Tours? Click here to see all six houses on this year’s tour!   For more information about Halloween Horror Nights, including tickets, visit the official website by clicking here! Need to get tickets? Click the banner below to get your tickets today!