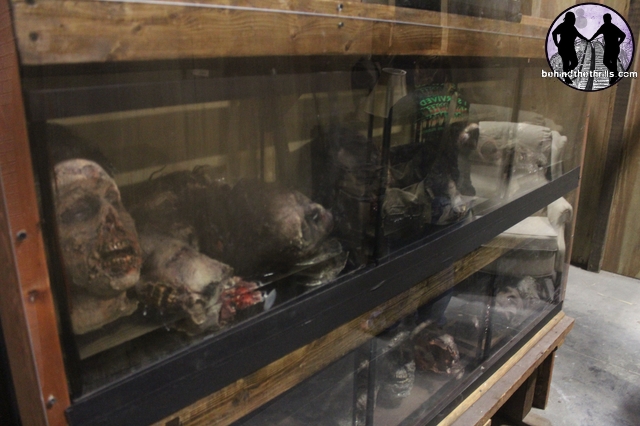 If you’ve been living under a rock…or are just tired of zombies…The Walking Dead follows the lives of people after a zombie apocalypse. What happens when the world falls apart, and the only thing left are the remnants of the world you used to know? That’s the premise of the show that pits people against Walkers (as the zombies are called) and person against person. Sometimes the biggest threat to your existence is someone who shares the same enemy. 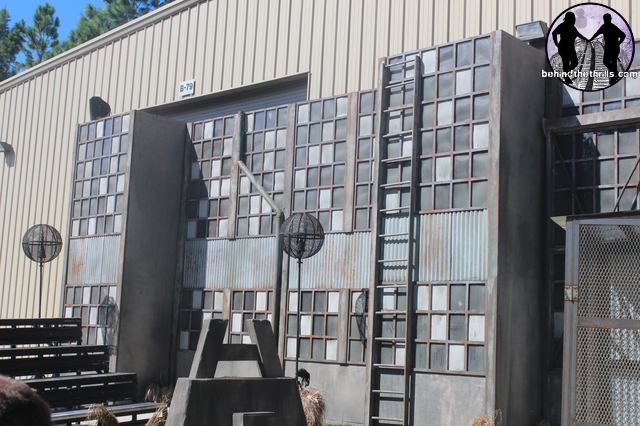 The Walking Dead:No Safe Havens takes place in the third season of the show, and starts you out in the town of Woodbury. Woodbury is an idealistic town that has rebuilt under the leadership of the “Governor”. The Governor has some dark secrets and isn’t the man he let’s on to be. The town also isn’t what it seems as they pit Walker against humans in death matches for entertainment. The first scene is one of the most elaborate scenes that HHN has built to date, because it uses not only something recognizable from the show, but it also gets the scares started before you even enter the house with two Walkers chained up outside. 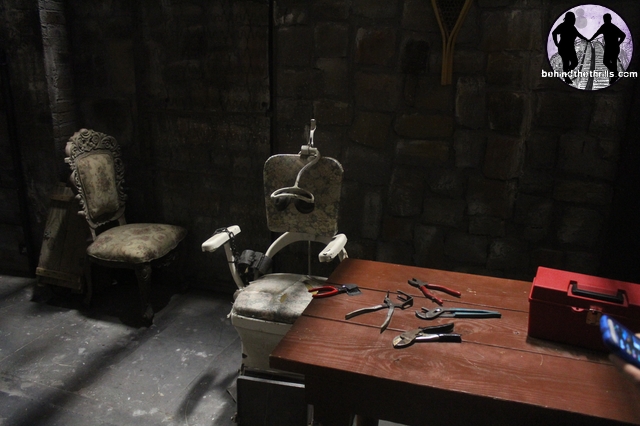 While the show features tons of interesting characters, they aren’t here. However, the show also isn’t afraid to kill off those characters and make the Walkers. If you’re looking for familiar characters, you’ll find them in their undead state. The first major scene inside the house gives us a look at the torture room that the Governor would take some of his vicitms into, including his friend Milton. 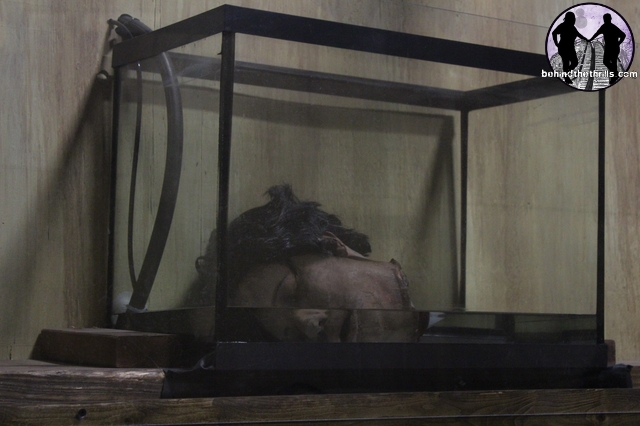 One of the coolest aspects of Season 3, was the Governors collections of heads. They were biters that were particular threats or people that turned. He kept their head as a souvenir, and kept them in aquariums where they would bite and groan at the people outside the tanks. The scene is replicated perfectly, with fake heads floating. The head at the top is modeled after Mike Aiello from the creative team. Also every night the head tanks are drained to keep the heads from deteriorating. They are also held in place with thin pieces of fishing line to keep them straight. We also see Penny in this scene, the governors daughter, who has a bag placed over her head when she misbehaves. 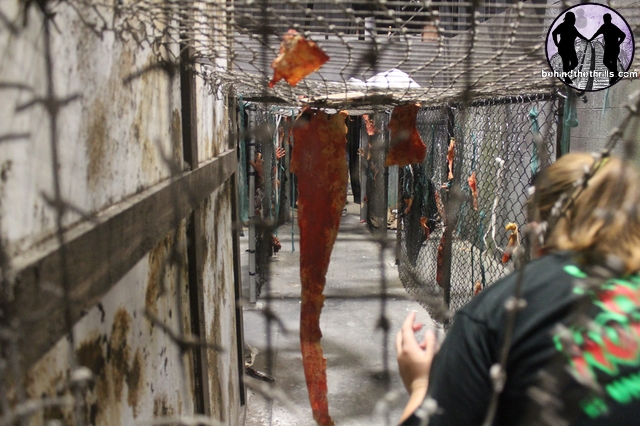 One fun feature in the house is the tunnel that you must go through. They make these tunnels so that you aren’t really paying attention to the Walkers beside you, which makes for some great scares. Of course there is a way around the tunnel, but it’s not nearly as fun as actually taking the tunnel head on. 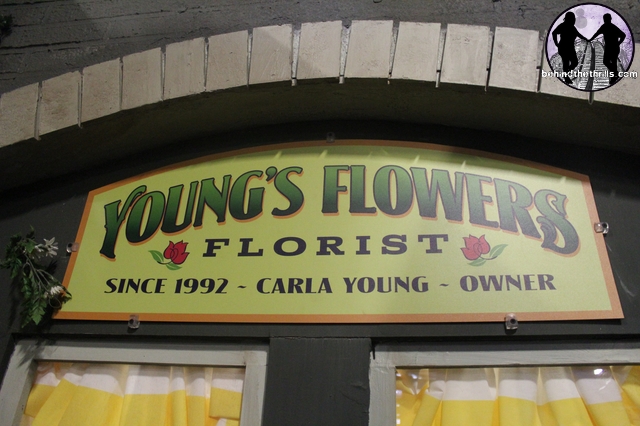 Some of the things that Universal creative likes to do is throw in little nods to the creative team or employees. One such thing that they’ve done this year isn’t to a member of creative, but to someone who lost their battle with cancer. Carla Young was a scareactor for many years, and a member of the Universal team. She has a nice little tribute in Woodbury with a flower shop. From the streets of Woodbury to the walls of the prison, you are transported through the Walker infested walkways to the safe haven of the prison. Only…it’s not so safe anymore. Tons of walkers are on this path, behind fences and against walls. This is one of the most elaborate sets built and is absolutely huge. This is also the set that you will find a raven on. For some inexplicable reason, there is a raven hidden in every single house this year. 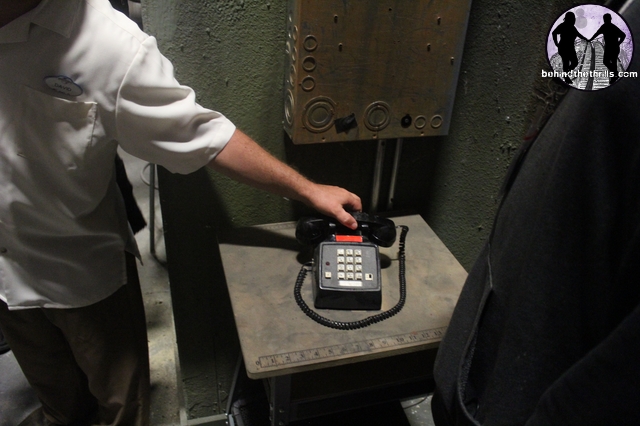 When you go through the prison, you’ll hear a ringing phone and hear a baby. It’s a nod to one of the episodes in which Rick’s wife Lori gives birth to a girl, but in doing so, loses her life. It’s also a time when Rick goes crazy. If you pick up the phone (which only lifts half way up) it activates a trigger that allows you to hear what’s going on inside Rick’s head. 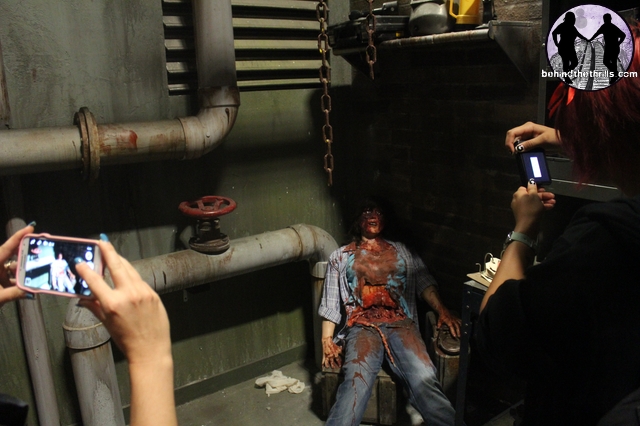 If you give a quick look to the right, you’ll see what’s left of Lori after she gives birth, and Carl performs an emergency C-Section. It’s a quick nod, and a hidden detail that’s easily missed. 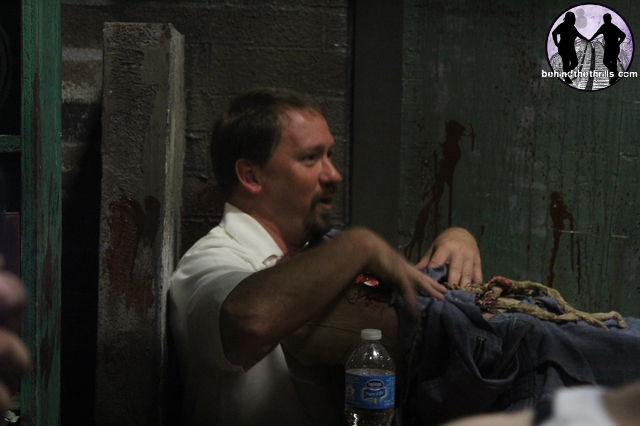 Another key scare is the prisoner being munched on by a Walker. The effect is rather simple, it’s the bottom half of a torso, while an actor pops up through a hole. It gives the illusion that the prisoner is really being eaten alive. 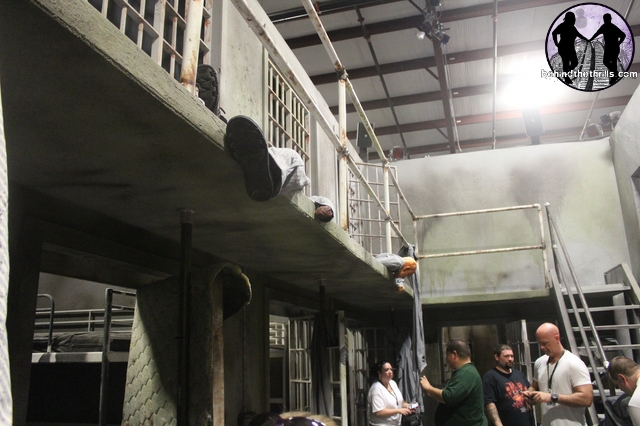 The final scene is a huge assault of Walkers in the prison. They have gotten out of their cell area and are running amok. Each cell contains a bunk bed and some even toilets. they are real in every aspect. There are as many as five Walkers in the area at once, and they can either be right out in the open or hide in the cells. The final prison scene is a huge mock up of the actual set, and is the largest built at HHN.

Want more Walking Dead hijinks? Take a look at our slideshow below for even more pictures!

Having trouble viewing the slideshow? Click here to see all of the picture goodness!
Now that you’ve seen No Safe Haven with the lights on, get a look at the house infested with Walkers and in full dark.