SeaWorld Orlando is kicking off 2014 with a line up full of hot music, hotter BBQ and cool brew. A huge line up of free concerts, tasty BBQ and loads of SeaWorld fun is on taps for 2014. Bands, Brew &BBQ is but one of the many festivities coming to SeaWorld Orlando in 2014, plus the park has revealed an all new Fun Card giving you not only the fun of the many different festivals in 2014, but also the rest of 2013 as well! 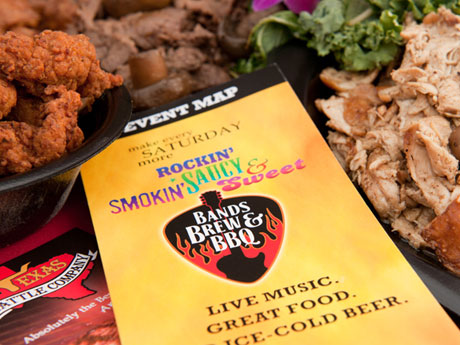 Saturdays and Sundays in February, SeaWorld Orlando servers up some of the best BBQ, the biggest bands and best beers in it’s annual tribute to good times-Bands, Brew & BBQ. The event features mouth watering BBQ from SeaWorld, as well as other Orlando area vendors, a huge musical line up and dozens of different beer varieties on tap.

Concerts are free with park admission, though seating is limited. The park will offer VIP seating as the event gets closer.

Bands Brew is just one of the many different festivities happening at SeaWorld Orlando in 2014. The park will get guests closer to the animals than ever before, and let them learn some great fun facts during Wild Days, the little ones can dance and have fun with Just For Kids, and SeaWorld let’s the Latin flavor burn with Viva La Musica.

NEW! Wild Days – Weekends January 11 through January 26, 2014.Connect even deeper to animals and the wonderful world we share during Wild Days, an all-new event at SeaWorld® this January. Families can enjoy three weekends of interactive shows and up-close animal encounters. You’ll meet the leaders in the world of animal rescue and rehabilitation, celebrate penguins and immerse yourself in what you love about SeaWorld® – our animals!
January 11-12 – Jack Hanna Weekend
January 18-19 – Sea Rescue Weekend
January 25-26 – Penguin Lovers’ Weekend with Julie Scardina
Just For Kids! – Saturdays from March 22 through April 12, 2014
Bring your little ones to sing, dance and play the day away at SeaWorld’s Just for Kids festival. Experience live shows featuring the hottest kid-friendly favorite entertainment, try out our kid-sized rides, and meet adorable animals. Soak up all the fun, music, treats and more. It’s a festival that’s Just for Kids, and only at SeaWorld.
Viva la Musica® – Saturdays from April 26 through May 17, 2014
Celebrate the food, fun, sights and sounds of Latin culture at this annual Hispanic festival for the entire family, featuring live concerts by internationally renowned Latin musical artists and savory Latin cuisine prepared by SeaWorld Orlando’s own Executive Chef, Héctor Colón.

Guests can experience all the fun with a SeaWorld 2014 Fun Card. For just a little more than a regular day’s admission, guests can experience SeaWorld all year long from now, until December 31st 2014. It’s a good time to celebrate with SeaWorld as they gear up for their 50th anniversary. Beginning March 21st, the park will have daily celebrations and will unveil tons of new fun ways to connect with the world around you, and experience the sea like never before.
Stay tuned for more updates, and be sure to follow along with us on Twitter @BehindThrills for the latest.
For more information about SeaWorld Orlando, visit the official website by clicking here!
TAGBands Brew & BBQ at SWO Sea of surprises SeaWorld Orlando
Previous PostMacy's, the Grinch and Mannheim Steamroller to bring Christmas cheer to Universal Orlando beginning December 7th! Next PostBusch Gardens Tampa to change the heart of the park with Pantopia and Falcon's Fury