Universal has started to slowly announce details of what will be coming in 2014 along with The Wizarding World of Harry Potter – Diagon Alley. Universal Orlando announced that they would be building another Wizarding World of Harry Potter area within their Universal Studios area and that it will open in 2014. A couple of weeks ago, Universal Orlando announced that they would have a Hogwarts Express attraction, which would turn the attraction into a multi-park experience. 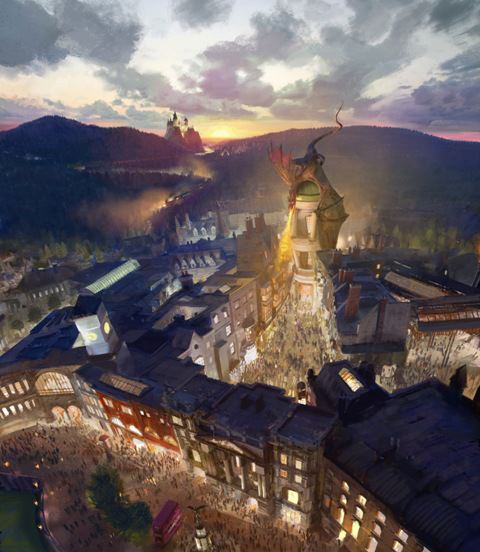 More information about what will be within Diagon Alley was announced today while Mike West was speaking at the World Travel Market, according to Travel Daily Media. A Leaky Cauldron restaurant along with a Gringotts themed roller coaster will be incorporated into The Wizarding World of Harry Potter – Diagon Alley.

Pictured above is the concept art that Universal Orlando released when they initially announced The Wizarding World of Harry Potter – Diagon Alley shows that there will be much more than just a roller coaster, the Hogwarts Express, and a restaurant coming in 2014. Universal Orlando has yet to announce further details on what else is coming, so stay tuned as we learn more details.