Halloween has just ended, but Universal Orlando is already making huge preparations for the busy Christmas season, and more importantly, the year ahead as Harry Potter gets ready to stretch his reign from one park to another. Preparations are underway to bring new choices to CityWalk as well as more entertainment to Islands of Adventure, as construction continues on the latest expansion of The Wizarding World of Harry Potter at Universal Studios Florida. Christmas is also making an appearance, and transforming the parks as they get ready to kick off the Holidays with Grinchmas and the Macys Day Parade. 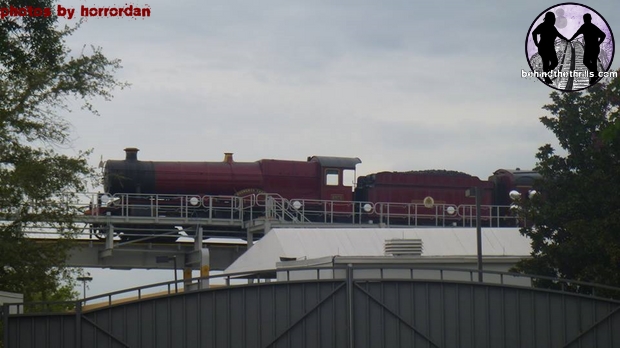 One of the biggest surprises happening around the park is the spotting of the Hogwarts Express. The train will be used to transport guests from Universal Studios Florida to Islands of Adventure and back. The train will not only be a transportation system, but we are also told that it will be an all new experience that takes guests through the English Countryside and to Hogsmeade station, battling dementors and dark wizards along the way. The train has been making test runs around the park, and has been spotted several times in various areas, chugging along slowly. 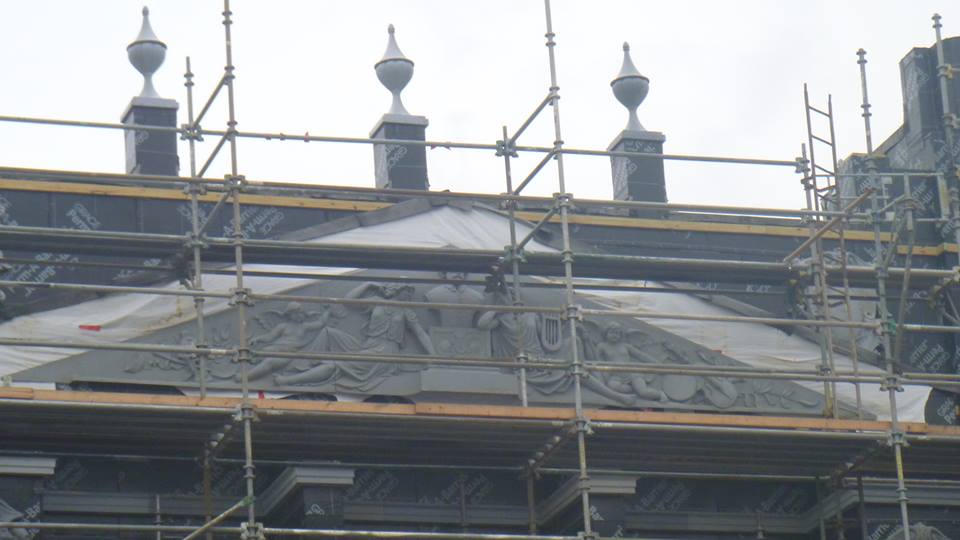 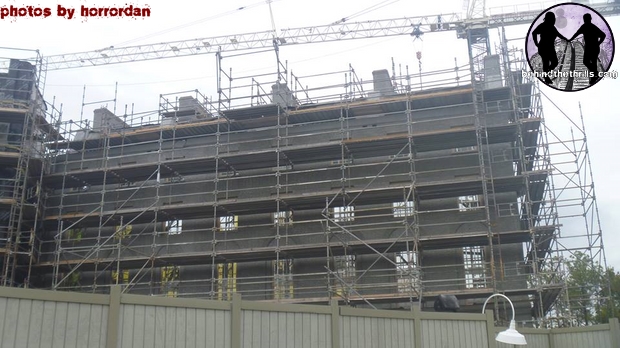 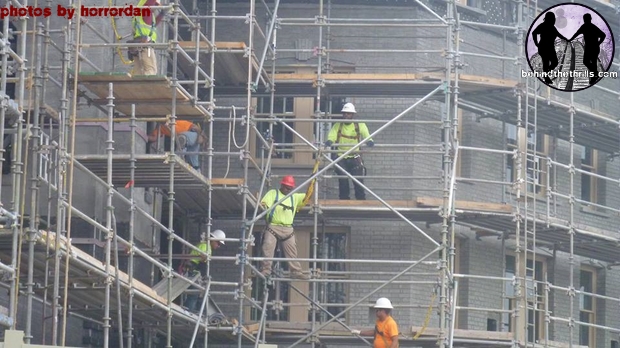 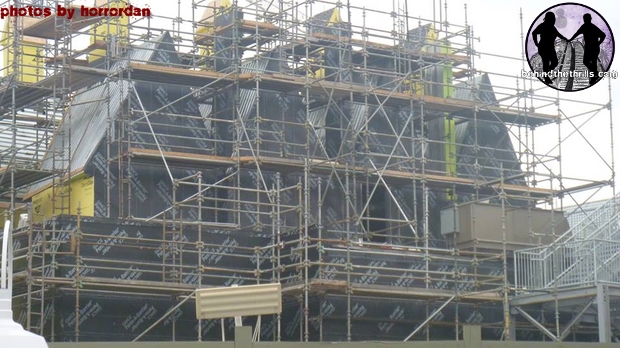 Work at Diagon Alley continues to move along. While the outside structures have been visible for quite some time, they are now starting to really take shape, and resemble the locations from the books and films. Intricate work, like the top picture above, is starting to decorate the buildings, and make the locations come to life. 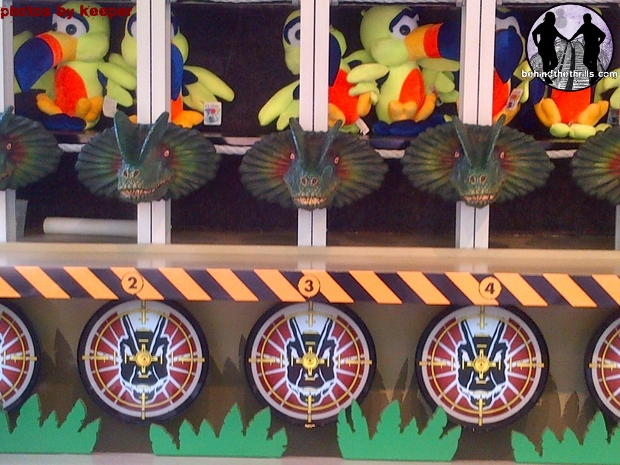 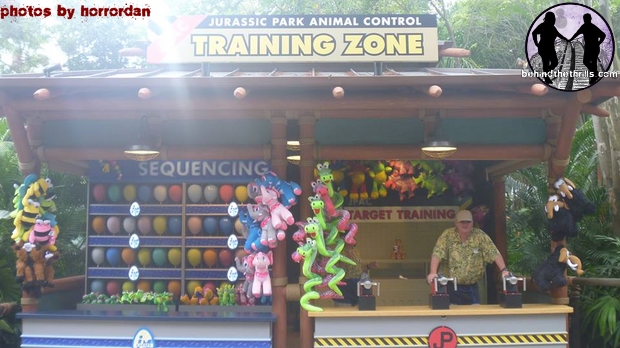 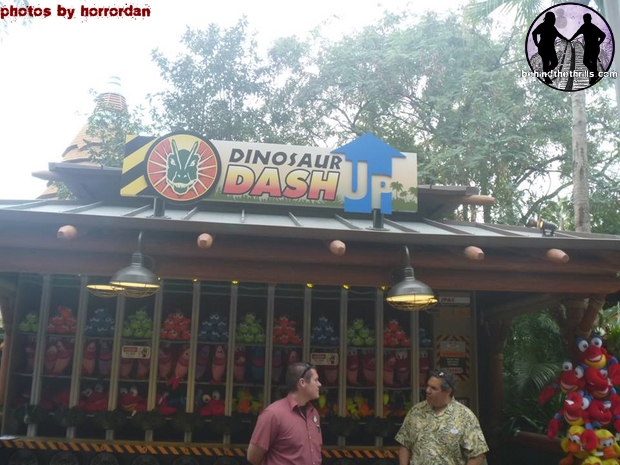 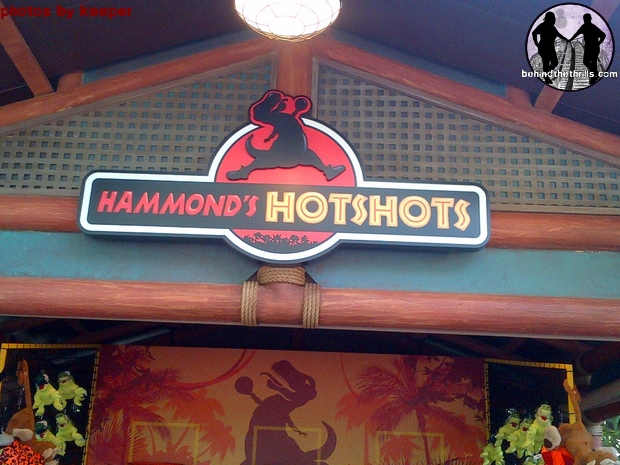 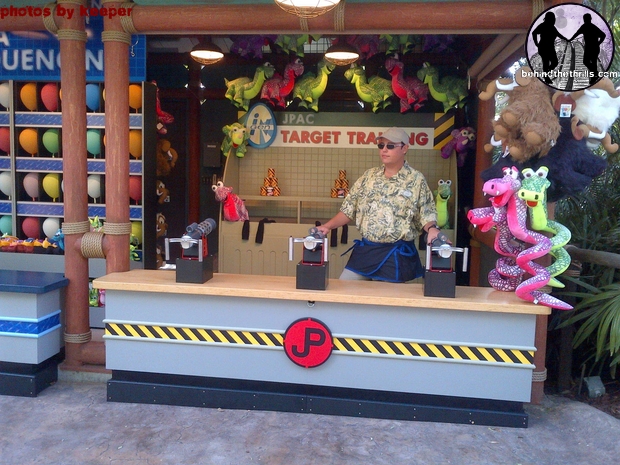 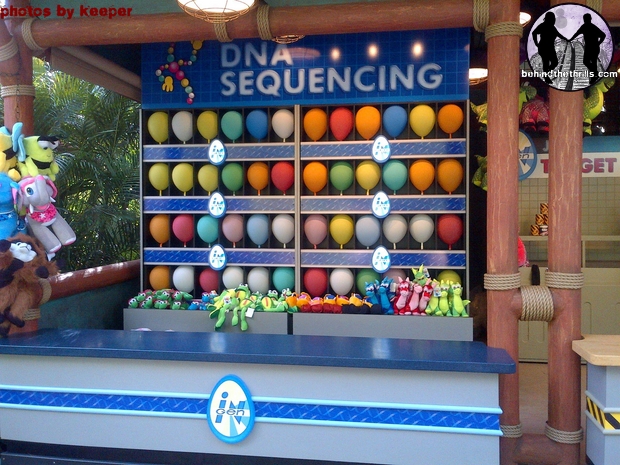 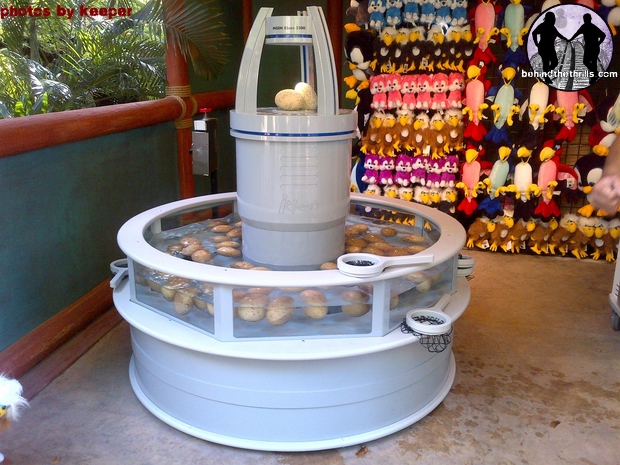 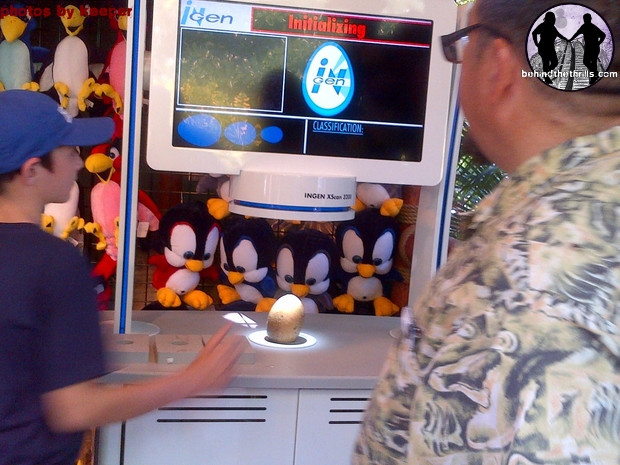 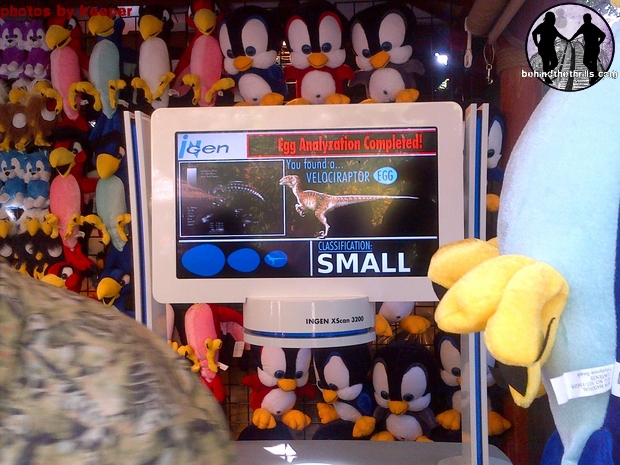 At Islands of Adventure, Jurassic Park has unveiled a new “Training station”. Carnival type games, all brilliantly themed to the film and books, have sprung up over near Jurassic Park River Adventure. While they are all fairly simple, and standard games, the themeing will send squeals to all Jurassic Park fans. The coolest is a variant on the floating ducks game. Guests pick a dinosaur egg from the pool, and scan it. The size of the dinosaur inside dictates the size of the prize you win. It’s a really cool gimmick for an old game. 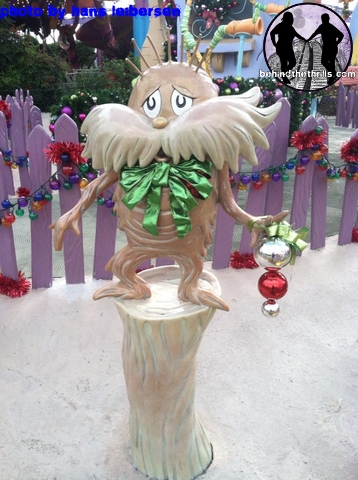 Seuss Landing is gearing up for Christmas, as is the rest of the park. The Lorax has on his Christmas best as the Who’s in Whoville get ready for Grinchmas! Grinchmas has the Who’s of Seuss Landing decorating the entire area, and preparing for the Holiday Whobiliation. The Whobiliation is completed with an appearance from The Green One himself, Mr. Grinch, in a retelling of the holiday classic How The Grinch Stole Christmas. It’s all part of the holidays at Universal Orlando which starts December 7th. 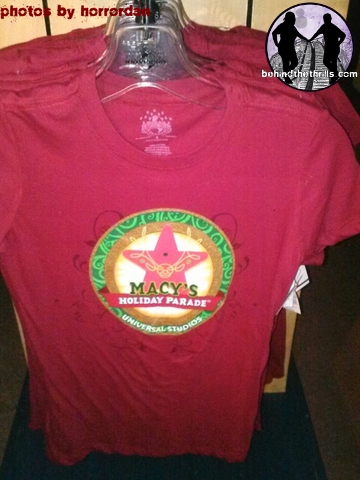 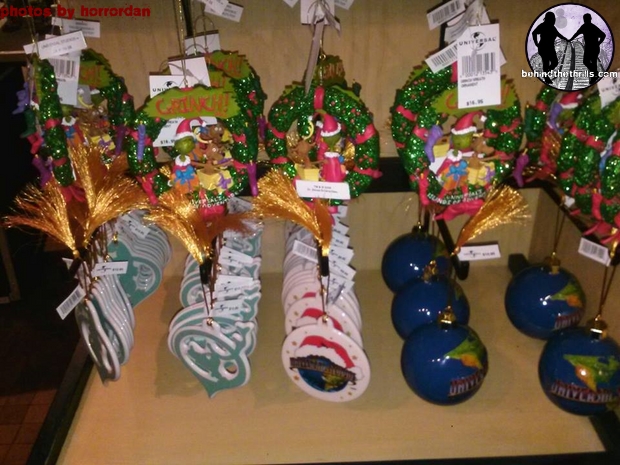 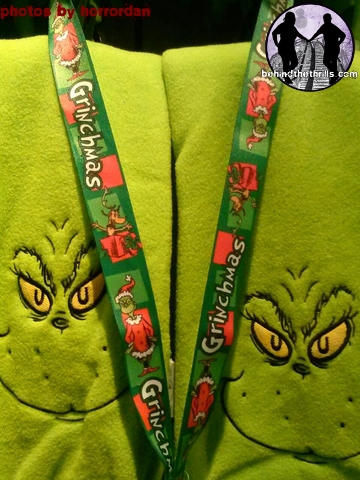 Speaking of the Holidays, this year Universal Orlando has rolled out all new merchandise for the holidays. As far as we know, this is the first time the park has released Macy’s Day Parade merchandise, as well as Grinchmas merchandise. The park has had Grinch themed merchandise, but never Grinchmas specific (at least as far as we can remember). Guests can purchase ornaments and t-shirts with the Macy’s logo, and Grinchmas logo, as well as other festive goodies. 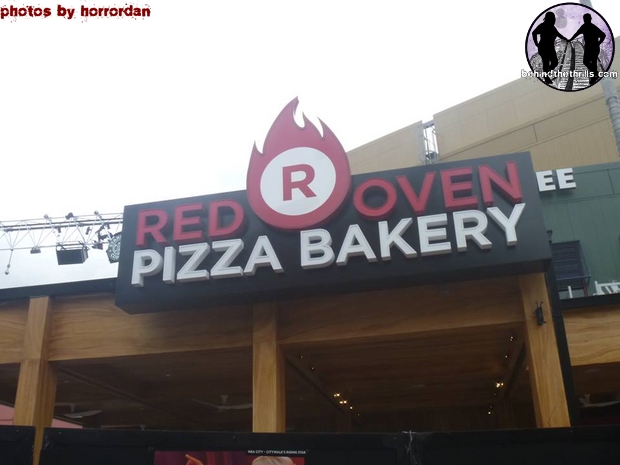 Citywalk is undergoing HUGE changes as the former location of Pastamore’s quick serve restaurant has been closed, gutted and rebuilt as Red Oven Pizza Bakery. The area looks to be nearly complete, but no word on an opening date just yet. If we had to guess, we would say that guests could see the new restaurant open before the busy holiday season. 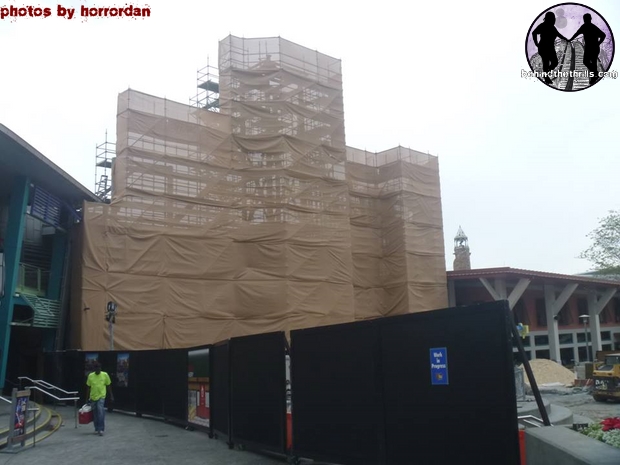 Latin Quarter is also getting a new makeover. From what we’ve been told, this new Spanish restaurant will be themed to Don Quixote, and will feature an all new menu, nightlife and a huge windmill on the top of the restaurant. 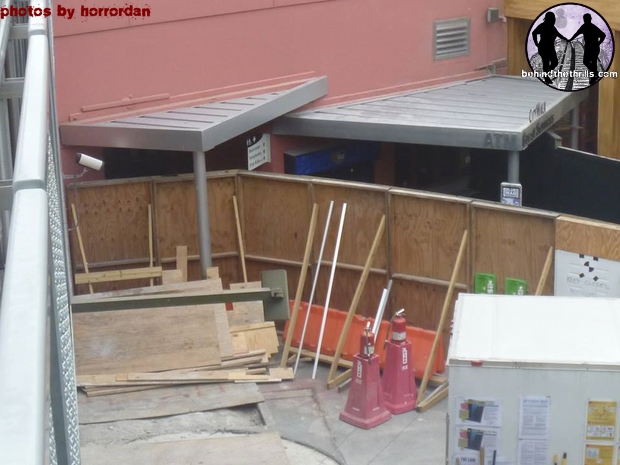 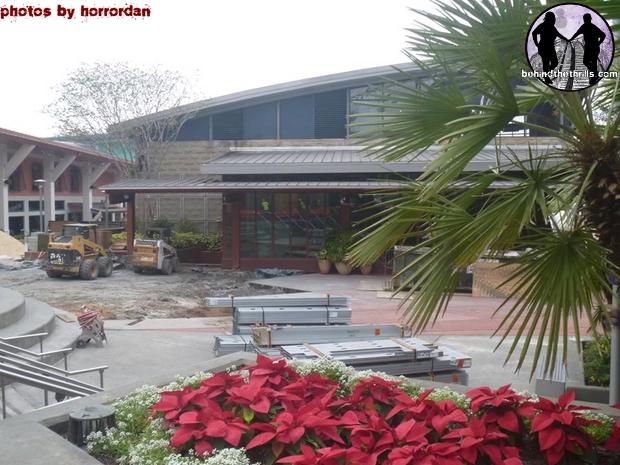 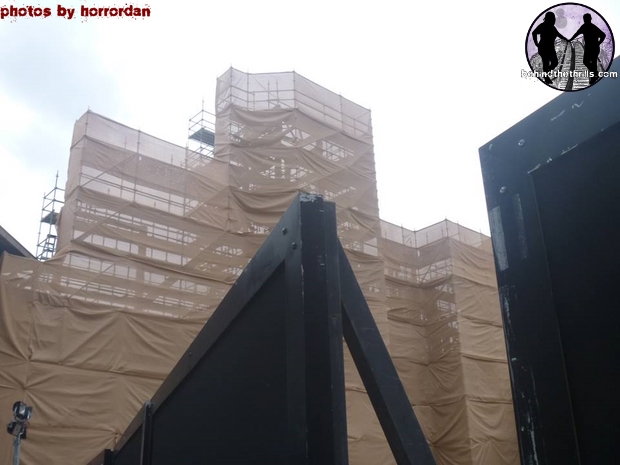 Citywalk seems to be having a huge shift in the way it’s laid out as well. Starbucks is going from being upstairs, to downstairs in the area that was formerly the Endangered Species Store. Cigarz is said to be on the chopping block next, in order to make way for yet another club. With the new changes, it seems that the more adult oriented activities will move upstairs, and the family friendly activities will go downstairs, with the ramp ending at Margaritaville and Emeril’s being a mix of both family friendly and adult oriented activities. It seems like a step in the right direction, as this was one of the biggest complaints that we’ve heard about Citywalk (and the now defunct Pleasure Island) that all the adult and family friendly activities seem to collide.

Check out even more pictures in our gallery below!

There’s so much happening at Universal Orlando in the next year. The revamping of Citywalk is sure to have bring a lot of attention, as will the opening of the all new Cabana Bay Beach Resort in early 2014. Guests hoping to stay onsite at the new hotel can do so at a reduced rate until June 14th. After June 14th, the Wizarding World of Harry Potter:Diagon Alley is expected to officially open. The new area will feature not only the Hogwarts Express, but also an all new area full of rides, shopping and magical experiences.

Be sure to stay tuned for more info as the openings of everything happening at Universal Orlando draws near. Be sure to follow along on Twitter @BehindThrills for the latest!

For more information about all that’s happening at Universal Orlando, including tickets for Christmas, visit the official website by clicking here!