The Orlando Eye complex, formerly known as IWalk and IDrive Live, may have an unstable name, but the project is moving along at a break neck pace. The huge 425 foot Observation Wheel is fast becoming a landmark as cranes work seemingly non stop on the project. It’s just one part, albeit the biggest part, of the huge entertainment complex coming to Orlando’s International Drive later this year. 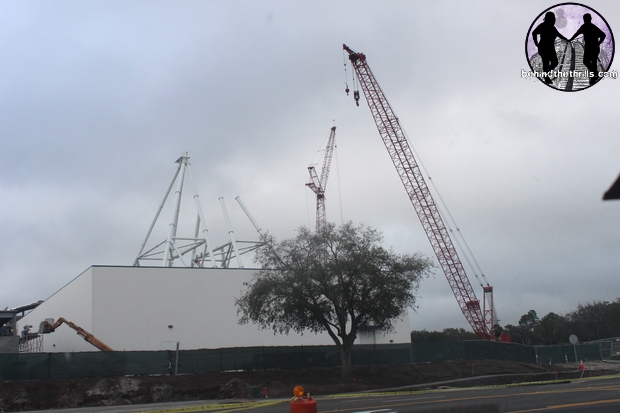 In the span of a month, the Orlando Eye has gone from pieces on the ground to a huge structure towering over the International Drive area. When completed, the observation wheel will be the centerpiece of the all new Orlando Eye Entertainment complex.

Check out our video walk around of the construction area:

The entertainment complex will boast a slew of new restaurants, including many new to the area. The area will also be home to Madame Tussauds Wax Museum, as well as the Sea Life Aquarium. So far the area has several structures done, including the massive parking garage.

Check out more pictures from around Orlando Eye:

The Orlando Eye does not have a set opening date, but it is expected to open later this year. When completed, the entertainment area will have a huge variety of shops, restaurants, attractions and nightlife. On a clear day, you may be able to see as far as the NASA Vehicle Assembly building on the coast, some two hours away.

Stay tuned for more information about The Orlando Eye, and be sure to follow along with us on Twitter @BehindThrills for the latest updates!