It gnaws in the shadows, waiting for the chance to spring out when you least expect it. Just because you can’t see it, doesn’t mean that it can’t see you, and it certainly doesn’t mean that it’s not already planning. Horror never sleeps, and neither do the demented masterminds behind one of the biggest halloween events in the country. It’s January, which means there’s only eight months left to panic before Universal Orlando’s Halloween Horror Nights 24 is breathing down your neck. 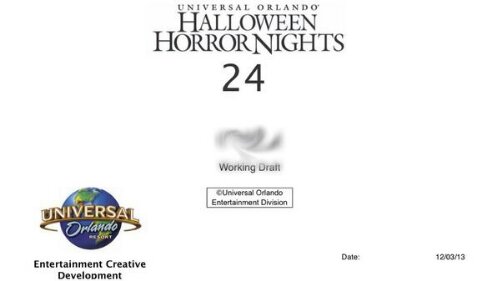 The official Halloween Horror Nights Orlando Twitter feed (@HorrorNightsORL) started the new year off with a tease for all the horror fans who are eagerly counting down the minutes until HHN 24 comes roaring back to life. Mike Aiello, Assistant Creative Director and official Twitter captain, has started the teases early with a cover page for one of the new mazes the team is working on this year.

We are well underway with our original maze development and are currently in talks with some amazing horror opportunities. No specifics yet.

So is this really news? Not really. This is how the season always starts, with drafts of mazes, and sketches. Last year there was three original houses (though La Llorona was based on a Horror Nights Hollywood House and Havoc was a sequel to another house) and this is just one house of many. It is a bit of a big deal for hardcore fans, who feel that original houses are always the best. However, Aiello and crew did say they were in talks with some amazing horror opportunities. That means more houses based on movies, or video games or even T.V. shows, all of which will be kept under tight lock and key until the time is right (or some over zealous fans crack the codes).

So with a new year, let’s talk about some rumors on what we can expect to see this year at Halloween Horror Nights 24. Please keep in mind that these are mostly rumors, and a bit of speculation. Until Universal announces it, it’s not happening and it’s just a bit of fun at this point.

That wraps up this edition of Rumor Mill. While we hear a great many things, remember it doesn’t always mean it’s true. Please keep in mind that until a park officially announces something, it’s still a rumor.

For more rumors, news and more be sure to stay tuned! Also be sure to follow us on Twitter @BehindThrills for the latest updates!

For more information about Halloween Horror Nights 24, be sure to check out the official website by clicking here!