Should the Anti-SeaWorld film, Blackfish get an Academy Award Nomination?

There is less than seven days left until The Academy of Motion Pictures Arts and Sciences will release their list of nominees for the 86th annual Academy Awards, or Oscars. For theme park fans, critics, and the newly discovered activists, there’s one question that is waiting for an answer. Will Blackfish, the anti-SeaWorld film that has gotten national attention, and swayed public opinion against the SeaWorld parks get  a nomination for best Documentary. While it’s more than likely a shoe-in that it will get a nomination, the question we ask, should it? 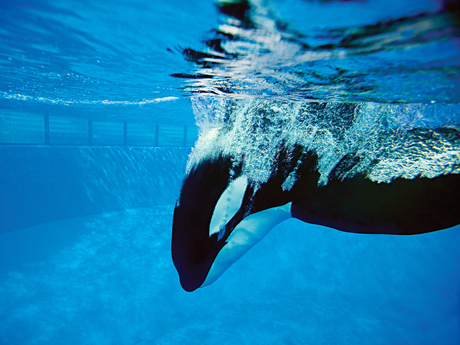 Blackfish has become a huge entity of a film. The film first had a festival tour, followed by limited theatrical release after being picked up by the newly established CNN Films in the summer of 2013. In the fall of 2013, a condensed version of the film hit CNN and from there the controversy bubbled over. Thousands of would-be activists took to the internet and became “copy and paste” activists. The controversy reached fever pitch in December when petitions on Change.org started taking aim at musicians playing concerts at SeaWorld.

From Barenaked Ladies, to Willie Nelson and Heart, many artists started cancelling their appearances at SeaWorld. (Click here to read more about it) While the bands had once played SeaWorld and even posed for picture with certain animals, many claimed that it was because of “SeaWorld’s treatment of the animals” that they were cancelling. What they didn’t tell, it was really about the thousands of activists who threatened to boycott, most not even fans.

With all the bands cancelling, schools cancelling field trips (also due to online petitions) SeaWorld,( who once took a “let’s let the storm blow over” approach) addressed the issue and set the record straight (click here for that response).

Now with awards season in full swing, and the “documentary” nominated for many awards, the film is more profitable than ever.

Here we pose the question. Does it even qualify for a the awards that it is being nominated?

According to the official website the filmmakers do not even approach the term documentary. They bill it as the following:

A mesmerizing psychological thriller with a killer whale at its centre, Blackfish is the first film since Grizzly Man to show how nature can get revenge on man when pushed to its limits.

While the other award nominations have already been announced, we are asking the Academy of Motion Picture Arts and Sciences to look at the qualifications of the film.

To qualify for the award, the guidelines, according to the official Oscar.com website are:

Truth is in the eye of the beholder, but sometimes good hard facts can prevail. Most of the public has been enamored with this film, and after watching it, declared they would not be returning to SeaWorld. Who can blame them? The film is emotionally manipulative, and uses the cute and cuddly whales who exhibit near human intelligence. Would the response be the same if it were to look at the plight of the sharks and octopus in captivity? Most likely not. Orcas, or Killer Whales as they are more commonly referred to, make for great sympathy makers.

But does the film qualify? In a recent interview with Mice Chat (read the interview here), Ex-SeaWorld Trainer Bridgette Pirtle, who served as a consultant on Blackfish, said that when she was first approached by the filmmakers, she was told about a completely different film than what Blackfish ended up being.

“Blackfish was a complete ‘180’ from what was originally presented to me.  Now, it’s almost like my worst fears are unfolding in front of me. ”

“The majority of the most current and most experienced insight was neglected from the film. With the exception of John Hargrove, there was a noticeable absence of relevant and credible killer whale experience from an individual who was aware of the situation before, during and after the incidents at Loro Parque and SeaWorld.”

If documentaries are supposed to focus on truth, wouldn’t it stand to reason that a film that had no individuals with credible experience could no longer be qualified? Also,  according to  Joseph Kleiman, editor at Themed Reality , dialogue in the film was edited into the trailer in a way to make SeaWorld appear they had said something about Dawn Brancheau which they never did.

Sure, documentarians have been stretching the truth and findings for years. Morgan Spurlock did it famously with his McDonald’s film, Super Size Me. While he gained weight and high blood pressure, people have been losing weight by eating at the fast food chain for years. Does it make what Super Size Me had to say incorrect? No. But if you stopped eating McDonald’s because of what he said, you’re just as guilty as the people who boycott SeaWorld because of Blackfish. Without doing the research, and finding things out for yourself, saying that you want SeaWorld to close and the whales freed because of Blackfish makes as much sense as blaming Ronald McDonald because you’re fat. There’s more to it than that.

A petition on Change.org has come online, asking the Academy to reconsider their nomination of Blackfish in the best documentary category. You can sign the petition by clicking here.

There’s more at stake than just SeaWorld profits. The end game of the film calls for the animals to be released and ultimately SeaWorld to be shut down. Science has proven that animals in captivity do not do well once released into the wild, so releasing them would be the same as sentencing them to death. Then you have the thousands of people who make a living working for SeaWorld in many different areas, including caring for the animals. In fact, SeaWorld has a huge conservation effort that has been ongoing for many years. The park has rescued, rehabilitated and released over 22,000 animals. A portion of the profits from the park goes to the conservation fund, and SeaWorld has been instrumental in education efforts not only in the park, but also in schools nationwide about the impact we have on animals, and what we can do to help.

If the ultimate goal of a documentary is truth, then the quote from Gabriela Cowperthwaite, director of the film is really disturbing. When Bridgette Pirtle told her she was going to expose the film, her response was “Please wait until after award season to criticize Blackfish”.

If that’s enough, there’s a sequel of sorts to the film. The film will be an adaptation of the book “Death at SeaWorld”. Naturally with the financial success that CNN and the filmmakers had, the books author, David Kirby is working on a movie version of the book.

As always, don’t believe everything you see in the movies.

Update 1-13-14
Our friends at Mice Chat has released yet another interview with a trainer who is speaking out against Blackfish (click here).
Mark Simmons was a trainer with SeaWorld for 13 years and was one of the first trainers to work with Tilikum in Canada before he was moved to SeaWorld. He has 27 years experience working with marine mammals and was featured in Blackfish.

He feels that he was also mislead on the intention of the film, and is now speaking against the film.

“Well, first I would say this is not a documentary, it’s an expose, but that’s not enough for me. I would tell them there’s a very Machiavellian undercurrent here. I don’t know why, and I don’t know what their purpose is. I have to assume that, on some level, Gabriela is looking for something that would launch her career, because that’s the only good that could come of it.

He goes on to say more about the trainers who were used more, and how shocked he was at how things were twisted around.

Our friend Joe Kleiman at Themed Reality has also released more information about Blackfish, including a frame for frame breakdown of the trailer (click here). The research paper disects the film and sheds some light on the truth behind the film. Be sure to check out both the articles listed above.

And the nominees are… The 86th annual Academy Award nominations have been announced . We honestly expected Blackfish to get a nomination for Best Documentary, despite many people coming out speaking about the “facts” of the film. However, it did not. It’s a victory for not only SeaWorld but also for those who are working to inform the public about good that SeaWorld does as well as the need for animal connections. That’s the true message here, regardless of your position on the film or captivity. We all need to work together to bring awareness to these animals in the wild. If we do it by having animals in captivity, so be it. As long as that person walks out more aware of not only killer whales, but the animals in the world period.

An article by Time Science states that by mid century roughly 50% of all animal species will be extinct in the wild. Places like SeaWorld will be the only place you’ll be able to see these animals. So, we have more important things to worry about than an agenda put out by PETA supporters and a film designed to tug at your heart strings. We need to everyone to do what they can to help.
SeaWorld brings the animals closer to you and makes you aware of not only the animals they care for, but the animals they rescue. With newer attractions like Antarctica, and Turtle Trek they get you involved in the conservation efforts and show you how doing every day things can help. Is it perfect? No. Is it for profit? Sure it is. They are a business, not a full blown charity. Can they change things? Yes, and they have in the past 50 years.

If anything positive comes from Blackfish, it’s that it opens a dialogue about the environment and the animals that really need our help. Freeing whales, killing problem whales and shutting down a business that helps and employs thousands doesn’t help.

Visit SeaWorldCares.com to find out what you can do to really help the animals.

TAGblackfish
Previous PostHAuNTcon Co-Locates With The Halloween & Party Expo! Next PostBands cancelling out on obligations with SeaWorld due to Blackfish backlash