The magic of Harry Potter captured us all, some of us from the books, others from the films, and even more still from the theme park attractions that continue to expand. One of the key elements in bringing that magic to life was the way that the witches and wizards used their wands in the film. Over the weekend, Universal Orlando’s Celebration of Harry Potter brought the magic of the Harry Potter series to life in ways that most fans have never witnessed, as they brought the world’s only wand combat choreographer out to not only show how the magic was made, but also to teach a few lucky fans how to duel just like the Boy Who Lived. Guests were in for an extra special treat when one of the highest ranking members of The Order of The Phoenix joined them. 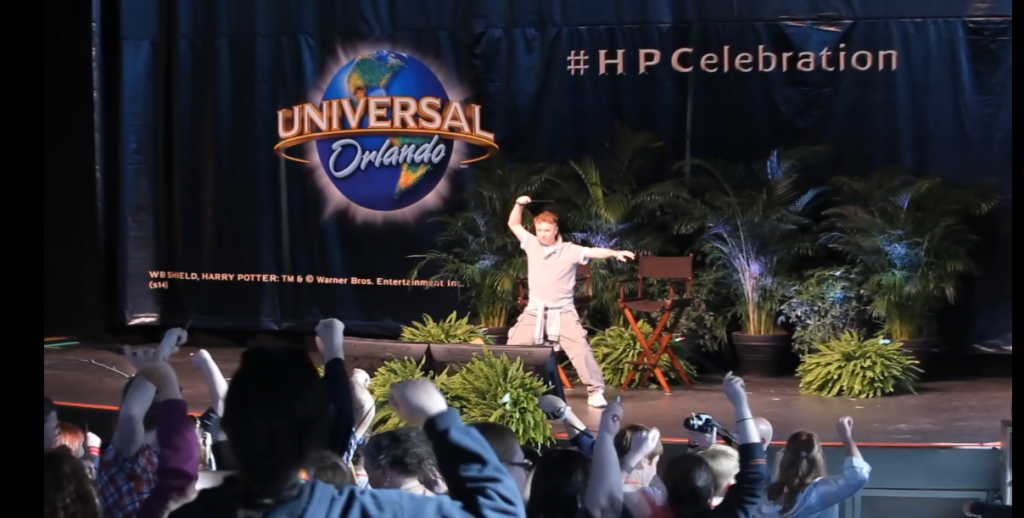 Universal Orlando’s Harry Potter Celebration brought fans face to face, and wand to wand with several experiences they may have never had before. One such experience comes all the way from The Harry Potter tour in England, and teaches fans how to master the basic moves of wand combat. Wand combat, you see, is the art of defending yourself from magical attacks from other wizards. At least that’s what you’re supposed to believe when you see it on the screen. Judging by the success of the Harry Potter films, many do. Wand combat, however, wasn’t always a real life art form. It was invented specifically for the films by Paul Harris, who was choreographer on Harry Potter and the Order of the Phoenix. Before then, wand combat was relegated to the second film-Chamber of Secrets, and was more fencing than art. Harris invented the combat technique using his knowledge of dance, and Kung-Fu.

Paul took the audience through several of the same moves that he took the cast through, and the same moves that he takes visitors through in his interactive tutorial at Harry Potter tour. As an added surprise, he brought several fans who demonstrated excellent wandmanship (if that’s really a thing!) from the audience on stage to give them a personal demonstration. After the fans got the hang of things, Harris brought on a special guest. 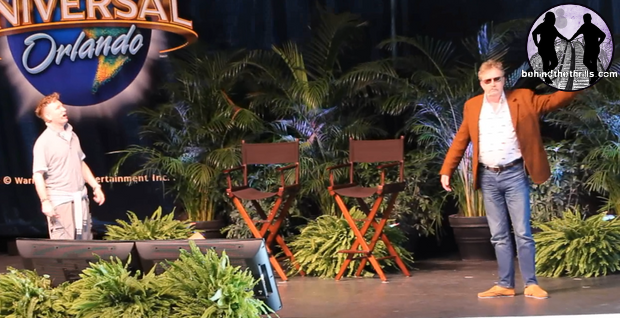 Mark Williams, better known to fans as Arthur Weasley-the proud patriarch of the Weasley family, came out to talk about his wand handling days, in grand bad-ass fashion.

“We loved our wands” Williams recalled “It was like our demons (for those familiar with the Dark Materials trilogy) it was part of us.”

Fans were then in for a real treat when the “Ministry enforcer” himself brandished his wand and took up Harris and his army of wizards in a wand duel. The results were absolutely hilarious.

Check out our video below with Harris and Williams as they duel it out on stage:

The wand demonstration, and duel was all part of the weekend at Universal, dedicated to fans of the series. Even several years after the last books and films, Harry Potter still garners worldwide attention. It’s a great treat to see some behind the scenes, and hear from the people who actually worked on the film, to bring a new perspective to it.
Watch the entire panel below, including a hilarious interview with Mark Williams:

After the wand panel, we were given the opportunity, along with several others, to try our hand at wand combat. As you’ll see from the video below, it’s not as easy for some as it is others.

It takes a dexterity, and nimbleness that I lack. Still, it’s amazing to see the kind of work and effort that goes into making something that lasts for less than ten minutes on film.
Check out even more pictures of the wand demonstration and class in the slideshow below:

For more information about The Wizarding World of Harry Potter, visit the official website by clicking here!