I solemnly swear I am up to no good…but Universal Orlando seems to be doing plenty of it as they announce not only the opening of the next installment of The Wizarding World of Harry Potter, but also the plans for their newest event, A Celebration of Harry Potter. The three day event will beginn just a day after Universal unlocks the secrets about Diagon Alley, and will celebrate all things Harry Potter. Universal Orlando has also revealed who they will have on hand for guests as well. 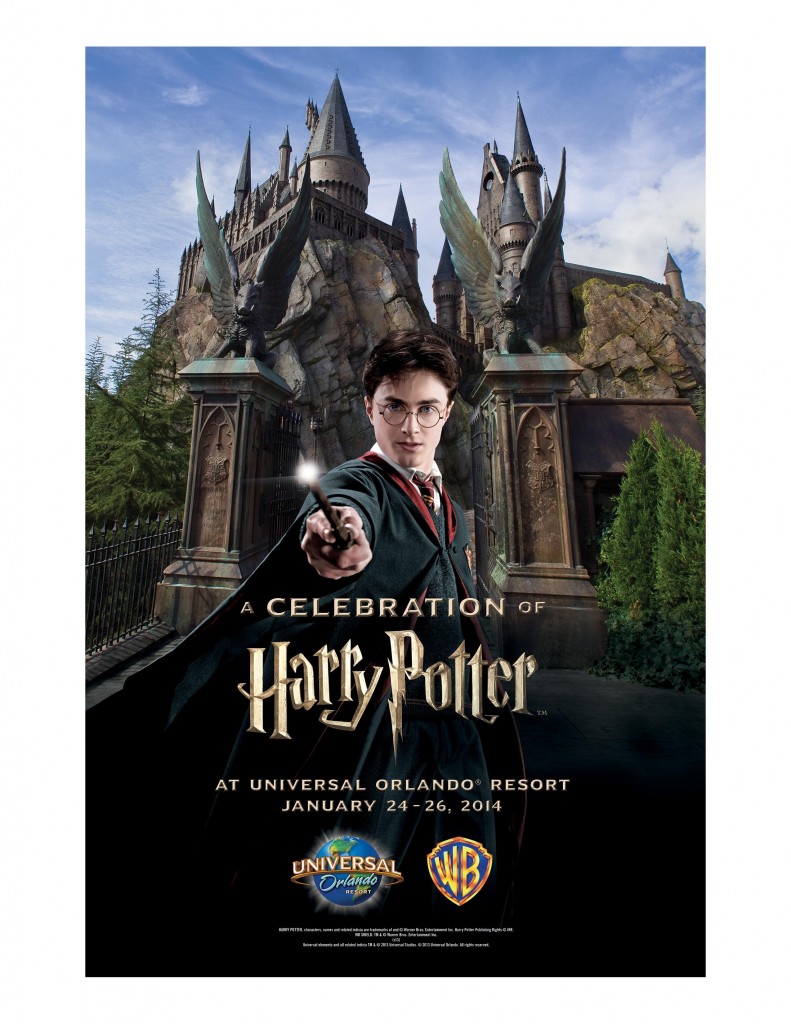 January 24th guests will be treated to three days of Wizards, magic and of course, behind the scenes looks at one of the biggest franchises in history. A Celebration of Harry Potter will bring some of the cast and crew together to talk with fans and guests about the films, and even get a glimpse at the all new Diagon Alley, which is slated to open in Summer of 2014. James and Oliver Phelps (Fred and George Weasley) as well as Evanna Lynch (Luna Lovegood) are all scheduled to be on hand for a Q&A session with guests. All events will be included with theme park admission, and all panel discussions will be on a first come first serve basis. While we don’t have the times just yet, we will let you know when they are released.

Other activities included in the event include wand dueling, a look at the new covers for the books, new information about Pottermore and even more!

Also as part of the event is the all new Harry Potter Expo, which will be located in one of Universal Orlando’s massive soundstages. Guests will be able to get a glimpse of all their favorite Harry Potter memorabilia, including stamps, and book covers. Guests will also be able to get a look at the London Tour which takes guests into the film by walking along sets used in the film.

The weekend event is being presented by Universal Orlando and Warner Brothers Entertainment. The event is included with paid theme park admission, and will also be included for Universal Orlando annual passholders. If you do not have an annual pass, guests will be able to purchase a special 3 day two park ticket  that will get access to all the huge events planned.

Universal Orlando has told us that they will be adding additional talent to the line up in the coming days. Pay attention to the official Universal Orlando Facebook page for the announcements.

If you can’t get to the festivities, or just want to ask a question to some of your favorite cast members, Universal will be having a live Twitter Discussion on January 24th.

James Phelps, Oliver Phelps and Evanna Lynch are kicking off our A Celebration of Harry Potter event with a Q&A. Tweet your questions to us @UniversalORL using #AskHPCast to join in. Then, stay tuned to twitter.com/UniversalORL to see the LIVE discussion on 1/24!

It really seems that Universal is going all out for this year’s event, and it could very well become an annual celebration, much like “Star Wars Weekends” at Disney’s Hollywood Studios. That event is a huge success, and if Universal can pull in the celebrities, as well as give some great features like maybe a special show every year, it could very well pay off for them.

Via the official Universal Orlando Facebook Page, two more cast members have been announced for this year’s Harry Potter Celebration.

Special guests Mark Williams (Arthur Weasley) and Matthew Lewis (Neville Longbottom) will also be joining us for the Celebration of Harry Potter event this weekend! Be sure to join us!

Daddy Weasley AND Neville Longbottom? Arthur was one of my favorite characters in both the film and the books, with a grace and goofiness that many dads could relate to. Matthew Lewis’s Neville was one of the bigger surprises in the films as he matured surprisingly, and was a great focus in the final films.

Universal has just released the full schedule for A Celebration of Harry Potter for the weekend! Keep in mind that the schedule is subject to change, so be sure to pick up a schedule at the park.p

What are you most excited about seeing at A Celebration of Harry Potter? Let us know in the comments below!

Stay tuned for more updates, and be sure to follow along with us on Twitter @BehindThrills for the latest!