Wild Days at SeaWorld Orlando give a glimpse at animal care, conservation and rescue

SeaWorld Orlando kicked off their Wild Day Weekends last week with the emphasis being not on entertainment, but rather on the other things that SeaWorld does, namely rescue and rehabilitation. The park opened it’s doors and backstage areas to several new features, and tours. It’s a side of SeaWorld we haven’t seen in a while, but it still drives home the core message that the park constantly tries to drive home with it’s attractions, shows and exhibits. Make a connection with the animals, and make a difference in the world. 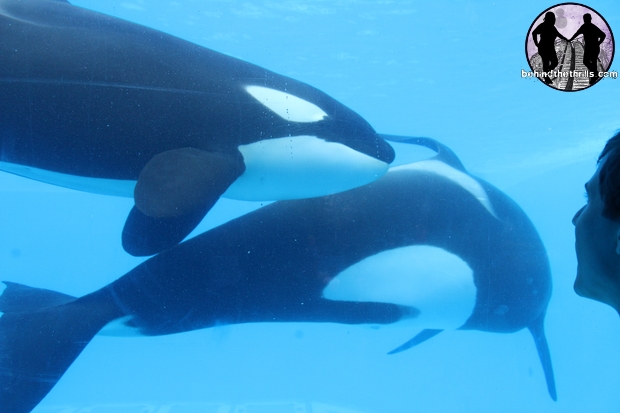 Wild Days is a collection of days where guests can get up close and personal with the animals of the park, and up close with the people who make a difference. During the past two weekends, Wild Days have featured appearances by Jack Hanna, and the cast of the SeaWorld television show Sea Rescue. This coming weekend, the park plans on getting you up close and colder than ever with the best dressed little birds in the world, Penguins. Penguin specialists will be on hand to talk about the animals and take guests behind the scenes. 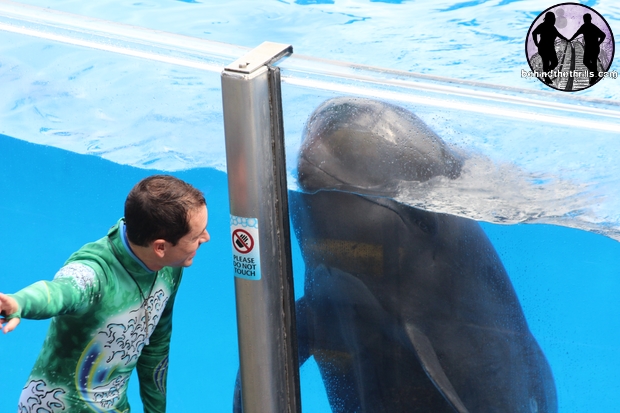 Let’s be 100% honest here. The anti-SeaWorld film, Blackfish has brought about a lot of misconceptions, and negativity about the SeaWorld parks. It has brought to light a lot of negativity to an otherwise positive experience. While Wild Days was announced long before Blackfish was released, the message that SeaWorld wants you to take away is that, despite what the filmmakers behind Blackfish might want you to believe, SeaWorld has always and will always care about the animals that it takes care of and rescues.

Before several shows, guests are treated to trainer talks, where they talk about the rescue and rehabilitation that each park does. Before Blue Horizons, trainers come out to talk to you about Pilot Whales. Pilot whales are not featured anywhere in the park, so why talk about them? Because SeaWorld is home to several pilot whales that beached themselves about a year ago on the shores of Florida beaches. SeaWorld assisted in the rescue of the whales, and nursed them back to health while the government decided what to do with them. When a marine mammal is brought into captivity through a rescue, it’s the U.S. Government that makes the final decision what to do with them. If doctors and veterinarians feel that the animals rescued can’t be released, then the animals will have a permanent home found for them. It’s out of SeaWorld’s hands. In the case of the stranded pilot whales, it was determined that SeaWorld was the best place, with enough staff and resources to not only care about the whales, but also try and determine why they continue to beach themselves.

Watch as the trainers talk about the pilot whales before Blue Horizons:

Other trainer talks include learning about Sea Lions and Walruses before Clyde and Seamore take Pirate Island, and of course at Shamu Stadium. 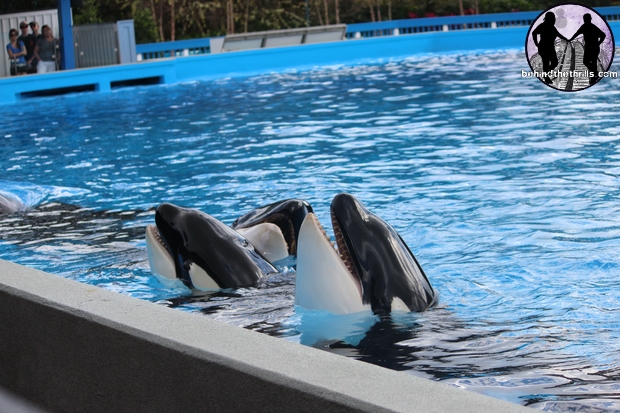 One of the new additions brought about by Wild Days is the all new Shamu Up Close experience. The experience let’s you get next to the whales and not only see them, but learn about them. The trainers do periodic training sessions with the whales, and allows guests to get a glimpse at just what they go through on a daily basis. Shamu up close will be an on going experience until April while Shamu stadium is closed. The stadium is currently undergoing maintenance, which many guess include the installation of rising platforms in the floor of the main pool.

Watch as trainers interact with the whales, and we get a look at Shamu Up Close:

One of the biggest things happening throughout Wild Days is the opportunity to meet and see animal ambassadors that you might be familiar with. Jack Hanna, who has made several appearances on the David Letterman, and his own TV series was on hand for the first weekend. We were there for his very first show of the weekend in which he addressed the issue of Blackfish, and why it’s more important than ever that we continue our commitment to animals. Watch the video below:

Jack went on to put on an amazing show in which he talked about more animals, and the conservation efforts that go on around the world. He also had a little camel trouble.

Julie Scardina will host a show all about penguins as she shares her lifelong love of animals and the parks’ commitment to wildlife conservation and as well as tell stories of her trips around the globe from continent to continent. 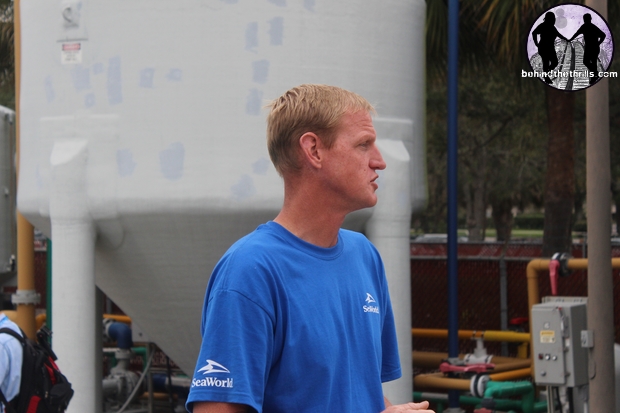 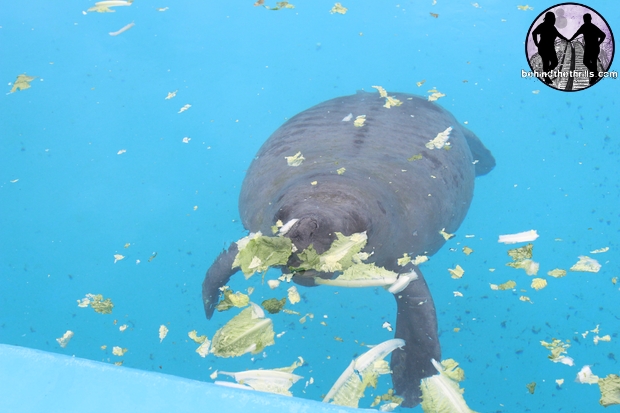 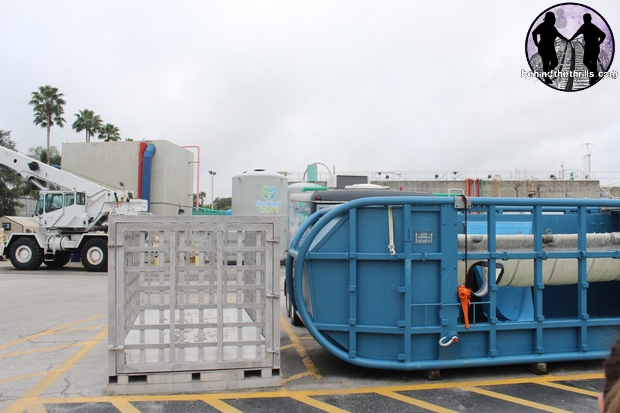 While it’s not part of Wild Days, we were taken on a brief portion of the Behind the Scenes tour. The Behind the Scenes tour takes you just as it says, behind the scenes in a 90 minute walking tour. You’ll get to see penguins, touch sharks and go behind the scenes of some of the biggest exhibits at SeaWorld Orlando. You’ll also get to see the rescue and rehabilitation facilities at SeaWorld, which is where every rescued animal that SeaWorld helps comes. Guests will be able to not only see the rescued animals, but also the methods and transportation that is used to rescue the animals. Manatees, dolphin and sea turtles are just a few of the many different types of animals that you’ll get to see during the tour that have been rescued.

Check out even more pictures and highlights from SeaWorld Orlando’s Wild Days in our slideshow below!

Can’t view the slideshow above? Click here to see all the pics!

Wild Days will conclude this weekend with Penguin Lovers Weekend, where guests can learn more about penguins from an animal ambassador who has traveled with the birds all over the continents, Julie Scardina. The park also has some amazing deals happening right now. This weekend only, if you bring in a recyclable Coke product guests can buy a Fun Card and get one for free. Be prepared to stand in line for that great deal. Fun Cards are good throughout the rest of the year, and give you unlimited admission to SeaWorld, and all of the events included in park admission such as the upcoming Bands, Brew&BBQ festival.

Stay tuned for more SeaWorld updates in the very near future. Be sure to follow along with us on Twitter @BehindThrills for more!

For more information about SeaWorld Orlando, visit the official website by clicking here!

TAG2014 Attractions SeaWorld Orlando Wild Days
Previous PostThe Truth About Blackfish-SeaWorld and it's trainers speak out about the messages portrayed in the controversial film Next PostAparecium! Revealing charm removes scaffolding to reveal London side of Wizarding World of Harry Potter at Universal Studios Florida