Florida was the first area in the United States to be settled by European explorers. It’s home to the oldest city in the world, where many different things have happened. We have a rich, dark history of conquering conquistadors, tragic accidents and serial killers. With all the major happenings, it’s logical to think that some of that energy, or some of those memories are left behind, and the ghosts of these happenings are left to haunt the places that they once roamed. That is the focus of the all new Ghost Tours at Legends:A Haunting at Old Town. Most nights it’s a spine tingling, interactive game of cat and mouse where actors chase you through the grounds of Ashdown&Sons-but what happens when the animatronics go off, and the actors aren’t around? What about Old Town itself? Are guests and workers hanging around Central Florida after their tours in this earth are over? 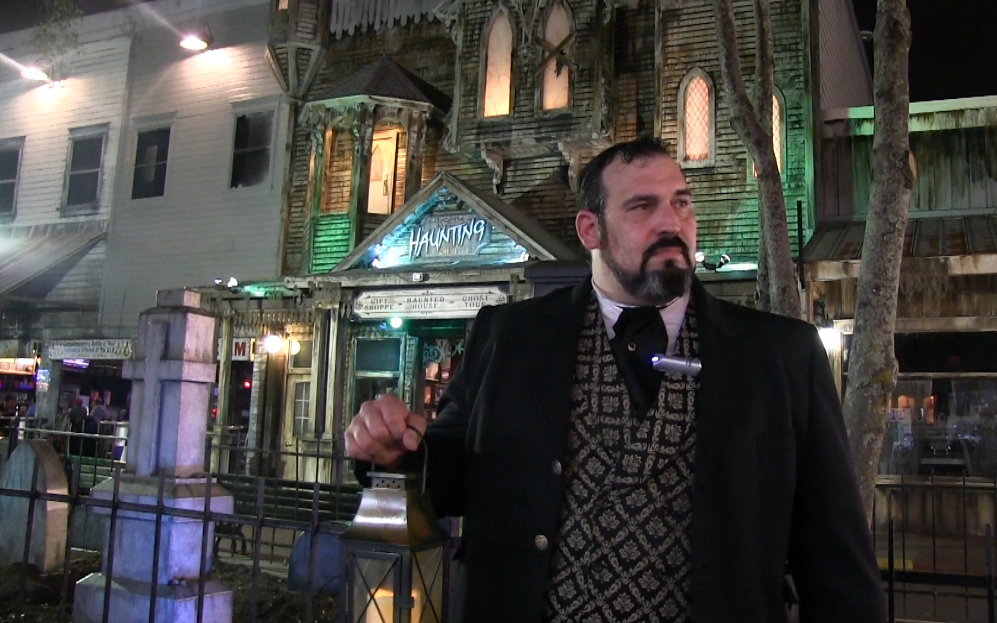 That is the subject of the all new Legends Ghost of Old Town Tours. Are we truly done with this world when we shuffle off our mortal coil? Do places that we visited or died keep us bound here, or are traces of the energy we had still lingering.
Dan Carro, who normally scares guests as the sinister Archibald Ashdown, lead us on a walking tour of Old Town to discuss that very subject.
Video-Opening statements from Dan Carro about Ghosts of Old Town

In order to keep the surprise, and to conjure all the spirits we could, we elected to not take pictures or videos during the tour. We weren’t disappointed. The tour starts where it all ends for most people, in the graveyard. Carro reads off a fitting passage of Edgar Allan Poe to set the mood, and tells tales of not only Old Town, but also many different attractions in Central Florida. The tour is about 90 minutes long, and involves a lot of walking and stair climbing. Lit only with a lantern, Carro takes guests through the different spots of Old Town where spiritual activity has been recorded. Is it all true? Maybe, but that’s what makes ghost stories so fun. You are given a tale that is rooted in some kind of legend, some kind of truth. It’s up to you to decide whether or not you believe the story that is told.
The tour goes from the streets and shops of Old Town, where you hear many ghastly tales, and taken inside of Legends-A Haunting at Old Town.

During normal operating hours guests get the living hell scared out of them by actors. However, once the lights are out and the actors are gone, the place takes on a life of it’s own. The tour goes into the haunt, and gives you a behind the scenes look at some of the different areas that the actors normally man, while waiting for victims to come by. Here’s a fun fact that isn’t widely known, some of the props and decorations that are used in the haunt to give it a “creepy” funeral parlor vibe, are actual instruments and pieces that were used in Victorian era funeral homes. There are pictures hung all over the walls of actual dead bodies being photographed for the last time.

In the 18th Century, and into the early 19th century, death was a big business. There were was a whole fashion line just for those who mourned, there were special casket designs that were made to keep from burying people alive. What we see as a very simple and morbid process today was an entire industry in those days. The tour takes you through every step, explaining why things were so intricate and why it was customary to follow things to the letter.

The tour then takes yet another turn when the group is taken even further into the haunt and told about the spirits within. Everything from strange happenings, to a presence felt have been reported. On a few of the tours, a few stationary items have been moved, and in one case the pendulum of a clock that had no power to it, and no key to make it turn began to move. We didn’t witness any strange occurrences during our tour, however we couldn’t shake the heavy feeling we felt in certain areas. Racheal began sneezing profusely, something that hadn’t happened on our other visits to the haunt. The second we stepped outside, all was removed. Is it a spirit within the haunted attraction, or merely something we felt because of the power of suggestion? Perhaps our minds were just playing tricks on us because of the scary stories. Whatever the case may be, the experience is different for everyone.

The tour isn’t a haunted attraction, but it IS a journey into another world through stories and experiences. It’s definitely a must see for those who believe in the supernatural, but more importantly it’s a must see for all of the skeptics. I can’t say for sure if it made a believer out of me, or if the things that transpired afterwards were just an effect of my overactive imagination, trying to digest what we had experienced.

The haunt and the ghost tours are two different experiences. While the Haunt is designed to scare you, and make you panic, the ghost tour isn’t. There are no frights, nothing hidden, though I did have a moment of panic as we rounded a corner and were face to face with one of the animatronics. A haunted attraction is very scary when the lights are off and there’s actors in it, but it’s even more terrifying than you can imagine when everything is off and the actors have all gone home. As is the case with the haunted attraction, the staff is the main attraction here. Dan put a lot of thought and did a ton of research, not only for the benefit of the tour, but to help people understand that it’s very possible we may not be done on this plane, once our bodies are.

Now, I’m sure you’re asking what happened after the tour? Well, I can’t exactly say…but at a certain time, we’ll just say that I was pretty sure that a ghost had followed me home.

Stay tuned for even more haunted happenings. Be sure to follow along with us on Twitter @BehindThrills.

The Ghosts of Old Town tour is offered Tuesday and Wednesday nights and is $20 dollars per person. For more information, visit the official Legends-A Haunting at Old Town Facebook page by clicking here!

TAGGhost Tours Legends Dark Amusements Legends-A Haunting in Old Town
Previous PostWhat a buncha a-holes: Is Disney ready for The Guardians of the Galaxy? Next PostUniversal Orlando to create almost 3,500 with huge 2014 expansion

Legends: A Haunting in Old Town named a “Best Year Round Haunted Attraction” just in time for Halloween!

Meet a Ghost Hunter this weekend at Legends: A Haunting in Old Town