Remember when: A look back at Universal Studios Orlando’s Ghostbusters

Theme parks expand and move at such a rapid pace. Sometimes it calls for leaving behind attractions that may have lived past their time, or may not be well attended. Unfortunately a part of progress, and fortunately does make way for tons of great new experiences. Join us as we take a look back at the theme park attractions of yesterday, and remember when. 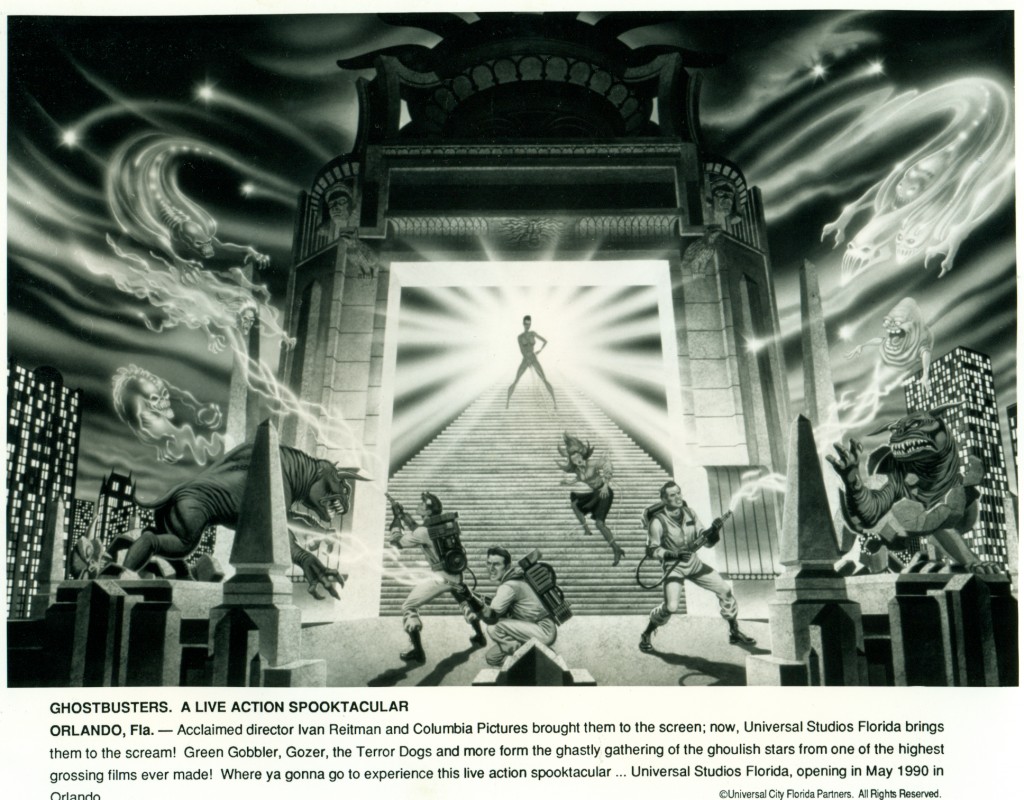 Today, in honor of the great Harold Ramis who passed away, we take a look back at one of the original attractions that opened with Universal Studios Florida in 1990. The Ghostbusters Spooktacular was a roughly twelve minute show that took guests to the rooftop of the huge apartment building from the classic 1984 film. The show was the first of it’s kind, mixing pepper’s ghost effects, live actors and even animatronics. In the show, guests would pile in front of the Temple of Gozer,  from which the ghosts emerge in the film. A tour guide starts telling us all about the set when strange happenings start occurring. Through a series of practical, and really cool effects, ghosts start appearing to terrorize the tour guide, and the theme park guests. The doors then swing open and Gozer pops out, who asks the one question that you always say yes to.

When the tour guide says no…well you know what happens next. Gozer starts hurting the guide, and just when it seems she’s done for, the Ghostbuster theme song comes on and the guys take turns trying to make this chick toast….or turn this chick into toast…or simply blast her. Gozer then escapes, and makes the guys choose their fate. The Stay Puft Marshmallow Man appears, and the guys have to save the day by crossing the streams, blowing the giant marshmallow man away, and of course saving the day. 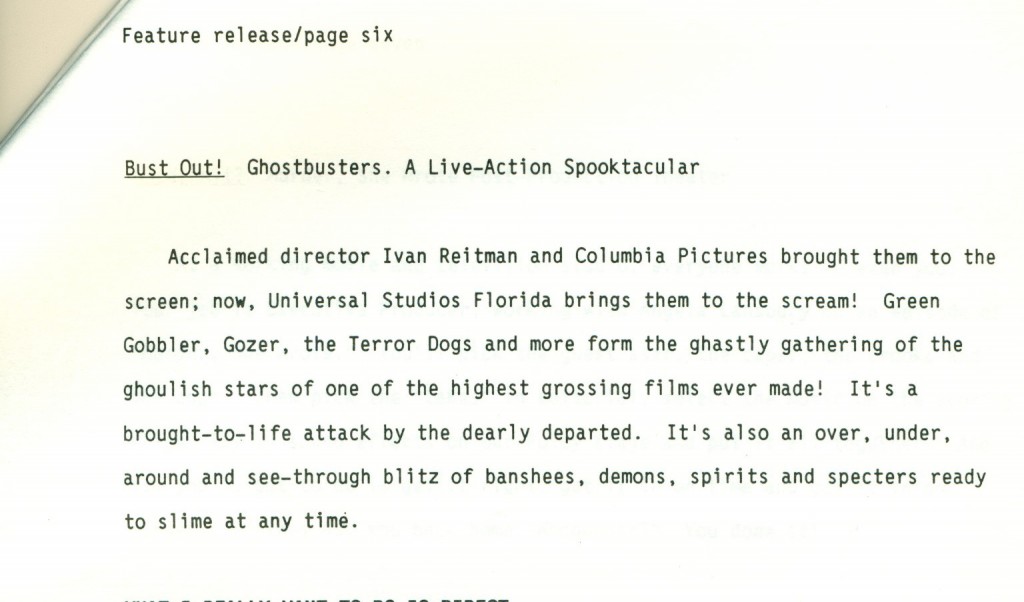 The attraction was a huge technical marvel of the time. It used methods that were, up until then, only used on dark rides or attractions where guests were away from the action. The stage show put guests right into the middle of the fight, and had them witness Ghostbusting first hand. The Stay-Puft Marshmallow Man was a huge animatronic, that rested on a giant arm that rested behind the stage. That huge arm is still there to this day, but now it holds props from Twister:Ride it Out. When the Ghostbusters blasted him with their streams (instead of blasting the door like the movie) he blows his top and the entire theater was covered in fog, giving Stay Puft enough time to slink back behind the stage.

The show only ran for two years in that form. In 1992, the queue portion was extended, and the show itself was shortened. The queue brought guests into the story of being potential Ghostbuster Franchise owners, for the low price of…well, it wasn’t that low. Of course Walter Peck comes in and wrecks everything, sending ghosts free. This version of the show only had the Ghostbusters on stage for less than two minutes. It lasted until 1996, when it finally closed for good. 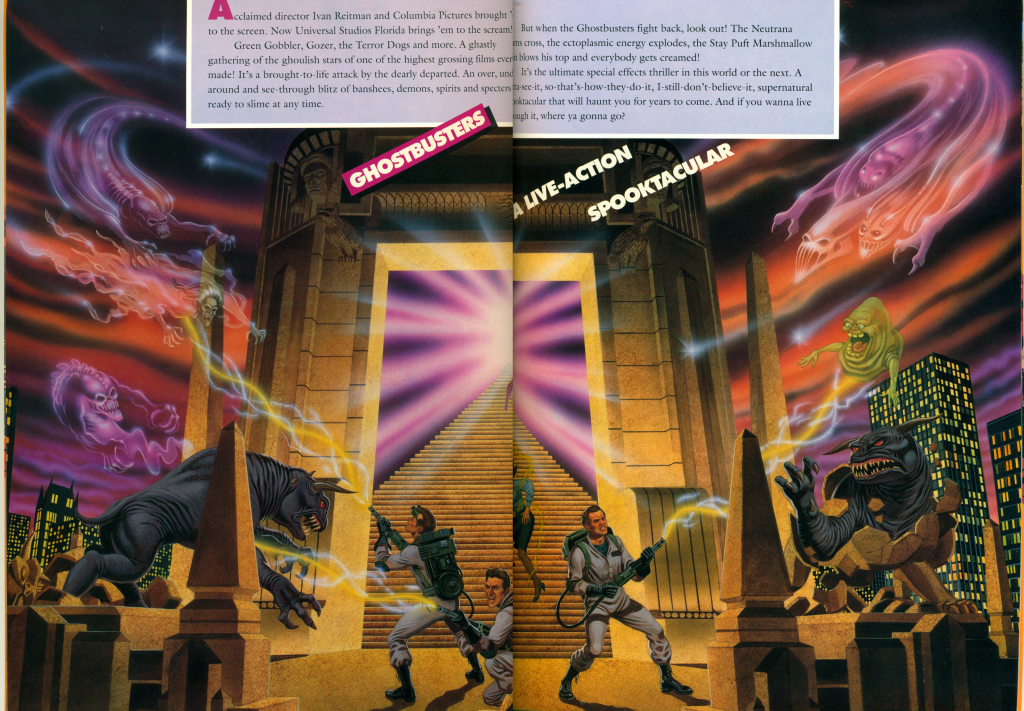 In addition to the Ghostbusters show, there was also a street show where they would battle Beetlejuice. Eventually Beetlejuice got his own show, and the dancing and ghost fighting went away. A version of the show would come back in 2003, but that was very short lived.

The attraction also had a gift shop themed to a paranormal research shop. There were tons of great visuals, and guests could purchase things like proton packs and t-shirts.

Video-Walk Around the Paranormal Merchandise shop

Unfortunately, the only thing left of The Ghostbusters, is the New York Library facade at the end of the street. The time for busting ghosts, unfortunately has passed. With the passing of Harold Ramis, a third film is most likely out of the question, and so are hopes of reviving the Ghostbusters at Universal Studios Florida. Now days, the park is filled with giant battling robots, yellow people, and soon a boy wizard. The entire resort has grown and has become a worldwide destination. While it’s sad to see certain attractions leave, it’s even better to see entire parks thrive.

Stay tuned as we bring you more blasts from the past, and bring you even more old school Universal Studios Florida. Be sure to follow along with us on Twitter @BehindThrills for the latest updates.