How fast does a cheetah take off? Apparently so fast that some times it runs out of juice during the middle of a run and needs to take a break. That’s the case today as Busch Gardens Tampa’s latest coaster, Cheetah Hunt has Tampa fire and rescue working to get people off the coaster as one of the trains on the coaster has gotten stuck. 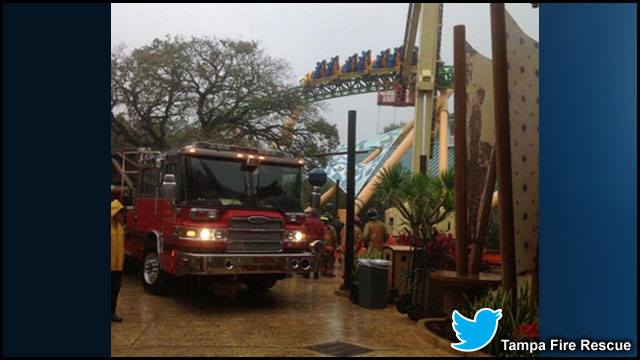 Cheetah Hunt is the latest coaster built at Busch Gardens Tampa, the coaster opened in 2011 to rave reviews. It’s a multi-launch coaster that uses LIM (Linear Induction Motors) that uses magnets to push the coaster off at high speeds. According to WTSP(click here for breaking news), the coaster became stuck with 16 riders on board in an area “hard to reach”. The coaster is in an area between launches, and is stuck on the track. The term is commonly referred to as “valleying”, which is simply when the coaster can’t make it between two break points. Mostly the term refers to a coaster that can’t make it up to the top of the next hill, though sometimes it can happen when conditions on the track, or with the wheels cause the coaster to stop suddenly.

It’s a relatively common problem, and nothing to be alarmed about. The media tends to blow coaster malfunctions out of proportion, simply because they happen so frequently. Coaster malfunctions do happen from time to time, but it’s hardly an every day occurrence. Serious injuries on coasters happen even less frequently. The last major accident on a coaster happened in 2013 when a woman fell out of the “New Texas Giant” at Six Flags Over Texas. The cause of that accident is under investigation, though it is believed (at this time) to be a combination of rider and manufacturer error, and generally considered to be a freak accident.

While Cheetah Hunt getting stuck is a rare occurrence, it does happen from time to time. During the media preview for Cheetah Hunt the coaster stopped without warning on the track, while we were on it.

So, it does happen from time to time. Still, it shouldn’t sway you from riding, as we were right back on our way moments later. This time the coaster just didn’t stop in a convenient place, and it was made even worse by an approaching storm.

Fire rescue are taking people off of the coaster, though it’s a slow process. At this time the coaster has about 13 people still on the ride. As expected, no injuries have been reported.
Update
Busch Gardens Tampa has released an official statement via their Facebook page:

At approximately 2:30 p.m. the Cheetah Hunt roller coaster unexpectedly stopped mid-ride with 15 guests on board. At the time the ride launched, weather conditions were clear and no storms were present. There was no indication of any operational issues with the ride prior to the launch. After attempts to shift the car back to its station proved unsuccessful, the decision was made to evacuate the ride. With the help of Tampa Fire Rescue, all passengers were safely evacuated and no injuries have been reported. The exact cause of the ride stoppage has yet to be determined. Busch Gardens takes the safety of its guests and employees very seriously and will conduct a thorough review of the coaster and its systems before reopening the ride.

Update: out of an abundance of caution Busch Gardens has decided to delay the opening of Cheetah Hunt to conduct additional testing to confirm the ride is operating as designed. Once the testing is complete, we will reopen Cheetah Hunt.

Update
Cheetah Hunt is now open, after a day of being closed.

Busch Gardens has confirmed Cheetah Hunt is operating within its design parameter and is open for guests today, Feb. 14. Safety systems for the ride performed as designed and all guests are able to safely disembark from the ride. All ride attractions are inspected daily by trained technicians to ensure they are operating properly. The safety of guests and team members is Busch Gardens’ highest priority.

So the coaster is deemed safe, and the rollback was just an odd occurrence.
Stay tuned for more information as we follow the story, and be sure to follow us on Twitter @BehindThrills for the latest updates!