Throw me something mista! Behind the scenes at Universal Orlando’s Mardi Gras

Universal Orlando’s Mardi Gras is in full swing, with the hottest bands, the most food, the most beads, and the biggest celebration this side of the bayou. This year is bigger than ever, stretching out to kickstart the summer. So how does the biggest celebration happen? We had the chance to not only check out this year’s parade, but also go back stage and talk to the people who make it happen. From the floats, all the way to the food, Mardi Gras is a big production. 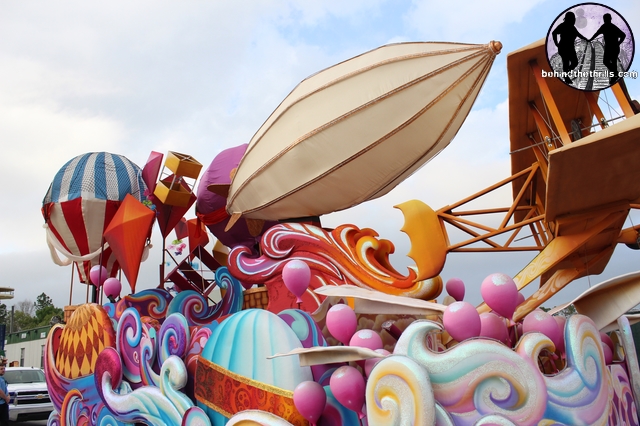 This year the parade is bigger and brighter than ever. The parade itself this year tells a bit of a story. It takes the world of the classic Jules Verne book, Around the World in 80 Days and brings it to life in three all new floats. Last year, there were four new floats that focused on locations around the world. For the first time ever, the two themes meet and actually play off of each other, as the story unfolds. On one float you’ll see the progression of everything taking flight, as it goes from kites, airplanes, zeppelins and even a hot air balloon. 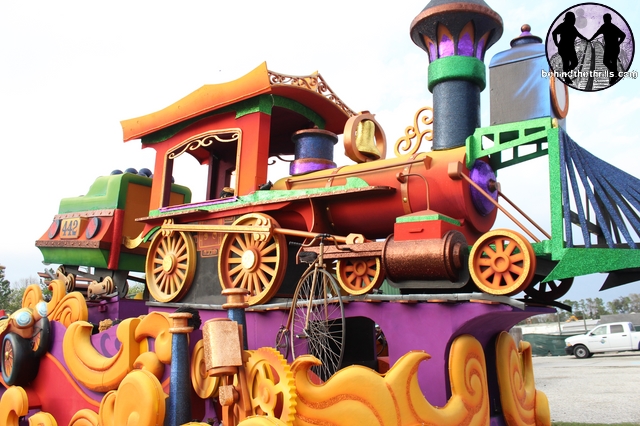 By Land takes you from train, to bicycle and even car as the duo races around the world. Each little piece is intricately detailed, and amazing to look at. 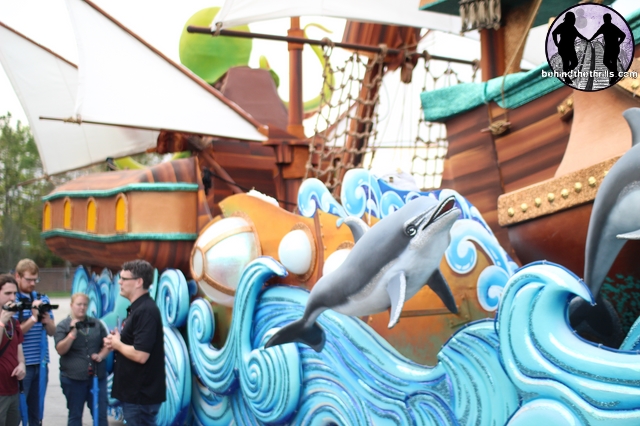 Set Sail takes you on a voyage through the ocean. There of couse is a huge ship, smiling dolphins and a huge friendly octopus. If you look closely, you might see the form of a very familiar submarine cresting through the waves as well. If you’ve been going to Mardi Gras a while, you may see some familiar props and pieces. That’s because each float is hand crafted by Blaine Kern Studios. The Studios are located in New Orleans, where the floats are built, which makes the floats authentic New Orleans Mardi Gras floats. Occasionally floats are sent back to Blaine Kearne to either be refurbished or updated completely. Sometimes pieces of the old floats will be used to create all new floats. 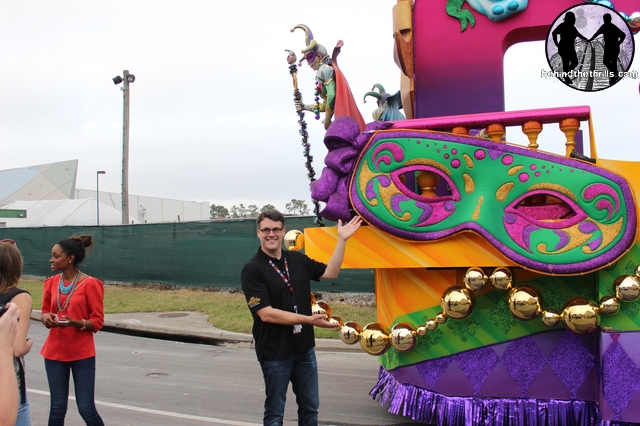 If you look closely, you’ll see the name of the ship-The Lissa. That’s short Melissa, Patrick Braillard’s wife. Patrick Braillard is one of the creative members at Universal Orlando and helped to design this year’s Mardi Gras floats. In fact, he was inspired by the idea after reading the book while waiting for a plane. 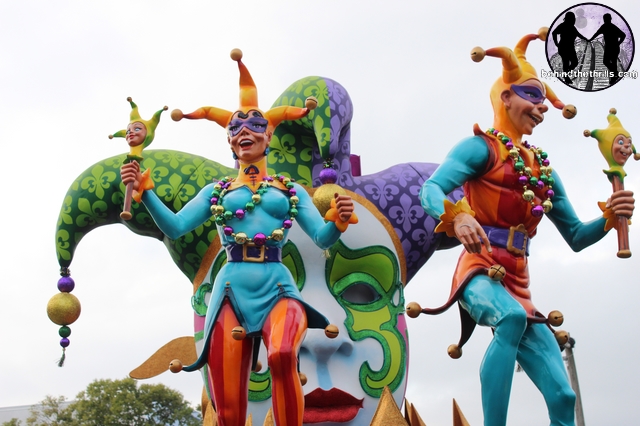 Also new this year is the Jester Float. While the Jester float has always been a part of Mardi Gras, this year the float has undergone a bit of an update, featuring a new mask and some classic characters. To celebrate the new float, Jester now leads off the parade, something that has been traditionally lead off by the classic riverboat. It’s always a tough decision which floats make the cut from year to year, but every year some Mardi Gras floats are seen for the last time. The only ones that are safe are the traditional floats such as The King and Queen, The Jester, Riverboat and King Gator. Here’s another fun fact-every night Universal goes through about 166,000 sets of beads. If you do the math, that’s over 3.1 million strands of beads during the 19 nights of Mardi Gras. That’s enough to stretch from Universal Orlando to New Orleans and back twice! 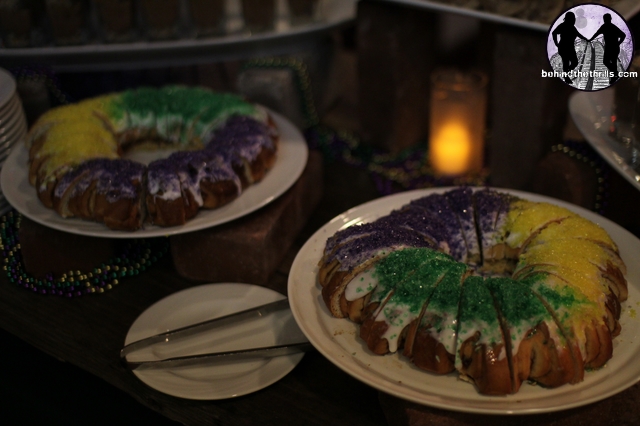 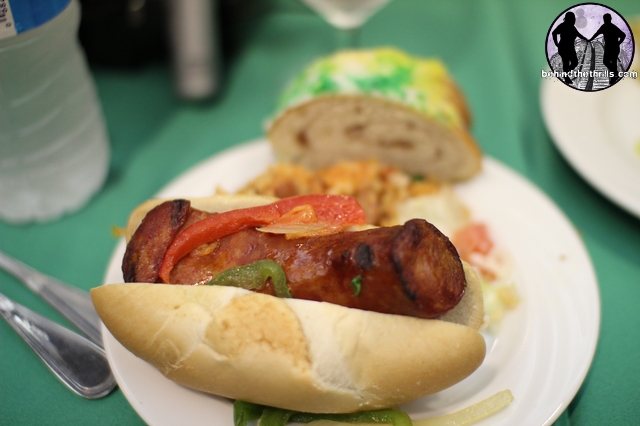 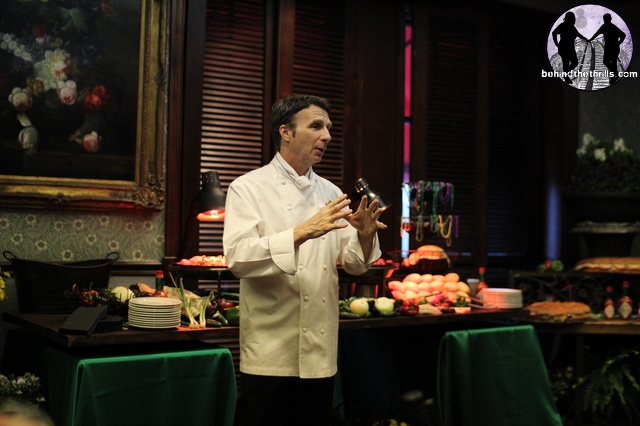 Food is also a big part of the celebration at Universal’s Mardi Gras. Dishes inspired by the many flavors of New Orleans are present in the French Quarter portion of the park. Universal has taken liberties with things such as chicken wings, and potato sticks, but the authentic flavors of gumbo and jambalaya are also available in the French Quarter. Of course you can’t go to Mardi Gras without the traditional King Cake. King Cake is a flaky pastry with icing made in the traditional colors of yellow, green, and purple. King Cakes usually also have a toy baby inside. It’s said that the piece with the baby will bring wealth and prosperity throughout the year. It’s also tradition for the person who finds the baby to make the next King Cake. You’ll find no baby in the King Cake, Universal doesn’t think you want to make enough King Cake for the millions who come to Mardi Gras.

We’ve brought back our weekly video cast-BTT Weekly to take you behind the scenes at Universal Orlando’s Mardi Gras. This week we talk with Patrick Braillard from Universal Creative, and Executive Chef Steve Jayson. 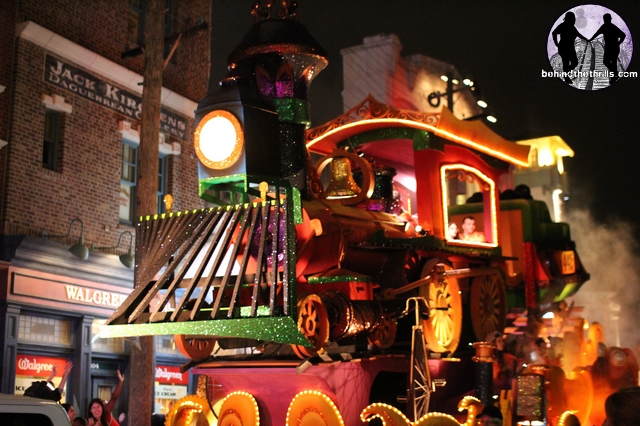 While the food, music and floats are great on their own, it’s best when it call comes together. The Mardi Gras Parade starts at Pantages Theater (Horror Make Up Show) and winds down Hollywood Blvd, up around Despicable Me and down through New York by Mummy, before taking a turn and blasting right by Optimus Prime and Transformers The Ride. We won’t tell you our favorite spot for viewing the parade and catching beads, but make sure to claim your spot early. 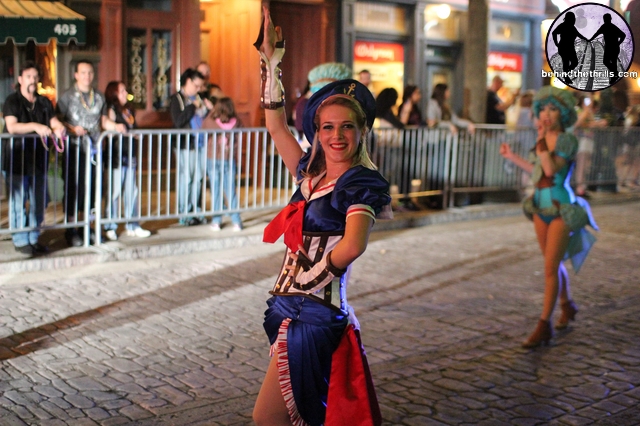 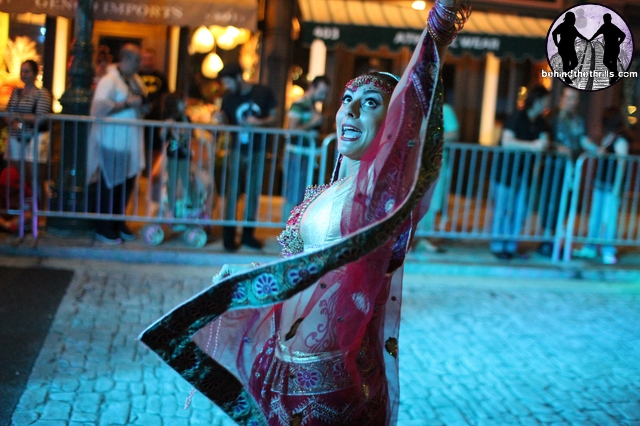 The other big difference this year is the costumes and characters. While in the past the costumes have always been inventive and matched the floats, they were kind of a generic match. You may have birds around the Gator float or forks around the food float. This year, the characters and costumes as much as the floats are all part of the story. The performers bring everything together to make the parade one of the best, if not THE best Mardi Gras parade we’ve ever seen at Universal Orlando.

Mardi Gras also includes a special concert, however, the concerts are subject to change or cancellation. Such was the case with Robin Thicke, who was supposed to perform this past weekend. Instead, the park was kept open an extra hour and a special showing of Universal’s Cinematic Spectacular was performed. Be sure to check here, and the official Universal Facebook Page for any updates on concerts.

Slideshow-Go Behind the scenes of Mardi Gras with hundreds of pictures!