Harry Potter and the Grand Opening at Universal Studios Japan

It’s going to be a very Harry Summer! Universal Studios Japan made a huge announcement yesterday. The second Wizarding World of Harry Potter in the world will open this summer. This comes with the already announced “Summer” date for the second phase of The Wizarding World of Harry Potter:Diagon Alley at Universal Studios Florida. The Wizarding World has been one of the most influential, and profitable theme park properties for Universal and Warner Brothers in the past five years. Grab your broomsticks, your wands, and get ready! 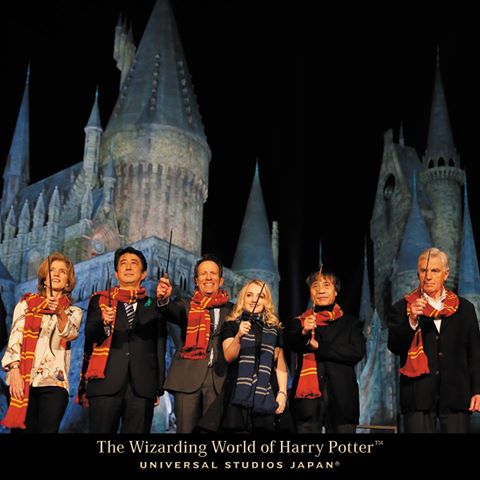 Ivana Lynch, who plays Luna Lovegood in the film series was on hand to help make the announcement. July 15th will be the date that Universal Studios Osaka will open their doors for the second installment of The Wizarding World of Harry Potter.

Unlike the American version, the Japanese version will have 4K projection (we’re hearing complete with 3D glasses). However, the rest of the ride and even the castle should be the same. Guests will be able to roam the halls of Hogwarts and see some of their favorite wizarding friends, including Ron, Harry, and Hermione as well as Dumbledore and yes…the sorting hat.

The new area will also include the Village of Hogsmeade and will have The Three Broomsticks, Ollivander’s Wands and several other shops. Of course there will also be plenty of Butterbeer and Pumpkin Juice to go around! Guests can also learn how to care for a Hippogriff and take a ride on Flight of the Hippogriff. The kids coaster will be a replica of the one at Islands of Adventure in Orlando.

There is no word on what members of the cast will make an appearance when The Wizarding World opens on July 15th, but we’re going to guess you can expect to see Ivana Lynch.

Stay tuned as we learn more about The Wizarding World of Harry Potter at Universal Studios Japan, and be sure to follow along with us on Twitter @BehindThrills for the latest updates!

For more information about The Wizarding World of Harry Potter at Universal Studios Japan, including tickets, visit the official website by clicking here!