The anti-SeaWorld film Blackfish has stirred up loads of controversy over the past few months about the care and welfare of Orcas in captivity. The film tells the story of how a whale in captivity was captured from his mother, abused and driven to the point of murder by his captors. The story has caused waves all over the internet, and the world, prompting several activists to make calls to action. These actions have included boycotting SeaWorld, boycotting corporate sponsors of SeaWorld, and boycotting bands who had scheduled performances at SeaWorld. They have not had the desired effect. Instead of sitting idly by, SeaWorld has fought back, pushing their original message of conservation and education through entertainment, and connecting with the world around us. Now SeaWorld invites you to not only learn the truth, but to stand by them and help spread the word of the importance of SeaWorld’s programs. 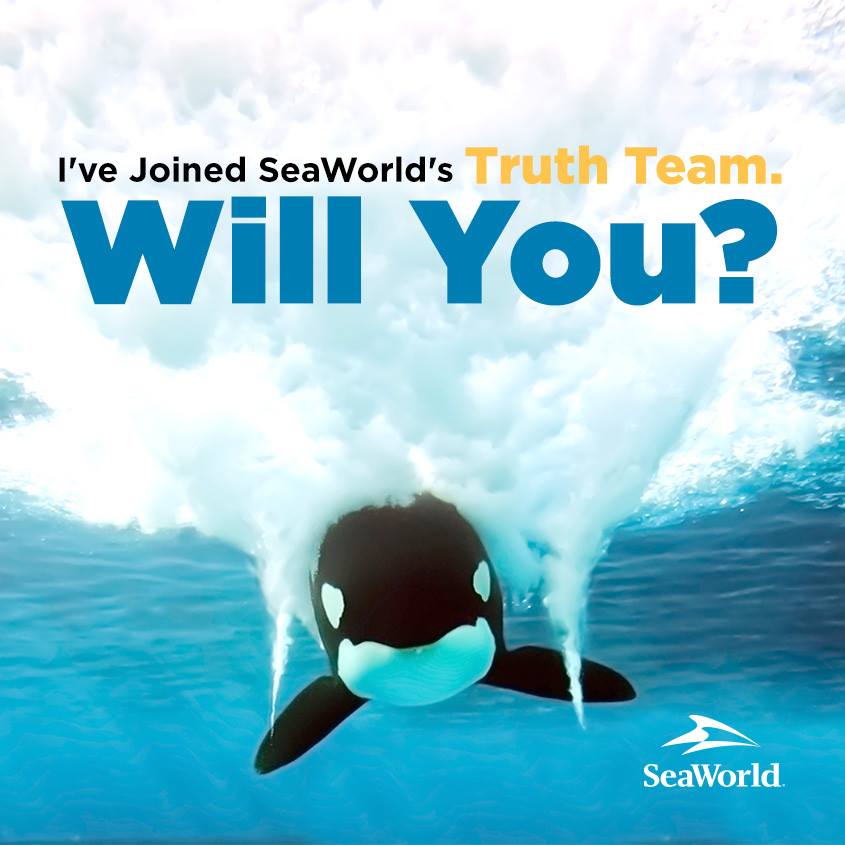 All SeaWorld parks have launched their all new “Truth Team”, a program aimed at not only spreading the word about SeaWorld, but also educating the public about the programs that SeaWorld offers to guests and the ways they help and care for not only the animals they have in captivity, but also the rescue and rehabilitation efforts of animals all over the world.

Why is learning the truth so important?

There are many who believe that everything SeaWorld says is nothing but a bunch of well crafted lies. Let’s for argument sake say that they are lying, they are very naughty people who only care about profit. (That IS NOT THE CASE, but we’ll pretend to prove the point). If SeaWorld WAS only interested in profit, they still have 67,000 animals in their care. The park works with top researchers in the industry to help provide the best care for their animals. If you have sick and unhealthy animals, people will be able to see that, and will stop attending your park. The chain has also rescued, rehabilitated, and when possible released 23,000 animals that needed care. Why would a park only interested in profit do that?

Truth is that it takes a lot of money, time and effort to rescue and care for the animals they help. The ultimate goal is to release the animals back into the wild, but that is not entirely their call. Once an animal is rescued, several government agencies get involved. It’s their call on whether or not the animal is fit to return to the wild successfully, or if they should be kept under supervision for the rest of their lives. Once that decision is made, then another decision is made as to what facility would be best for the animal. Sometimes that facility is SeaWorld, other times, it’s not.

As for the Orcas? Let’s look at the facts here. Most activists will call for the animals to be returned to the wild. While that’s a noble cause, you have to really sit and think on it. Is it really a good idea? Sure, they released Keiko (from Free Willy and the whale on the posters and covers for Blackfish) and while many will say that it was a success, that whale only lived another five years after his release. The activists, and Blackfish, will tell you that the animals live up to 75 years in the wild. So how is five years a success? It’s a very expensive undertaking that is stressful on the animals, and has not had success (click here to learn more about that story).

Video-SeaWorld Trainer talks about Orcas in captivity and Blackfish

The other fact that people seem to miss, is that there are only five whales at SeaWorld parks that were born in the wild. Corky, Kasatka, Katina, Tilikum, and Ulises are the only whales in captivity at SeaWorld parks that were born in the wild. SeaWorld has not captured animals in more than 30 years, and the two they have in captivity were not captured, but rescued from other parks. All of the other whales that are at SeaWorld were born there. SeaWorld does not rip those whales from their families, but they keep them together. There are currently several generations of whales from the same family at SeaWorld Orlando. All of those whales needing care from the trainers and staff at the parks.

While Blackfish isn’t having an effect on bands playing their events, or attendance, (while several bands cancelled, they were replaced with larger names, and attendance has never been higher) it is starting to have a negative effect on politics, which as we all know can go down a very dangerous road for all involved.

There is a proposal in California for a law that would ban Orcas in captivity for entertainment. While the definition of the real reason SeaWorld has Orcas in captivity is debatable (some say entertainment, while others say education), what is clear is that the law would in essence make it illegal for SeaWorld to have Orcas, and would seek to “rehabilitate and reintroduce the animals to the wild”. While that sounds like a noble cause, once again it’s inspired by…you guessed it. Blackfish. The film filled with misleading information is now going to the forum known for the same tactics. It’s a dangerous path, because like Keiko, there is no guaranteed success and could ultimately lead to the death of animals needlessly that are being taken care of.

Here are facts about the bill that you should know:

It’s also worth noting that Assemblyman Richard Bloom is up for re-election in 2014. Could this be a way for him to gain sympathy and votes by pushing a hot button topic? We think so. A politician using smoke and mirrors to gain votes? Say it ain’t so!

It’s more important than ever to learn the truth, and learn what SeaWorld actually does. While the truth is out there, and there are documents and research to back everything up, “copy and paste” activists are using social media to further the message of misinformation by simply copying what others are saying, trying to get people to buy into the rhetoric. If you dare to take a stance against them, you are labelled wrong and are “the enemy”. Case in point, we published this article Saturday afternoon…not once did we use social media to promote it, mention it or encourage it. It’s become the top read article on our site for the week, due to the constant sharing and retweeting by Blackfish supporters. Thanks for spreading the good word, and the truth.

Fact is, we learn about animal behavior from animals in captivity…whether it be in zoos, aquariums or SeaWorld. We have learned more about our oceans, and the animals that inhabit them in the past 50 years by watching them up close, than ever before. The fact that we are entertained is merely a way for the general public to take a message with them. Instead of boring lectures about the behaviors of these magnificent creatures, we ask these magnificent animals to show you…and they do in such a way that you don’t soon forget it. Want proof? Up until 2013, people saw the people who protest SeaWorld as only relegated to PETA and “whackos”. Enter a Hollywood film, made for profit by the filmmakers, and sold to a “news” network for higher ratings and suddenly everyone cares about it. They package their agenda in a gut-wrenching tale, filled with inaccuracies, statements made out of context and flat out lies. They use the tragic accidental death of a wonderful person as the catalyst for that agenda, and put a voice on something that is “cute” that their target demographic will sympathize with. Never mind that everyone involved has either an ax to grind (as ex-employees often do) or has an agenda…that’s not important, but what is important is the perceived anguish that these animals go through.

If we haven’t driven the point home about just how this type of activism really hurts more than helps, then let our friends Penn&Teller tell you a story.

Video-Penn&Teller:Talk about animal activists and hypocrites…not safe for work, children or anyone who is offended

Update
SeaWorld has released 69 more reasons why Blackfish is full of it. In this pdf file SeaWorld breaks down exactly what Blackfish has lied about. They also provide proof. All of this is stuff that is easily researched, and easily found. Editing does wonders. One of my favorites is the fact that the whale they use on the poster and DVD case is meant to make you think it’s Tilikum. It’s not, it’s Keiko from Free Willy. Click here to download the full pdf.

Join SeaWorld’s “Truth Team” and take to social media to show that you support SeaWorld and the good that they do, by clicking here!