Stephen King is arguably the Master of Horror Literature. He’s is a legend living in our time that other writers will strive to be, and professors will make students learn about in American Lit classes when he finally goes. The man has a direct line to many of the things that make us jump, lose sleep and just check under the bed. His very first published book, Carrie, celebrated 40 years of publication on April 5th. Around the same time, we passed what haunt fans call “OH DEAR GOD ARE WE THERE YET?!?” otherwise known as the halfway mark to haunt season. We take a look at the career and works of Stephen King, what we would like to see at Halloween Horror Nights based off of his works, and why we probably never will. Bare with me kids…it’s going to be a winding road. 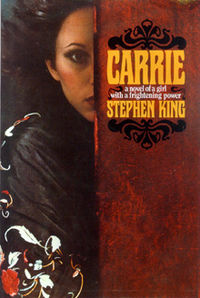 The book Carrie was first published on April 5th, 1974. It was the first in a long line of novels that would take us to the deepest recesses of the mind, and find out what lived in the shadows of it. Carrie was later developed into the Brian De Palma masterpiece starring Sissy Spacek. It was the first of more than 100 (and counting) TV and film productions that was produced based on the published works of Stephen King, or written specifically for the screen by King.

There is 64 published books by Stephen King, some of them with upwards of 20 different stories. Some of the films that were based off of Stephen King stories aren’t horror. Stand By Me, The Shawshank Redemption, and The Green Mile are all critically acclaimed…both in film and literature.

Carrie reminded all of us what it’s like to be that awkward teenager, and what happens when you push people too far. It’s the perfect catalyst for today where kids are bullied and lashing out because of it, either harming themselves or others. It’s an eerie look at the world that kids have to grow up in…albeit dated a bit.

As mentioned above, we have JUST crossed the halfway mark until the beginning of Haunt Season, the time of year where theme parks and stand alone haunts come alive and scare the living hell out of unsuspecting (actually fully suspecting) guests. Specifically we are counting down until Halloween Horror Nights at Universal Orlando kicks off. For the uninitiated, Halloween Horror Nights at Universal Orlando is one of the biggest and most elaborate haunted events in the country. It’s been happening for about 24 years, just a few years less than Knott’s Scary Farm. 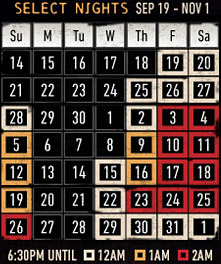 In a bit of HHN News The official Halloween Horror Nights website (click here) has released their official calendar, with the actual days and times of the event. Looks like we get 10 days of 2a.m. closings through the run, with three Wednesdays.

It’s been a rumor for YEARS that the creative minds at Universal wanted to build an entire event around the works of Stephen King. Seems logical, right? After all the man is responsible for half of the nightmares that have been floating around the atmosphere. Again, we stress this only a RUMOR…and not sure if it’s actually been talked about. The rumors go that while King entertained the idea of an event, he wanted everything based around book versions of his stories. Horror Nights wanted to mix the book versions with the film versions. Most of the films that have come out using the Stephen King name…well let’s face it, they haven’t translated well, for whatever reason.

Take a look at the extensive list of stories, novels, comics and screenplays the man has written (click here) and you’ll find a huge list of things that just might not work. While there are many haunts that would love to bring the stories of Stephen King to life, Universal Orlando and Hollywood does it like no one else. The biggest problem with King’s stories, from a haunted attraction standpoint, is the same problem with his movies…bringing them to life on screen and in a park isn’t the same as bringing them to life in your head. There are little details that are missed, and things that you read in the books, just don’t come out looking or feeling right in film and in real life.

Let me paint a picture to prove the point. In one of King’s many collections of stories, Nightmares&Dreamscapes, there’s a story about a man in an apartment that starts to hear something coming from his bathroom. He goes in to discover that it’s a long ass moving finger that is tapping around like some kind of snake oozing out of the sewer. I read this in my teens, and I swear to god I had the hardest time going to the bathroom in the middle of the night, in fear of the god damn moving finger. I took to using the bathroom outside (we lived in the middle of nowhere, so it was fine) until I saw what real fear looked like in the middle of the night. The whole thing painted an image in my mind that was utterly terrifying. That story was turned into an episode of the series “Monsters” later…and it was the dumbest thing you ever saw. That’s the beauty, and (at the same time) the tragedy of Stephen King stories. They grip you while you’re reading them, but once you see them in physical motion, it takes away from the magic, and you can see the string pulling things along.

Then there’s the struggle between the books and the films. Most notably is The Shining.  The film, directed by the maniacal genius Stanley Kubrick, is completely different than the book. It’s the version that people would want to see, however. The book has a giant croquet mallet…the movie an ax. The book has huge animals that come to life made of hedges, the movie has a hedge maze where the walls change. The book only talks about the little twins, and some of the different people who still haunt the Overlook…the movie shows them, and they are outright scary.Could King be convinced that this would be the version to go with? Not likely. He has publicly said how much he hates the film version of The Shining, though it’s an American horror masterpiece.

This fact alone gives the idea that the stories of Stephen King will never see HHN. Then again, maybe he just hasn’t been convinced.  After all, it took many years for An American Werewolf in London to get made into a house, and to convince the director John Landis it would work…and once it did, Landis was blown away by it.

So, don’t hold your breath.

Still, in the hopes of getting the HHN based on King books, here’s our wishlist of books and stories we’d like to see make it as houses.

Yes, we’ve left obvious choices like IT, Cujo and Pet Semetary out. While those are great stories, it’s almost impossible to translate those into decent houses. The horror is there, but the way to pull them off and keep the maze interesting just doesn’t seem to work.

Again, this isn’t a rumor that anything will happen. It’s a wishlist. What would you like to see at HHN based on Stephen King? Let us know in the comments below, and go into how you would do it! What imagery would you show.

Stephen King continues to write books, stories and screenplays. He is has missed a few times, but hits more than he misses, which is always the thing that matters. He is a master of not only horror writing, but also non-fiction and just good old fashioned story telling.

Here’s hopin the old boy still has more in him.

Stay tuned for more about Halloween Horror Nights, and be sure to follow along with us on Twitter @BehindThrills for the latest information and updates!

Halloween Horror Nights Orlando opens in September and runs until November. For more information about HHN, visit the official website by clicking here!