Universal Studios Hollywood has just launched the all new Despicable Me:Minion Mayhem and Super Silly Fun Land over the weekend (click here to see FULL COVERAGE of the grand opening!), which is the first official kids attraction at the park. That should be enough for the Southern California park for quite a while, right? After all, the park opened a Kong portion of the Studio Tour in 2010, Transformers in 2012, and Despicable Me in 2014. Every two years seems like a great pace to make great attractions, right? Universal Hollywood didn’t think so either, the park is fast tracking some huge new attractions and additions to the park, which will effectively change the entire face of the park by 2016. On top of that the park is rehabbing old attractions and shows, like the recently reopened WaterWorld. We take a look this week at all the construction happening in the park, and take a look at what will be coming soon. 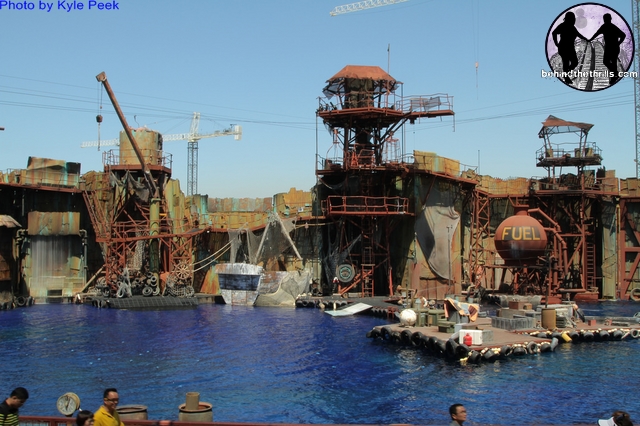 Waterworld has been a staple in the park for the past 19 years, and relatively unchanged in that amount of time. It’s a huge stunt extravaganza, and is based on the box office flop directed by Kevin Costner. While the film may have been a dud, the show is amazing, and is constantly rated as one of the best stunt shows in theme parks. The show went down for a huge refurbishment, mostly because a new production company took over, and is now back with some major changes and a few big surprises.

Video-Check out the all new WaterWorld stunt show

The biggest additions to the show is the changing of the plane crash, a larger cast, and the entire cast having microphones and live speaking lines. Before the supporting characters were all pre-recorded. The show is back to it’s full throttle speed, and despite rumors of it being demolished to make room for The Wizarding World of Harry Potter, it seems to be alive and well for quite some time. 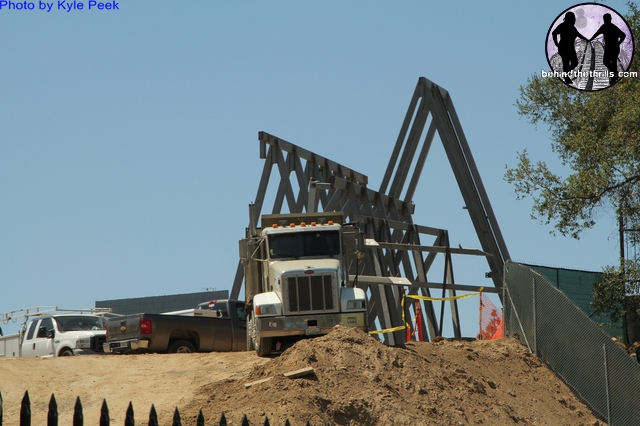 Speaking of The Wizarding World of Harry Potter, last week Universal Studios Hollywood announced that they will be officially opening their version of the attraction in 2016. With that tight span of just two years, it’s no surprise that the park is working virtually non stop to get it ready. The area will be right behind the all new, Springfield which is also fast tracked for next year. Harry Potter is currently getting a ton of steel work done, and new pieces getting put into place. Once that basic ground work is done, the landscape will start changing very rapidly. The all new area is going to feature the Village of Hogsmeade, with Hogwarts Castle looming in the background. The area will also feature the signature attraction-Harry Potter and the Forbidden Journey, as well as Olivanders Wands, and several other attractions. Rumors strongly suggest that the area will also get a copy of the kids coaster-Flight of the Hippogriff, as well as a much larger Hogwarts than it’s Orlando counterpart. This larger castle is to make room for the huge new dining experience that will feature interactive features, very similar to Be Our Guest at Walt Disney World’s Magic Kingdom. This is just a rumor at the moment. 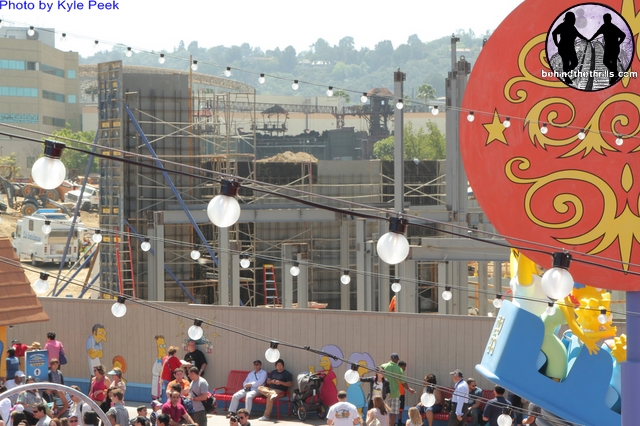 Also announced last week was the addition of Springfield to the area around the Simpson’s Ride. The all new area will feature many restaurants and shops that will be duplicated from the highly successful new area in Orlando, as well as several new shops. The area will not look the same at all, however, as it will feature a much different layout. Construction is well underway, and the area will only continue to change over the next few months.

Slideshow-Check out even more pictures from Universal Studios Hollywood

Can’t view the slideshow? Click here to see all the pictures from this update!