You fools. You wanted more, you begged for more, and Knott’s is going to give it to you. You have no idea what you’ve done. Knott’s Berry Farm has released the dates and info for this year’s Haunt at Knott’s Scary Farm. And by popular demand…she’s baaaaack. 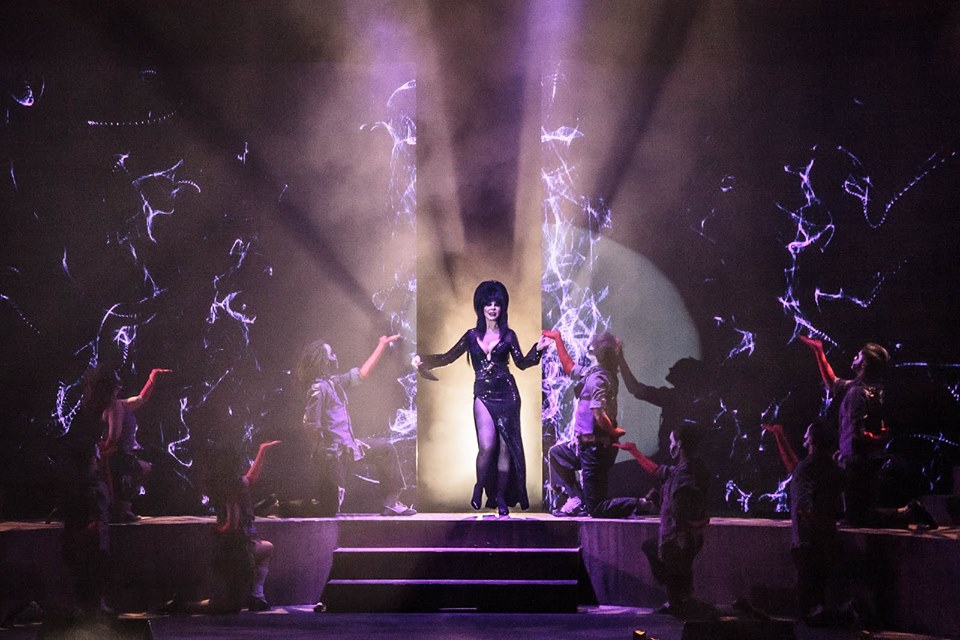 Knott’s Berry Farm has released the schedule for it’s annual Halloween event,  Haunt. Last year the park brought down the house with several new elements,  including Skeleton Key, Fright Lane, and of course a nightly show featuring Elvira, the mistress of the dark.
Fan response was so strong to that show that the park is once again bringing the Queen of the it’s with the nicest set of….spirits back for an all new show in 2014. The park has also released the dates, and a few more tidbits.

Here’s all the details:

–          Back by overwhelming demand,Elvira, the legendary Mistress of the Dark, will headline the 1,800 seatGhoul Time Theater twice nightlythrough the entire run of Scary Farm.  Elvira’s all-new show will feature her signature blend of comedy and sass, along with singing, dancing, and explosive special effects!

–          Also returning in 2014 are the terrifying secrets behind the locked doors in Skeleton Key Rooms.  First introduced in 2013, Fright Lane with Skeleton Key offers front-of-line access to all mazes and unlocks unnerving terrors in exclusive scenes in select mazes.  This year, Knott’s Scary Farm Skeleton Key rooms will be entirely new and more frighteningly interactive than ever.  Also new this year is the collectible keychain that commemorates your harrowing journey through the Skeleton Key rooms (while supplies last).

The park had amazing success with their new mazes, Fast Lane and Skeleton Key. Fans, however, flocked nightly to see the Mistress of the dark in her Hugh energy show that mixed special effects, film and of course…Elvira.

There’s no word on what houses will return, or a line up of new houses. It’s still a tad early,  but we’re sure this year will he even bigger than last.
Video-Get spellbound with the entire walk through of Black Magic

Stay tuned for more Haunted goodness,  and be sure to get social with us on Facebook and follow along with us on Twitter @BehindThrills for the latest updates!
For more information about Knott’s Berry Farm, including tickets, visit the official website by clicking here!

TAGElvira Halloween 2014 Haunt Knotts Scary Farm
Previous PostSeaWorld Orlando kicks off Summer Nights with a splash Next PostHonda owners can get special access to Colossus this Friday, as Six Flags Magic Mountain prepares for it's closure