This past weekend Knott’s Berry Farm opened up two classic attractions with some brand new twists in a morning long media event. This continues a multi-year park wide transformation that started with large refurbishment of the iconic Calico Timber Mountain Log Ride attraction as well as a complete overhaul of the Boardwalk. This year Knott’s set their eyes to yet another classic attraction and land overhaul.

The updated Camp Snoopy features three new rides, Pig Pen’s Mud Buggies, Charlie Brown’s Kite Flyer, and the Linus Launcher. Over a dozen improvements have been made throughout the land, varying from new flat-ride themes to agricultural refreshments.

Also getting a huge refurb is the Grand Scenic Railroad. The railroad also features the Peanuts gang doing what they would typically do while away at Summer Camp. The Camp Snoopy refurbishment is just one of the latest in a series of complete area overhauls that Knott’s is doing to the park. They intend on making each area better by not only restoring them, but also updating them.

Also celebrating a grand re-opening was the classic Calico Mine Ride which has been a staple of Knott’s Berry Farm for over 54 years. The grand opening included a speech from the man behind the refurbishment Garner Holt. Holt’s company was in charge of bringing the animatronics back to life and updated with fresh new looks, while keeping that same classic feel. 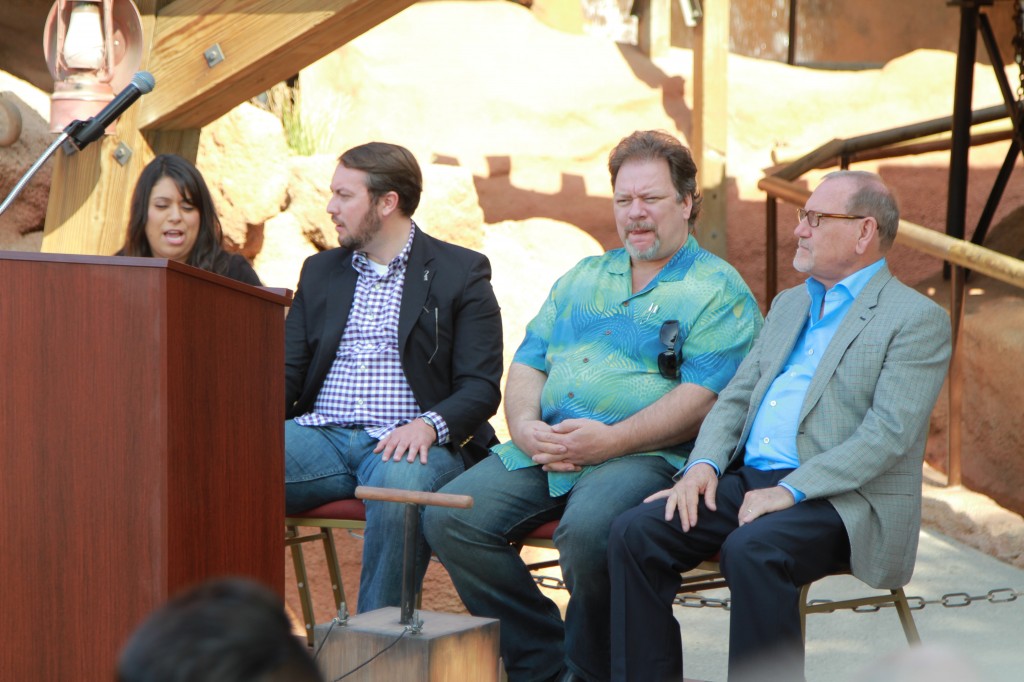 The opening ceremony got a little out of hand as miners decided to storm the stage and take over the festivities. The Calico Mine Train is a scenic tour through the mine that originally opened in 1960. At the time the ride cost over a million dollars to make, but that money was a sound investment, as it was made back in the first year of operation.

Nothing in the mine was left untouched, with every single scene, animatronic and effect getting worked on. Things as simple as fresh paint, and even new sound systems were used to make the Mine Train roar back to life.

All the ride details, and animatronics look amazing and adds a whole new level to the park. While the ride continued to be a favorite, it was certainly starting to show it’s age. After the success of the Timber Mountain Log Ride, the park decided it was time to bring the Mine Train back up to speed.

While the two new areas are great, don’t expect that to be the last of the refurbs. Park GM Raffi Kaprelyan teased that Knott’s would be turning their attention back to the Boardwalk for some cutting edge interactive family fun for 2015. This area of the park is also home to the vacant Kingdom of the Dinosards show-building. While it’s unlikely that Kingdom of the Dinosaurs will return to it’s former glory, the site has been under heavy construction, and it appears that it will be the home of some all new family interactive fun for 2015. After that, it sounds like all eyes could go on Ghost Town with some fun refurbs in mind.
Slideshow-Check out even more pictures from Knott’s Berry Farms!

This is just the start of the season for Knott’s as they roll into summer with a huge new line up. The park still has the massive Haunt coming up this year, and if the past two years have been any indication, we can expect to continue to see a mix of great new attractions with the rich history that Haunt has brought us in the past.

Stay tuned as we bring you even more from Knott’s, and be sure to get social with us on Facebook, and follow along with us on Twitter @BehindThrills for the latest updates!

For more information about Knott’s Berry Farm, including tickets, be sure to visit the official website by clicking here!