It’s getting closer. As the summer heat is turned up, the days continue to get shorter. Fall is coming, which means so is Howl O Scream. The Halloween event at Busch Gardens Tampa, Williamsburg and SeaWorld San Antonio is fat approaching, and while we don’t know a lot of details about this year’s event we do know one thing…the scare is shared. While we aren’t exactly sure what that means, we do know that no matter what you see, no matter what you hear…Don’t Listen. 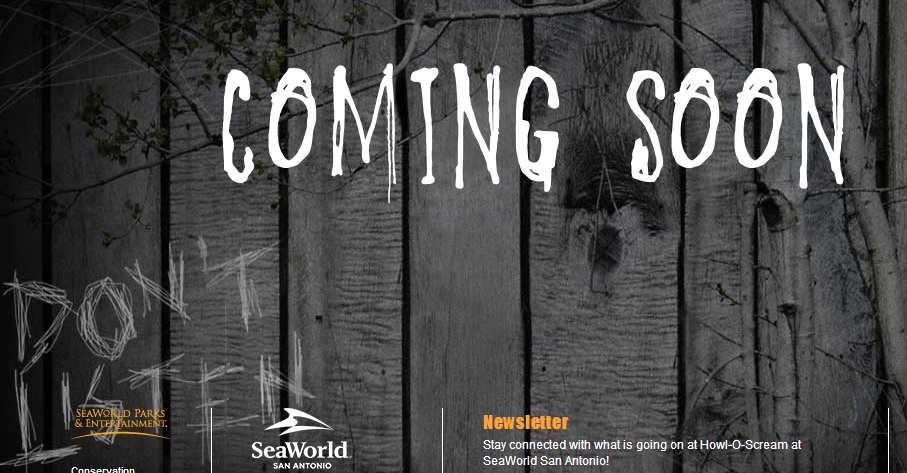 As we predicted a few weeks ago, the official Howl O Scream website of all three parks-Busch Gardens Tampa, Williamsburg and SeaWorld San Antonio have been updated to reflect the same theme at all three parks. The theme isn’t exactly clear, but we are shown a wooden fence, with some kind of trees in the background. On two of the websites we see scrawled on the side “Don’t Listen”. That looks like it could be the theme to this year’s event, with something calling to us from beyond the fence and the woods. Maybe there’s something in our own backyard, calling out to us in the night? Perhaps it’s some kind of demented siren, tempting us into the darkness? We’re not sure, but whatever it is, it looks like guests will have their share of the scare at all three Howl O Scream events.

The other thing that we know are two of the three event dates, thanks to the official Howl O Scream websites.

Last year’s Howl O Scream event ran from September 26th until October 26th, and included “The 13”. The 13 were a group of sinister people from all over time that came out once every 100 years, on the 13th year.

Last year was actually Howl O Scream Tampa’s 14th year, so we wonder if this year will be something special for the 15th year anniversary. More information here.

Stay tuned as we bring you even more from Howl O Scream, and be sure to get social with us on Facebook, and follow along with us on Twitter @BehindThrills for the latest updates!