Tropical Storm Arthur is churning in the Atlantic and it could effect Central Florida as early as Wednesday, with other states along the East Coast feeling it’s effects later in the week. It’s the very first storm, of what many forecasters are calling a busy season. If you have any theme park vacation plans, you may be starting to think your vacation could be a wash out. But is a tropical storm or hurricane really enough to cancel your theme park plans? We answer your questions and give you some tips on what to expect. 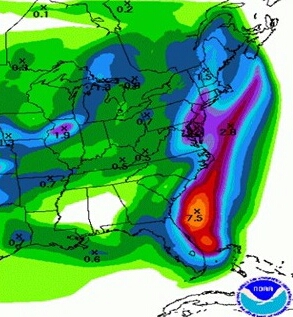 Hurricane season starts June 1st and goes all the way to November 30th. While hurricanes and storms this early in the season are uncommon, they do happen from time to time. If your summer plans include a theme park vacation to Florida, and a Tropical Storm or a hurricane pops up, don’t panic or cancel your plans. You may be able to take advantage of those who do panic, and use the weather to your advantage.
While all theme parks take their guests and employee safety very seriously, the majority of all storms that affect the Orlando area theme parks are mostly rain with a few gusts of strong winds. Because of that, most theme parks remain open. While it’s not uncommon for some parks to close early due to expected low attendance, the big three-Disney, Universal amd SeaWorld will usually keep their normal operating hours. Waterparks, however usually always close as sometimes heavy thunderstorms can be expected.

Tropical Storm Arthur is expected to start affecting Florida as soon as Tuesday,  which means a lot of scattered showers. Just because there’s a storm with rain, doesn’t mean that you still can’t have fun.
There are two main types of tropical systems to be aware of.  Hurricanes and Tropical Storms. There are also Tropical waves, depressions and smoothies….but smoothies can be delicious, while waves and depressions just bring rain. Tropical storms can pack winds up to 74 miles per hour. Anything after 74 is upgraded to a hurricane. When you have a hurricane, it’s best to pay attention to the forecast track and see if it’s headed to the area if your vacation destination. The same for tropical storms. While a storm is no reason to cancel a vacation, you don’t want to be caught in an area that could be directly hit by a storm.
Now if you’re thinking that a tropical storm or heavy rainstorm is a reason to stay away from a park or cancel your theme park trips all together you might want to reconsider. Like we said before, if your area will be directly affected by a storm, seek shelter and wait until it passes.
However, right after and during wet weather is probably the best time to enjoy theme parks if you don’t mind being damp all day. Again, we don’t recommend going out in high winds, lightning and other dangerous situations, but if a theme park remains open, it’s a safe bet that things aren’t going to be dangerous.
Here’s some tips on how you can enjoy parks in the rain:

Take a poncho-Poncho’s are full body raincoats. They keep the majority of your clothes dry and you can take them on rides
Wear flip flops or sandals-If you wear sneakers, or closed toe shoes, expect to walk around with wet feet all day which can cause blisters and sore feet.
Ride closures-Some rides may be down due to lightning and strong winds. Check signs at the front of the park before making plans. Coasters generally tend to stop operation if lightning is within 30 miles of a park, and the rule of thumb is that you should remain indoors for 30 minutes after the last lightning flash
Shows and indoor attractions-Parks like Magic Kingdom, and Universal Studios have a huge array of shows, and indoor rides. Head to those parks, and wait for the shows. Check out shows and indoor rides that you normally wouldn’t and use the time to reride attractions indoors that you enjoyed.
Eat often-Find a nice restaurant to settle down in and wait out the storm. Use the time to explore new eateries.
Characters and parades-A lot of Central Florida parks have character meet and greets and parades. During torrential downpours a lot of outdoor shows, parades and characters will becancelled. Look for characters meeting guests indoors in spots where they normally aren’t.
Watch the feeder bands-Feeder bands are the strips of storms that swirl around the center of a storm. They will provide a few minutes of drenching rain, wind and possible lightning, but will also give you breaks inbetween. Use the time in between to go to your next destination or catch a ride that may temporarily reopen.
Be safe-Take your time in the rain. Watch for slick surfaces and just enjoy the light crowds! If things get too bad, leave and come back later.
Enjoy your hotel-Hotels in vacation areas usually have a lot to offer. Instead of using it as just a place to crash, during wet weather check out some of the things that the hotel offers like the pool, gaming areas and special programs.
Theme parks will close their gates for the day if it looks like a total wash out, and if situations get too dangerous.  The best way to keep track of the latest updates is through the official Facebook and Twitter accounts.  Many times a park will announce shortened hours, or closings on social media before they update a website.
Currently there are no parks affected by Arthur,  but that may change. Stay tuned as we bring you any updates on theme park operations while the storm is in the area.
Be sure to get social with us on Facebook and follow along with us on Twitter @BehindThrills for the latest updates!