For the first time in forever, there was snow and ice in Orlando this past weekend! While winter time is the time to cuddle, usually in summer snow is…not a happy snowman, but at Disney’s Hollywood Studios the park was home to an icy good time. Olaf, Kristoff, Elsa, Anna and all their friends took over the park as Frozen Summer Live began Saturday. The all new summer time event was just announced a few short weeks ago, and it created a massive buzz among Disney fans and fans of the hit animated film, Frozen. 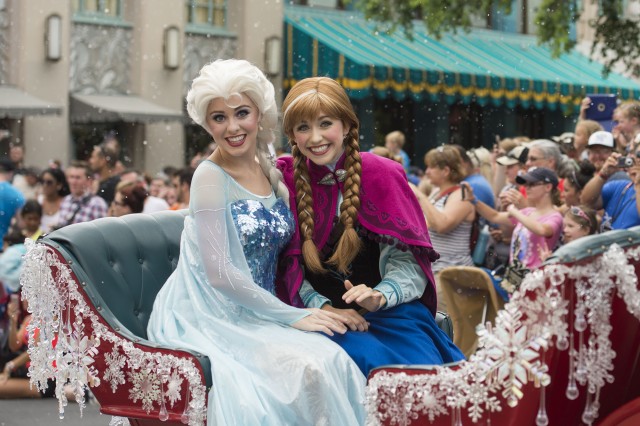 Frozen has been a worldwide phenomenon since it’s debut in theaters last year. Since then, Disney has slowly realized that potential in park with several smaller incarnations. Frozen Summer Live takes all of those previous versions and combines them in a huge daily celebration. The party all begins when Anna and Elsa arrive in style in a Royal Welcome down Hollywood Boulevard. The other characters of the film come to life as well, as singers and dancers accompany them. 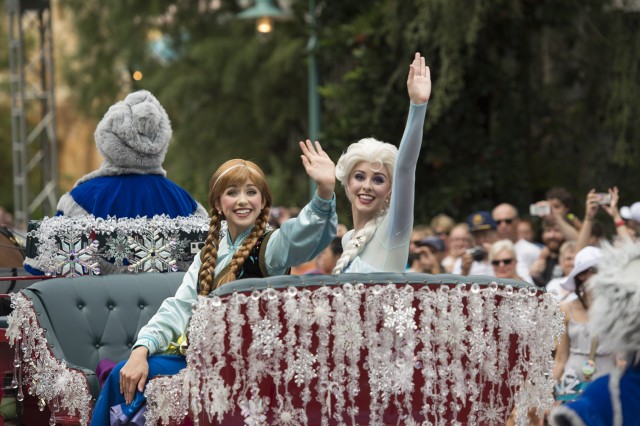 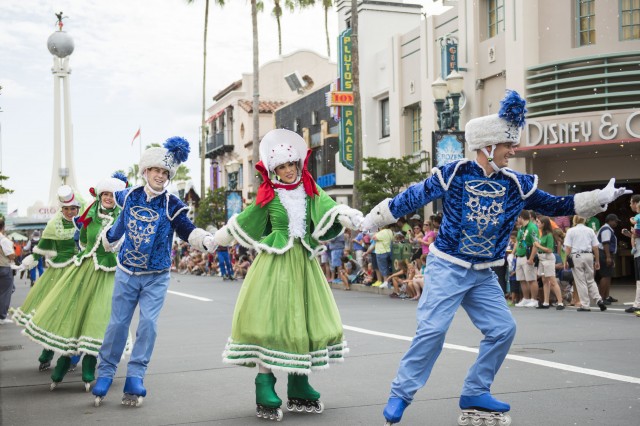 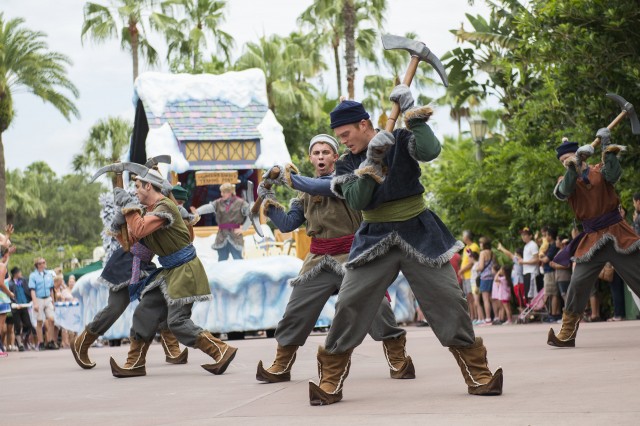 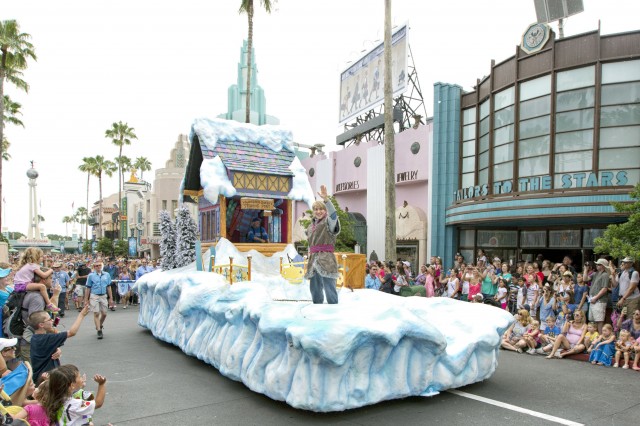 Guests become honorary citizens of Arendelle with the “First time in Forever” Sing along. It’s a fun 20 minute show that brings together special effects, music and the fun of the film in a very fun atmosphere.

Here’s the other great things that Frozen Summer has to offer:

Wandering Oaken’s Trading Post & Frozen Funland: There’s a “big summer blowout” happening inside the park’s Soundstage One, where Oaken – the film’s trading post owner – and his cousins have created the “Frozen Funland” amidst a winter wonderland.  Living up to its name, there will be plenty of frozen festivities inside the makeshift adventure park Oaken and his cousins built to make the most of the sudden snowstorm.

Part of the Oaken’s Frozen Funland will be an ice skating rink with demonstrations by some of Oaken’s talented cousins on the Arendelle ice. Daily ice skating sessions also will be available to guests to purchase. The cost is $10 for 30 minutes of fun on the ice, and includes the use of ice skates, socks and a helmet.* Skating sessions are available on a first come, first serve basis each day from park open to 8 p.m.**

Kids can enjoy frozen wintertime activities in the “Do You Want to Build a Snowman?” area.  For all of his Frozen Funland friends, Oaken has plenty of merchandise at his Trading Post, along with hot cocoa and sweet treats available for purchase.

Guests can take pictures with the film’s animated characters in a virtual setting, and then email them or share on their social media channels.

When guests want to escape the icy atmosphere of Oaken’s outpost, all they have to do is look for the door marked “Sauna,” where they once again will exit to the warm Florida sun.

Coolest Summer Ever Dance Party: From 5:30-9:30 p.m. each evening, a live band will take the stage to celebrate the Frozen summer fun with contemporary songs and a few familiar tunes from the film.

Take-Along Olaf: As a special feature before the fireworks, guests will have a chance to be a part of a pre-show celebration by hashtagging photos of themselves in the park with a “Take-Along Olaf.”  Throughout the day, Take-Along Olafs will be distributed at various locations in the park.  Guests are then invited to take Olaf along with them on their Disney’s Hollywood Studios adventures.  By sharing their photos with the unique hashtag #OlafSummerVacation, their photos may appear on the big screen in this special pre-show feature.

Frozen Fireworks: At 9:45 each evening, the giant Sorcerer Mickey Hat on Hollywood Blvd. gets the full Frozen treatment with special projections of snow and ice images, in an eye-popping spectacular above Hollywood Blvd.  Set to the film’s soundtrack, the fireworks show will feature some special guests – including a very magical appearance from Elsa in which she will show how her powers flurry “through the air and to the ground” to produce magically icy blue and white gleaming fireworks.

The overall atmosphere is a ton of fun, though we’ve heard many complaints about the ice skating, and how the wait is insane. Our suggestion is to reserve your time for later in the day, and just come back. The big hit is of course, Wandering Oakens which has ice skating and snow. It’s a blast on a hot Florida summer day, and everyone lines up for it. That should be your first stop.

Of course, if you want to get closer with the fun, there’s the The Frozen Summer Fun Premium Package, which offers guests reserved viewing for three of the new experiences: Anna & Elsa’s Royal Welcome procession, a showing of For the First Time in Forever: A Frozen Sing-Along Celebration and an exclusive dessert party in  a reserved area for viewing of the nighttime Frozen Fireworks. Packages cost $59 for adults and $34 for children (including tax and gratuity) and guests can book the package by calling 407-939-1939.

So, what do you say…do ya wanna build a snowman?
Update
As predicted, Disney has extended Frozen Summer. The daily Frozen fun will now run until September 28th. The program has proven to be a huge draw for Disney’s Hollywood Studios, so it really comes as no surprise. It’s rumored that Frozen will take over Epcot’s Norway attraction, Maelstrom. That attraction is rumored to close on September 28th, the same day that Frozen will end it’s run at Hollywood Studios. Perhaps we will get an official announcement that same day about the future of Frozen AT Disney.
Stay tuned for more from Walt Disney World, and be sure to get social with us on Facebook, and follow along with us on Twitter @BehindThrills for the latest updates!

For more information about Frozen Summer, including tickets, visit the official website by clicking here!