Disney has a money printing machine, more so than it already did. Frozen is the number one animated film of all time, and merchandise sales are getting close to passing the number one merchandise property-Pixar’s Cars. Frozen is absolutely everywhere, and Disney quite frankly likes it that way. The movie is about to explode even more with many new projects, sequels and yes…even theme park rides. 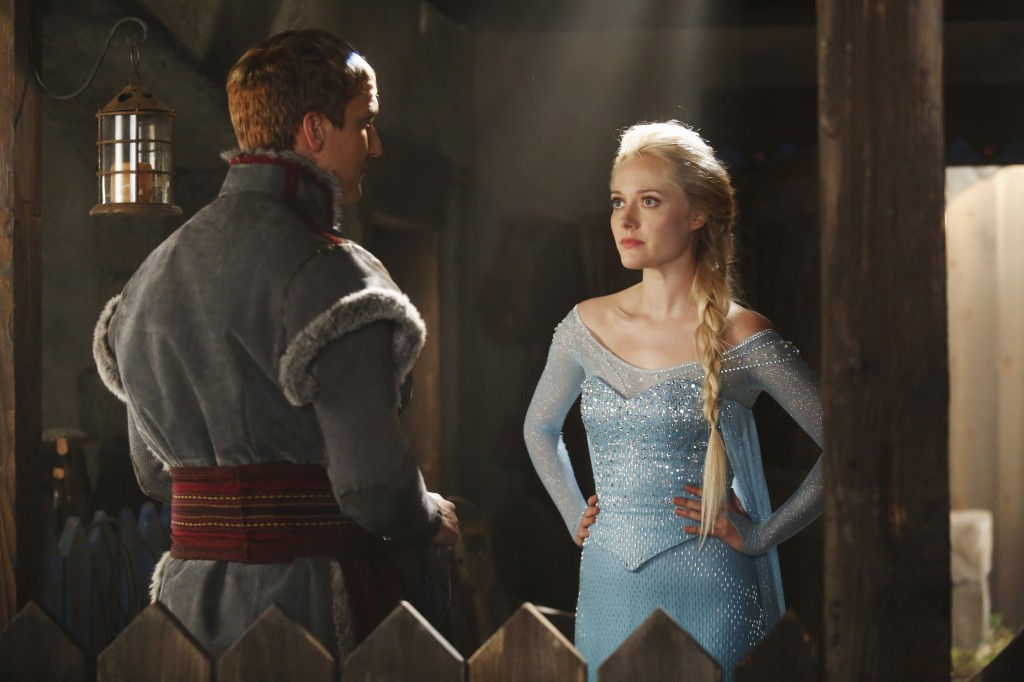 Time has the first image of Queen Elsa on the set of ABC’s Once Upon a Time. The TV show that takes fairy tales, and strands them in the real world, will feature the characters of Frozen on this season’s episodes. It’s the first step in Frozen’s domination.

The trailer for the fourth season of Once Upon A Time premiered at San Diego Comic Con on Saturday, and features not only The Wicked Witch, and many other fairy tales…but also the threat of being…Frozen.

But Once Upon a Time isn’t the only thing that’s Frozen. Earlier this year the Princess duo of Anna and Elsa premiered at Epcot’s Norway pavilion to rather large lines. Needing a more “magical” place to reside, the princesses were invited to Princess Fairy Tale Hall as a guest of Cinderella in the New Fantasyland.

There the princesses commanded waits of 3 hours. The Fastpass Plus system is booked solid for those planning trips, almost as soon as the tickets become available. This resulted in the park having to completely revamp how they allowed guests to experience the princesses. Now, once the line reaches the 30 minute point (which it does within five minutes of park opening) return tickets are given. Guests are given tickets with a specific time to come back. Sounds just like Fastpass, right? Well, this is just  ticket to get in line. Past that time, guests are expected to wait about 30 minutes, but the lines have been more around 45 minutes. The princesses are so popular that just to take a picture with them will have most people waiting most of their day.

The princesses even have their own float in the all new Festival of Fantasy Parade, which is a huge hit with fans, large and small.

With the threat of Diagon Alley stealing some of Disney’s thunder, Hollywood Studios rolled out “Frozen Summer”, which is a whole day full of Frozen fun. The event is daily, and includes a princess welcome parade, with all the characters from the film. A welcome stage show, where the characters greet the crowd with Olaf. There’s also a sing along party which gives guests something to sing about as they sing along with the characters of Frozen. There’s also wandering Oakens Trading Post with Frozen merchandise, and ice skating. It’s been wildly popular, and allegedly only assembled in less than two weeks.

The program happens every single day, and every single day guests pack the park to get their fill of Olaf, Anna and Elsa. The show is so popular that there is rumor of expanding the show after American Idol closes to that theater, and extending the Frozen Summer later into the year, right up until Christmas. Then the rumor mill says that there will be a Christmas version of the program as well, that will go along with the annual “Osborne Family Dancing Lights” at Christmas. Even though the film doesn’t happen anywhere near Christmas, nothing says the holiday season like ice and snow!

Frozen takes place, loosely, in Norway or some other Scandinavian country. You can tell because the characters say “Fjords” instead of river, and Oaken talks with a kind of Norway-ish accent. Seriously, that is what makes the film take place in Norway. So, naturally, Disney wants to turn their Norway attraction into Frozen. Great idea, right?

Norway doesn’t think so. In fact, the entire country doesn’t want it to happen so much that they are actively seeking ways to keep Disney from doing it. They apparently like their representation of vikings, trolls and industry. So do we, honestly.

Disney wants the government of Norway to throw about $9 million dollars at Disney to update the attraction, and keep it away from Frozen as much as possible. The area already suffered a little bit of a hit when the viking museum that had really cool viking displays turn into a history of the fictional kingdom of Arendale. While that’s great for Disney, it really spells disaster for Norway. After about 25 years, no update to the ride has it feeling a little old, with effects being very outdated.

The Frozen attraction would see the world of Frozen come to life, and rumor has it that it could happen as early as this fall.

Frozen has made it’s mark on Disneyland as well, with a Frozen pre-parade party, as well as a Princess meet and greet. Guests, like in Orlando, have lined up for hours to get their pictures taken. Granted, the lines aren’t as insane as Orlando’s but it’s a pretty long wait regardless.

Besides the parks, there are more plans for Frozen sequels, and even a Broadway show. The soundtrack topped the Billboard charts 13 times, which is great for anyone, but insane for a soundtrack.

The demand for the property is still there, and no matter what Disney does, there will be a huge market for it for years to come.

So what do you think? Are you ready for more Frozen fun, or is it time to let it go?

Stay tuned as we bring you more Frozen Fun, and be sure to get social with us on Facebook, and follow along with us on Twitter @BehindThrills for the latest updates!