iCarly fans might have been saying “What the shiz?” as they made the run through Diagon Alley on Monday, as star of the show, and it’s spin off-Sam&Cat was spotted at Universal Orlando. Jeanette McCurdy, best known as Sam from iCarly, was in Diagon Alley to not only ride the amazing new attraction, but also experience the rest of the area. 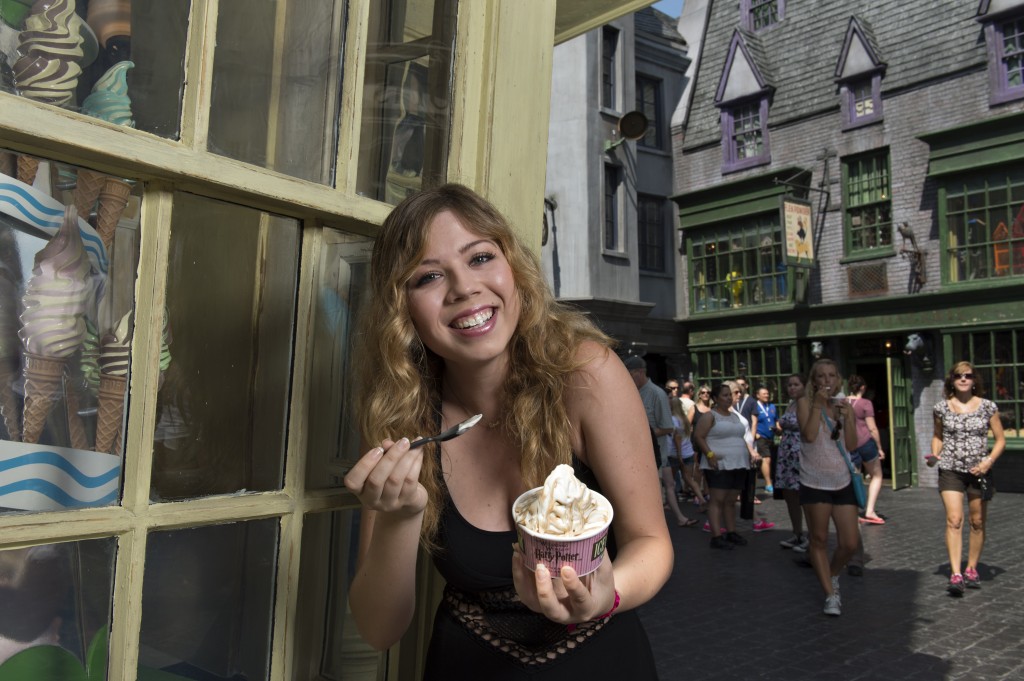 Diagon Alley opened earlier this month at Universal Studios Florida, and has wowed guests as they walked through the wall. While most have been anxious to try the amazing new “Escape from Gringotts”, the real attractions are the shops themselves. With so much to do in Diagon Alley, from casting spells, to getting a bite at The Leaky Cauldron, to even beating the heat with Butterbeer Ice Cream, there’s hardly enough time for it all in one day.  Jeanette survived the dragon in Gringotts, but the real treat was the ice cream.

Diagon Alley is truly an immersive experience, plunging you into the Wizarding World of Harry Potter like never before. Once guests walk through the walls, no other part of Universal can be seen at all! The shops themselves are a unique experience, as so much comes to life with the flick of a wand.

Also new is the Hogwarts Express, which takes guests from London at Universal Studios Florida all the way to Hogsmeade Station at Universal’s Islands of Adventure next door.

Stay tuned as we bring you even more from Diagon Alley and Universal Orlando. Be sure to get social with us on Facebook, and be sure to follow along with us on Twitter @BehindThrills for the latest updates!

For more information about Universal Orlando, including tickets to Diagon Alley, visit the official website by clicking here!