It’s Halloween Horror Nights,  everyone’s entitled to one good scare. What form will that scare take this year at Universal Orlando? It looks as if we don’t have to wait too long,  as the official Universal Orlando Halloween Horror Nights Facebook page has started teasing that a new house will be announced tonight. No witching hour, no staying up to greet the sun, no..m this time Universal will unveil the Terror at 11p.m. EST. Are you ready to look terror in the face? 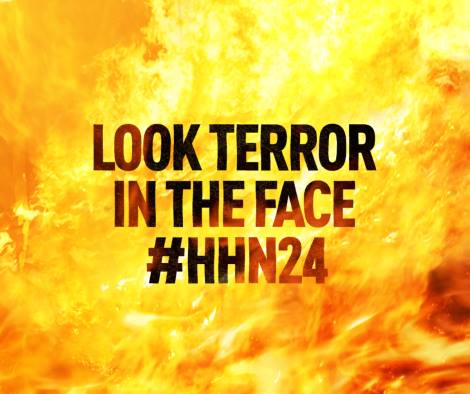 So far we already know there will be eight houses. We also know that The Walking Dead will return for the third time to HHN. We also know that the El Rey series From Dusk Till Dawn will also make up an all new house. So who exactly will we look in the face when Universal pulls back the mask on this all new house?
Rumors have swirled since April about many different things coming to Halloween Horror Night at Universal Orlando this year. Different movies, different ideas. No one is quite sure what will be revealed,  but be careful when you look into the eyes of whatever it is…its sure to be pure evil.
The announcements are likely to trickle in between now and mid August as Universal readies for this year’s event. In previous years Universal has made one giant announcement about a month before th we event.  Last year they changed things up a bit by slowly revealing the houses during a huge week.
The event runs from September 19th until November 1st on select nights. The event is not recommended for those under 13, and is a separate ticket event.

Stay tuned for more from Halloween Horror Nights at Universal Orlando, and be sure to get social with us on Facebook and follow along with us on Twitter @BehindThrills for the latest updates!