Busch Gardens Williamsburg is prepping for a massive new attraction in 2015. The new attraction is said to be a unique coaster for the park, and will allegedly go in the Festa/Italia section of the park near Apollo’s Chariot. Today we have a look at what the possible new coaster would look like, and while it’s very small, it looks to pack a punch. 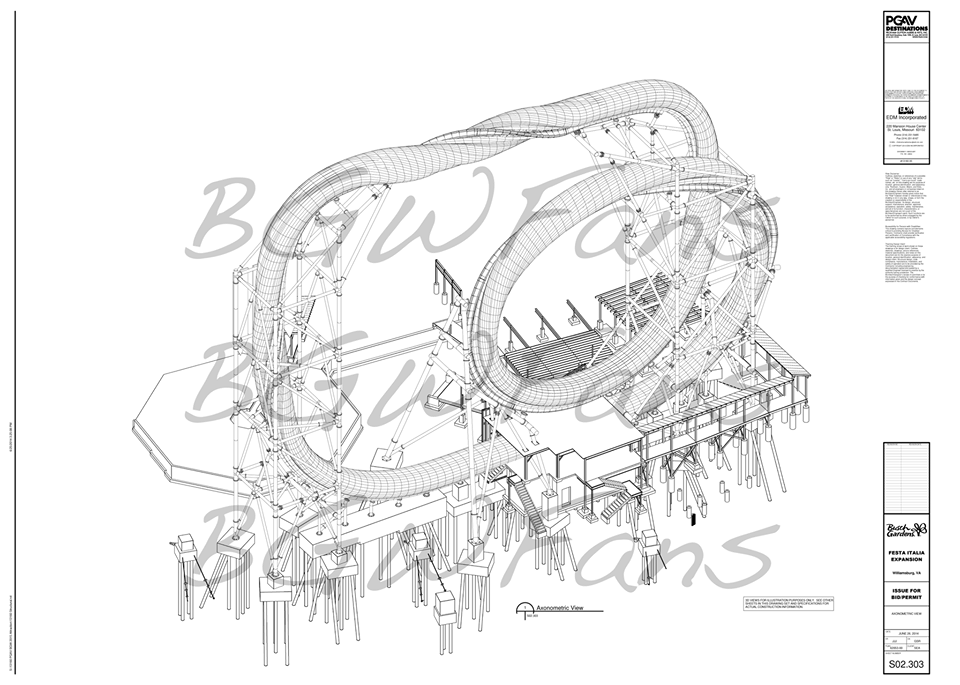 Keep in mind that this is all rumor and speculation, and until Busch Gardens Williamsburg announces it, this is not really happening.

The photo above, unearthed by fansite BGW Fans shows off essentially a shuttle loop coaster, that many are calling a replica of Superman:Ultimate Flight at Six Flags Discovery Kingdom. The new coaster will have a height of 156 feet tall, and will include a launch, into a massive inline twist and go into a huge loop before pulling back into the station. If you’re wondering what the “tubing” around the track is, that is merely a representation of the enveloping around the track. Enveloping is the area that must stay clear around the track.

The name of this new coaster could be Tempesto, which means Storm in Italian. The name fits, but could this really be it? The design has a notoriously low hourly capacity, and with a larger park like Busch Gardens, this could become a nightmare on a busy day.

The park’s last coaster, Verbolten, opened in 2012 and retraces the legendary path of The Big Bad Wolf. It is a family style coaster, and has no inversions at all. While this is a true thrill machine, is it the right fit for such a huge park?
Update
Our sources indicate that there could possibly be a story element added to the coaster, or at the very least a separate load/unload station. That would increase the capacity quite a bit if there were more than one train being loaded at a time. The current coaster at Six Flags Discovery Kingdom has one train with two cars, each car holding six people for a total of 12 per ride. The way the coaster is laid out, the train returns directly to the station, and the compact design does not allow for another train on the track.
Blueprints are out there, as well as permits, and now these plans. It looks like it’s going to be a reality, but we can’t help but think that Busch Gardens would do a little more with the design to compensate for the large crowd that the park attracts.
Again, at this point it is all rumor, and it’s not official until Busch Gardens makes an announcement. For more Busch Gardens Williamsburg rumors, visit BGW Fans.