Orange is the new track-Thunderbird track arrives at Holiday World

For more information about Thunderbird at Holiday World, including tickets, visit the official website by clicking here! It’s all about timing. Less than a week ago Holiday World in Santa Claus, Indiana announced that they would be installing the world’s first B&M launched Wing Rider coaster.  This week the park started receiving truck loads of orange track. The track will be installed as part of Thunderbird, the first launched B&M coaster in the world. 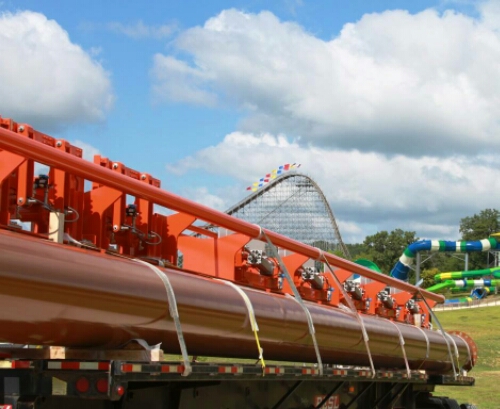 The all new coaster will be the first major steel coaster at the park, and will feature many inversions, including a huge 125 foot tall loop. That’s a pretty big deal for a park known mostly for their wooden coasters. The coaster will launch from 0 – 60 mph in three seconds and will take riders on a ride through the woods and over the park’s legendary coaster The Voyage twice.

The coaster will be 3,035 feet long, which calls for a lot of pieces. On Monday the park trucked in 29 huge truckloads of track to begin the major construction process.
The park made the announcement just last week, knowing that the track would be delivered. The pictures above,  from the official Holiday World Facebook page, shows off the gorgeous orange track that will make Thunderbird soar.
Thunderbird, which will mix a farmhouse theme with the Native American legend of The Thunderbird,  will be located in the Thanksgiving section of the park. That area is already home to The Voyage.

Thunderbird is scheduled to open in 2015 at Holiday World. Stay tuned for more updates,  and be sure to get social with us on Facebook and follow along with us on Twitter @BehindThrills for the latest updates!