San Diego Comic Con is in full swing, and the best is yet to come as the massive Hall H presentation begins Saturday at 10 a.m. PST. However, those hoping to get in might be out of luck as people are already reporting lines that are miles long. Is it all worth it? 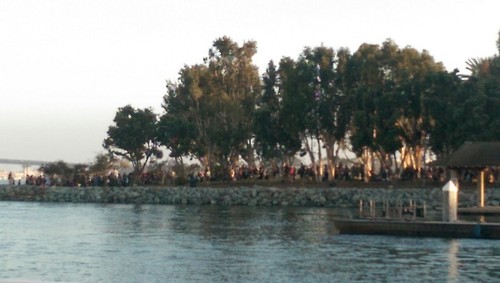 While the core of San Diego Comic Con is the show floor, the most anticipated attraction of the entire event is the huge Hall H presentation that happens every Saturday of the event. In the past, people have lined up for three and four hours. Last year broke records as people lined up for over ten hours to get a spot in the legendary hall. However, tonight we have reports of people lining up as early as 6p.m., that’s almost 16 hours before the very first presentation. The photo above shows people lined up on an island, almost a mile away. The latest reports had over 7,500 people waiting in line…the capacity of Hall H is just 7,500.

So the big question is, what’s the big deal? Is it really worth it?

The big deal is that most major studios reveal their huge plans for the upcoming year in Hall H. You also get exclusive give aways (sometimes) and even can see the stars of the films. In some cases, Q&A sessions are held. The biggest draw, however are the sneak previews of the films.

For fans, there is nothing better. You get to see trailers before they’re released, and even see extended clips and behind the scenes footage that others may never get to see. The internet is already buzzing with the pictures, posters and trailers that have already been released.

While not everyone can be in Hall H, we are lucky enough to have got in line at just the right time. The line stretches for miles behind us and it’s only getting longer. The first presentation will not be until 10 a.m. Saturday morning, but the fun lasts all day. Be sure to stay tuned for more coverage from SDCC and be sure to get social with us on Facebook, and follow along with us on Twitter @BehindThrills for the latest updates!