Downtown Disney is about to fade away as Disney Springs slowly bubbles to life. Walt Disney World has opened a very important part of the new expansion, as Imagineers celebrate the story behind the new area. All of this is just part of the huge expansion project that will completely transform the dining and entertainment district over the next few years. 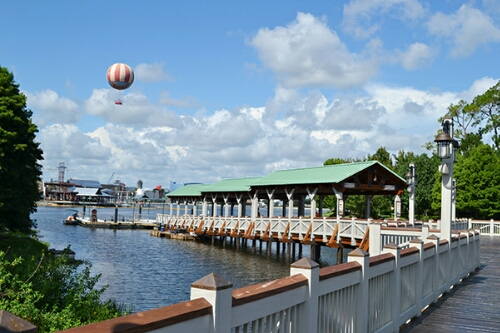 An all new bridge and walkway was officially opened at Downtown Disney on Tuesday. The bridge is a very important part of the expansion,  as it offers a path from Saratoga Springs Resort to Downtown Disney.
In addition, Disney Imagineers are talking about a  few of the story elements that Disney Springs will have when it is complete.

Video – The details of the Disney Springs story

Disney Springs will be made up of three separate districts, or neighborhoods. Each will offer a different feel and have different offerings. There will also be more stories fleshed out as construction continues. The inspiration for the new area will be very much Florida based, bringing in the charm of old Florida towns.
The first area is expected to be open in 2015, and should include the all new parking structure.  That should make for less frustration in the area though traffic will still be a nightmare,  as an I4 interchange is being built. The Landing will be the first glimpse of Disney Springs,  with the rest coming online over the next few years.
Stay tuned for more from Walt Disney World, and be sure to get social with us on Facebook and follow along with us on Twitter @BehindThrills for the latest updates!