Greetings…you may call me…Keeper, for I am the keeper of theme park tales. The heat of summer is slipping away, an melting into the cool shades of autumn. That can mean one thing, Haunt Season is right around the corner. As might be expected at this time of year, our tale today is an adventure from the pen of one of Universal’s Art & Design masters. Rick Spencer has been spinning tales of demons, misfits and horrors in the mazes and streets of Universal Orlando for as long as I can remember. He is responsible for many of the backstories that have fleshed out the event for many of the fans. Would you believe, he’s taken readers on adventures of a different kind?

Rick Spencer, come to find out, is a prolific author. In February of 2012, he published an e-book called “Icebound – The Viking Cipher” (click here to go to the official Amazon Page)

.  At the time of purchase, it was to support a man whose work I admired, even though I had no device to read it on. That changed a few months ago and I was able to explore this different world that Spencer crafted. 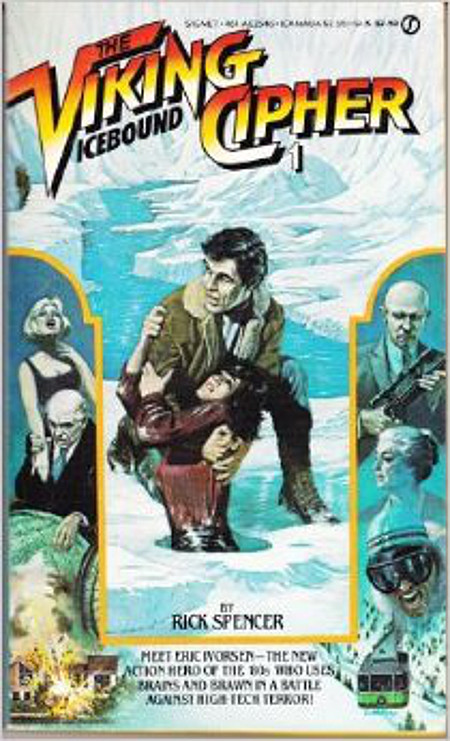 The original cover even looks like a damn Bond movie!

The story starts with a dramatic chase high atop the Swiss Alps that played out in my mind like the panagraphic vision from a James Bond movie. The events that start there take Eric Iverson on a cross country adventure where his life is threatened at every step of the way as he tries to unravel the mystery of the Viking Cipher, a mysterious discovery that his father died to protect. Along the way American reporter Maggie McCabe is brought into his life, and his bed, as she becomes the sometimes reluctant companion to the mystery. They narrowly escape with their lives over and over as they get closer and closer to unraveling the secret that may change the entire world as we know it. By the time the story ended I found myself not wanting to leave the Indiana Jones-type adventures of the Iverson and McCabe.

In researching a bit more I found that the story was originally published in 1983 as a paperback and that the Viking Cipher series is currently five books long. The Viking Cipher series continued with Iversons adventures through “All that Glitters”, “Moneymaster”, “The Terror Merchant” and “The Devil’s Mirror”. The series never concluded, so there is always the possibility that Spencer will re-visit the characters. Those paperback books are understandably out of print, but are available if you look in the right places. Rick’s Amazon page lists several of the books for sale, click here to find out more.

I do have a selfish motivation for mentioning this series to you to begin with…if perhaps a few more of you explore the world of Icebound..the other volumes might come around to an e-reader near you sooner rather than later.

Just a little something to hold you over, and remind you that, even when you are not looking for it…

Stay tuned for more of Keeper’s Tales, and be sure to get social with us on Facebook, and follow along with us on Twitter @BehindThrills for the latest updates!

For more information about The Viking Cipher, or to order the Kindle Edition, click here!