Today the world is a little less funny because one of the funniest men on the planet has left it. Actor/Comedian Robin Williams has passed at the age of 63. While that is definitely a somber occasion, let’s look at the fun that he left this world with, and the influence he had on the theme park world. Williams starred in the Disney animated film, Aladdin, as the very elaborate and animated Genie. His portrayal of the blue being with “PHENOMENAL COSMIC POWERS! (itty bitty living space) helped to set the tone not only for the whole film, but also for many films to come. However, Robin Williams also had a huge part in the Disney theme park empire as well. 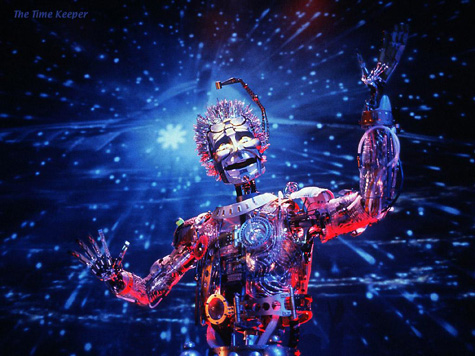 The two main attractions that come to mind is “The Magic of Disney Animation” at Disney’s Hollywood Studios (then MGM). In the tour, guests were shown a film in which Robin Williams starred. He was a tourist who was then animated in a film called “Back to Neverland” in which he was a Lost Boy that was interacting with Peter Pan and other characters.

The film not only showcased Robin’s comedic abilities, but also was key in getting the guest submersed in the animation process.

The next, and my personal favorite, was Timekeeper. Timekeeper was a groundbreaking attraction in Disneyland Paris, Tokyo Disneyland and Magic Kingdom at Walt Disney World. The attraction took guests on a journey through time and literature to the future, and also the past. It was the first attraction to utilize the 360 degree circlevision technology for something other than landscapes. It also used audio animatronics to help the story along. Robin Williams was the voice of Timekeeper himself, a robot from the future who invented a time machine that could go through all periods and places in time. The attraction took guests all throughout time, but the most important was the meeting of the two amazing authors, HG Wells and Jules Verne.
Video-Go on the most fantastic journey of your lives

The attraction was groundbreaking for it’s time, although it’s been since replaced. The attraction, and Timekeeper, showed us the importance of imagination and how using it could change the world, and shape our futures. Again, Robin Williams provided his signature insanity to the role and kept us all entertained as well as intrigued.
Timekeeper would lay the ground work for several other attractions, though no one could replace Robin Williams. His love of comedy was present in everything he did. He was an amazing actor outside of comedy, and even won an academy award for a more serious role in Good Will Hunting. However, the world was a brighter place because his Timekeeper took us on an adventure into the past and towards tomorrow. Genie helped to push us to a whole new world, while laughing the entire way.
Our thoughts and prayers go to his families, as do our thanks for sharing him with the world.
Disney has released a statement about the passing of this Disney Legend

The following statement is from Robert A. Iger, chairman and chief executive officer, The Walt Disney Company:

We’re deeply saddened by the loss of Robin Williams, a wonderfully gifted man who touched our hearts and never failed to make us laugh. An incredible actor and a comedic genius, Robin will always be remembered for bringing some of the world’s favorite characters to life, from his zany alien on ABC’s Mork & Mindy to the irascible genie in Disney’s Aladdin. He was a true Disney Legend, a beloved member of our family, and he will be sorely missed. We join Robin’s friends and fans everywhere in mourning, and offer our thoughts and condolences to his family during this difficult time.