Permits have been filed, and concept art has gone up for what many are saying is the all new Clyde and Seamore show at SeaWorld Orlando. The show will open in 2015, and up until now we had no idea what the new show will use as a back drop. Now, it appears, Clyde and Seamore will go “Back to School”. The permits have showed up online as well as some really amazing looking concept art.

The all new concept art shows off a high school, stage, and various sports fields. The pirate ship will be replaced with lockers and the bow of the ship that had the head of Sir Winston Walrus will now have a water tower.

The new stage will also feature several new water elements. All in all, the new show looks very similar to Clyde and Seamore’s Cannery Row Caper at SeaWorld San Antonio. The water tower explodes in the end to send a trainer and sea lion spilling into the water below. 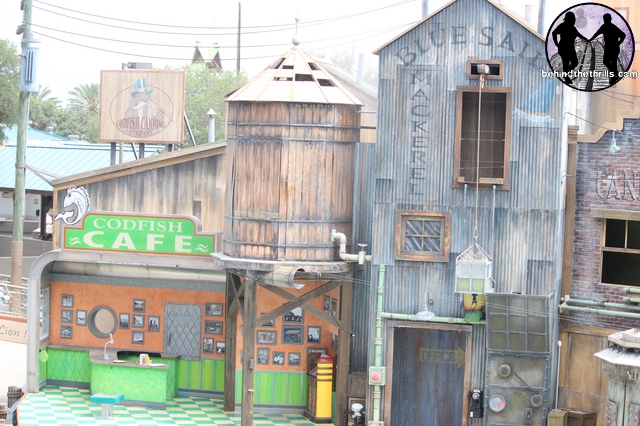 Cannery Row is set to close on September 1st at SeaWorld San Antonio, so it’s very likely that a lot of the set pieces for the shows will become interchangeable. The stage layout is very similar, and they could easily be repurposed.

Blueprints show off even more of the props and gags in the show. The one thing that it doesn’t show is whether or not the new show will have mimes. The Pirate Mimes have been a huge part of SeaWorld Orlando’s  Clyde and Seamore show. The mimes would come out and do a pre-show, having fun with the audience and playing with people as they came into the theater. While it’s not said if mimes will be a part of the new show, the silent class clowns could easily be done worked into a high school setting.

Clyde and Seamore take Pirate Island closed earlier this month after 15 years at SeaWorld Orlando. It was full of pirate fun, and silly puns, as well as sea lions.

While there are permits and concept art filed, there is no word on whether or not this is the final concept for the new show. So, until SeaWorld officially announces it, keep this as a rumor.

Whatever the new show ends up being, will make it’s premiere in early 2015.

Stay tuned for even more from SeaWorld Orlando, and be sure to get social with us on Facebook, and follow along with us on Twitter @BehindThrills for the latest updates!