The Justice League will battle for Metropolis at Six Flags Over Texas and St. Louis!

The dawn of justice may be a few years away with the Batman vs. Superman film, but that’s not stopping Six Flags from doubling down and bringing a jaw dropping new attraction to two of their parks for 2015. Get ready for battle as Six Flags Over Texas, and Six Flags St. Louis will put guests in a Battle For Metropolis! 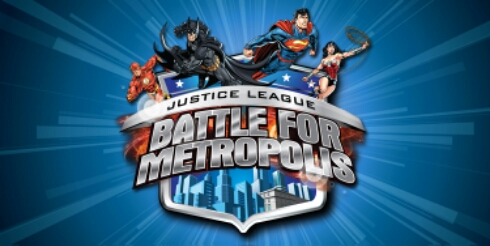 The Justice League has been a staple in comics for decades. The team of superheros will be coming to the big screen in the next five years, but first, at both Six Flags Over Texas and St. Louis Justice League will take guests through the streets of Metropolis to battle the Joker and other bad guys. Guests will be armed with a stun gun to zap the bad guys in a mix of 3D screens and interactive shooters. The attractions will also feature realistic animatronics based on popular DC Comics characters.

The ride will be built by Sally and will use a full roster of Justice League characters. Sally has developed Justice League attractions before, but not like this one. This all new creation will take riders through a battle against Lex Luthor and the Joker, and will feature a fleet of all new cars that aren’t your standard scoot and shoot. The new cars will be able to move several different directions at once, giving an experience not unlike the The Amazing Spiderman.
We actually caught up with Sally Dark Rides own, John Wood to talk about their previous Justice League attraction.
Video – John Wood talks about Justice League

Justice League- Battle for Metropolis will hit the parks in Spring of 2015.

Six Flags unveils new attractions for every park in 2020