Universal Orlando to host A Harry Potter Celebration again in 2015

Harry Potter fans get ready,  the time to celebrate the boy who lived has come once again. Universal has announced via their official blog that they will be bringing back the hugely popular Harry Potter Celebration weekend in January of 2015. In 2014 Universal brought out stars of the films, and had a huge Harry Potter Expo in which special merchandise and demonstrations Gabe fans a look at everything that has been inspired by Harry Potter. 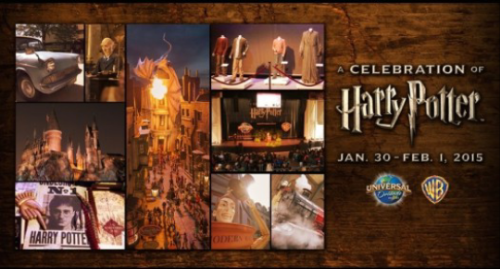 The huge celebration will kick off on January 30th and will feature a ton of events geared towards those who love Harry Potter. The event will include a Harry Potter Expo,  demonstrations from the crew of the film, as well as Q&A sessions with the cast of the Harry Potter films.

During the 2014 Celebration,  there were huge wand demonstrations with the wand combat choreographer, special meet and greets with the cast of the films and much more.

For the super Harry Potter fans, there will be a special package for the event, which will give those who love the boy wizard even more magic.
Here’s a few details about the special package:

Stay tuned for more details on The Harry Potter Celebration, and be sure to get social with us on Facebook and follow along with us on Twitter @BehindThrills for the latest updates!

For more information about the Harry Potter Celebration at Universal Orlando, visit the official website by clicking here!